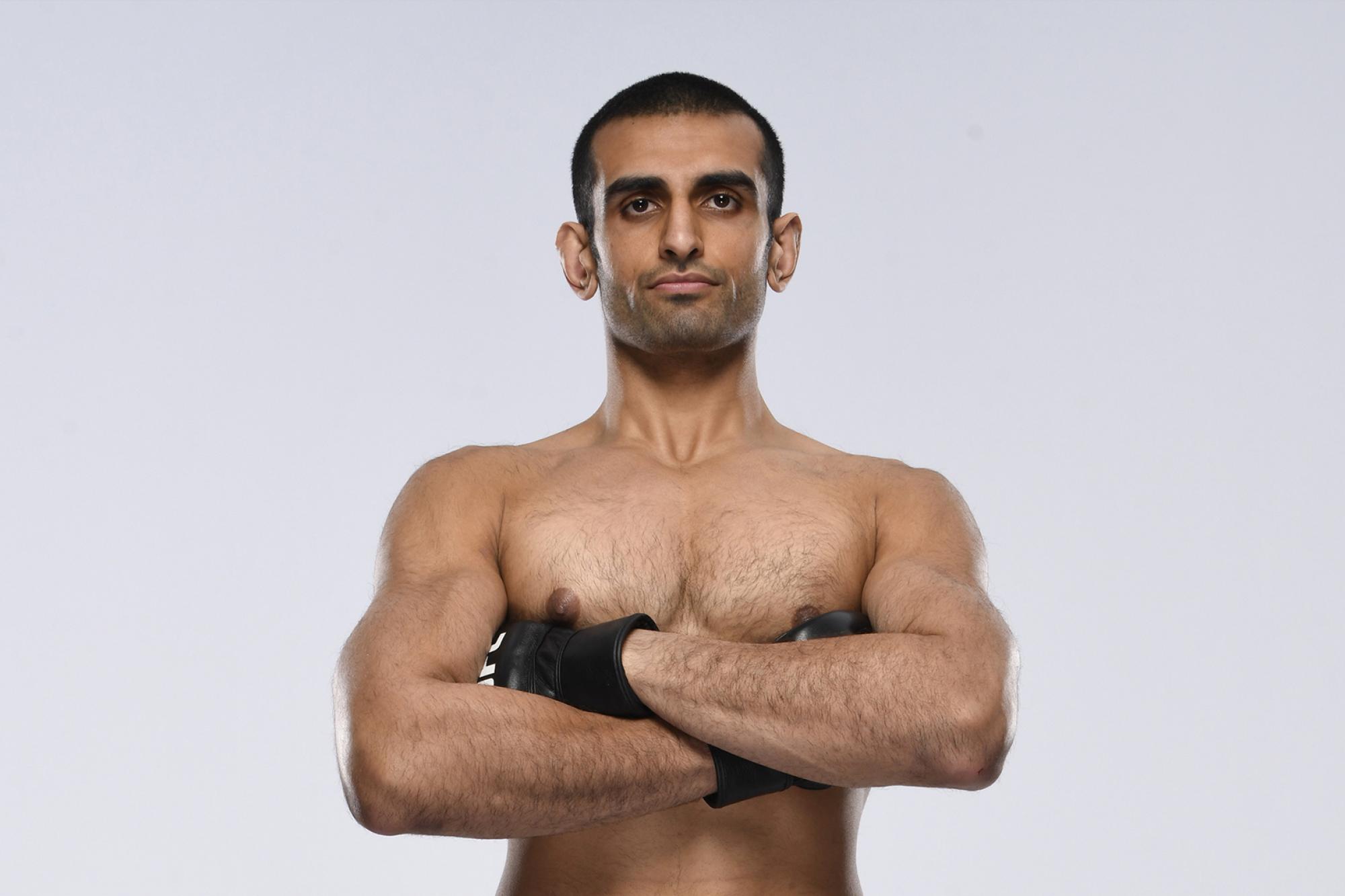 After Dropping His First Professional Fight, KB Bhullar Is Determined To Get Back In The Win Column At UFC Fight Night: Reyes Vs. Prochazka
By Gavin Porter, on Twitter: @PorterUFCnews • Apr. 30, 2021

When KB Bhullar was imagining his UFC debut last October, he envisioned getting that incredible knockout and announcing that he was going to be the next big thing.

It took less than 120 seconds for that vision to be replaced by the memory of being knocked out, as Bhullar would get suffer his first professional defeat at the hands of Tom Breese on UFC Fight Island.

“If it doesn’t go your way the way you picture in your head, it’s disheartening at first. But mentally there is no other way but up and that’s the approach you have to take,” Bhullar told UFC.com. “It’s not a good feeling but you can’t obsess about it too much. You can’t get too wrapped up in thinking that you lost and now you’re not this fighter that you thought you were or that you lost your undefeated record. You can’t get too swept up in that; you have to understand that losing is an integral part of the game and it’s your opportunity to grow, learn and come back stronger. You can either allow it to defeat you forever or you can grow and get better. I chose to take the latter path.”

Bhullar (8-1) has spent the last six plus months waiting to get that “bad taste” out of his mouth. He sat back and put in the work that he believes will make the difference when he faces Andreas Michailidis at UFC Fight Night: Reyes Vs. Prochazka.

“I just wanted to erase that bad taste in my mouth. Winning fights is the best feeling in the world for me, that’s what I live for."@KB_Bhullar is determined to get his first career @UFC victory at #UFCVegas25 🔊⬆️ pic.twitter.com/gjfOSOgbUc

Even though the 29-year-old handled his first loss the right way, he certainly will do everything in his power to make sure he gets back on track.

“I just wanted to erase that bad taste in my mouth. Winning fights is the best feeling in the world for me, that’s what I live for,” Bhullar said. “When you put it on the line, you have to train hard, and the discipline you have to carry throughout your whole life and to perform and to win is the best feeling. But when you come up short, it’s the worst feeling. I just want to get that out of my system and get back to my winning ways.”

The 29-year-old Canadian doesn’t care about the path he will have to take to beat Michailidis on Saturday; he believes he is prepared for anything that comes his way. “The Bengal” believes the key to victory is being mentally sharp and being an opportunist.

He knows he has to respect his opponent’s kickboxing and be well aware of how well-rounded the Greek middleweight is. He also knows that Michailidis is in a similar boat and mindset, as Michailidis suffered a TKO in the first round of his UFC debut, too. 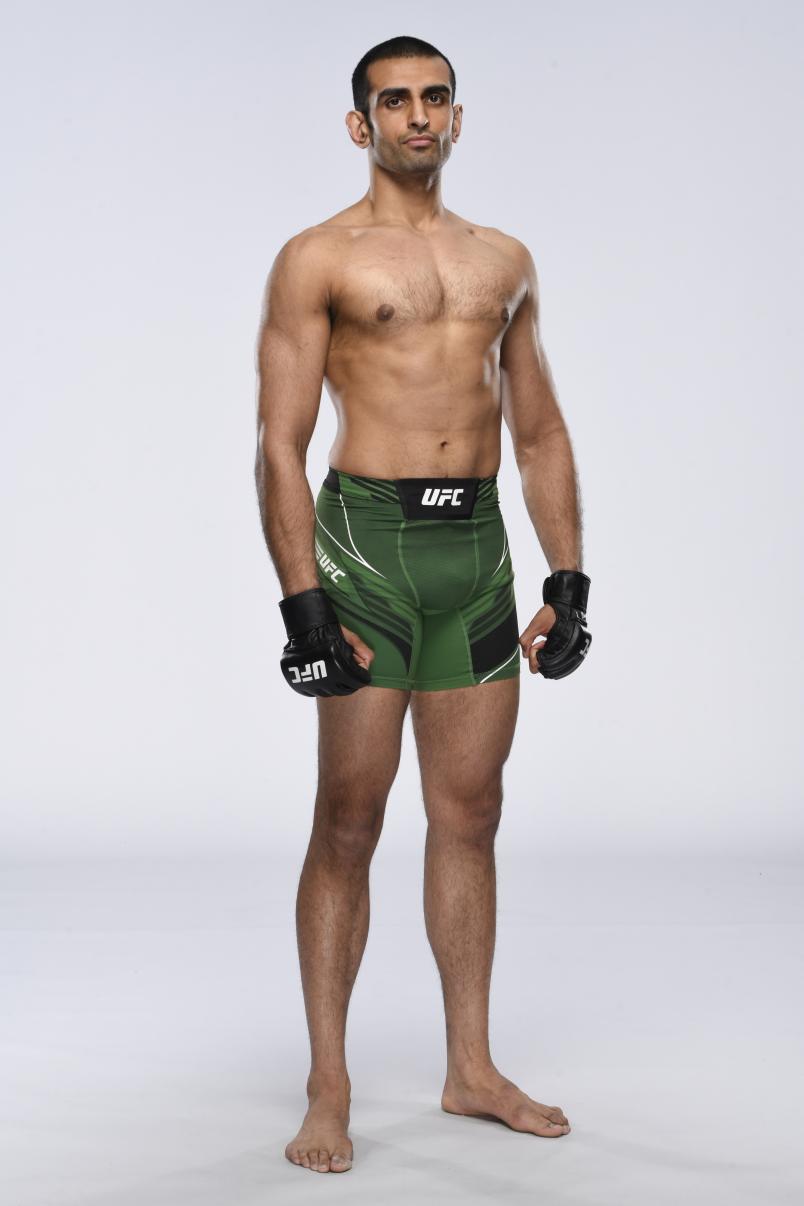 KB Bhullar poses for a portrait during a UFC photo session on April 28, 2021 in Las Vegas, Nevada. (Photo by Mike Roach/Zuffa LLC)

“He brings all the skills you would want to see a UFC fighter bring to the table, and for me, likewise, man,” Bhullar said. “It’s a battle and it’s a fun fight with strikers that can mix it up.”

Both fighters are looking to prove themselves and that, combined with their intriguing styles, makes for one heck of a fight. It’s exactly the type of fight that Bhullar needs in order to fully move on from the feeling of his debut.

That’s all that he can focus on and that’s his goal.

“Nothing past Saturday matters for me,” Bhullar said. “Decimation, annihilation, destruction. Just get this guy out of there. That’s my goal.”