Heading into her second UFC fight, Kay Hansen hopes to build a reputation as a "game" fighter.
By Zac Pacleb, on Twitter @ZacPacleb • Nov. 12, 2020

From signing a UFC contract to making the ever-so-important debut, Kay Hansen didn’t really have time to take it all in when she made her first walk to the Octagon at UFC Fight Night: Poirier vs Hooker in June. Once things slowed down, though, the 21-year-old had plenty to celebrate: a third-round submission win and a Performance of the Night bonus.

“Everything was like go, go, go from the time that I got the call to getting my medicals to coming out here,” she told UFC.com. “So that whole experience was awesome. Kind of trying to take it all in at the end was like, ‘Whoa. That just happened.’”

Hansen’s win over fellow Invicta FC veteran and UFC debutant Jinh Yu Frey didn’t come without its adversity. The judges gave each fighter one of the first two rounds, which made Hansen’s armbar submission all the more important.

Success aside, the experience was not only a memorable whirlwind for Hansen, it was a turning point.

“For me, I just realized I had to level up as a professional athlete,” she said. “Just make smarter training choices like who I train with and what I’m working on. I would just kind of train what I wanted to train, instead of now, I feel like I’ve just made a lot of improvements on what I need to really improve.”

Having several weeks to prepare helped create a more regimented training camp. Hansen said she got the call to fight strawweight prospect Cory McKenna this Saturday at UFC Vegas 14 about 12 weeks before fight night, a big switch from the usual short-notice business in which Hansen partakes. With the surplus of time at her disposal, Hansen tabbed Tyler Wombles, Joe Murphy and Erica Rodriguez out of Classic Fight Team in Southern California, a group she describes as her “perfect corner.”

Lined up against McKenna, who earned her contract this year on Dana White’s Contender Series, UFC matchmakers pit two of the freshest (and youngest) faces in the strawweight division. Neither fighter is in a make-or-break situation in this bout, but it is an early test for two careers in comparable positions, and Hansen hopes the bout is an avenue to show more of her well-rounded skillset.

“It’s a fight with new blood. We just got bumped up to the main card, and I feel like that’s a big thing,” Hansen said. “That goes to show that they have their eyes on both of us, but especially the person who ends up winning this fight.” 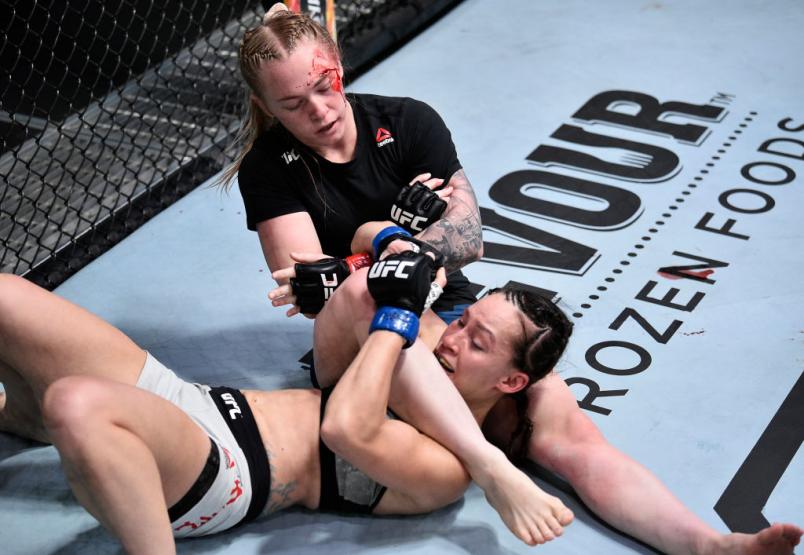 A lengthy training camp comes with its own challenges, mainly regarding a fighter’s patience. Hansen said it’s a bit of a cat-and-mouse game of when to go hard and when to tone it back. Even though she also sees the value in the added space to think and ramp up to fight week, she does admit short-notice fights are still her preference, which falls in line with the kind of career she hopes to build.

“I’ve just taken any opportunity that comes,” Hansen said. “I don’t turn things down. I just say yes. An opportunity is an opportunity, and I intend to make the best out of every opportunity I get. I want to be the best, and I want to fight the best, but I don’t just want to get the belt and have the belt. I feel like, sometimes, people have the belt, and the fans are like, ‘Oh, you know, cool,’ but sometimes there’s fighters that never get the belt that fans just love them and they rave over them, and I want to be a combination of both. I want to be a champion that’s just game. No matter what, no matter what’s thrown at them, who’s thrown at them, how much time they’re given to prep for a fight, two days’ notice, 12 weeks’ notice, I just want to be known as the fighter who just shows up and just gives it everything.”

When she makes her second walk, she’ll show the mixture of enthusiastic maturity that marked her debut. Hansen compared the journey to the Octagon to a kind of out-of-body, dreamlike experience, but when she reaches the cage, she locks in and readies herself to get the job done.

“I feel like I’m kind of watching myself walk out, she said. “I feel like it’s kind of like a crazy experience for me. A lot of emotions, but I try to block a lot of them out. I try to just focus on the task at hand. I train every single day. I spar. I drill. I do everything every single day, and I just try to treat it as that as best as I can, but for me, once I get there and once the bell goes, I feel the most comfortable for sure.”