Katsunori Kikuno: Karate is Back 2.0

"My fight style is different from Lyoto; it’s an old Okinawa Karate
style. It’s kind of funny for me to say this, but it’s a comic
book-like mysterious style." - Katsunori Kikuno 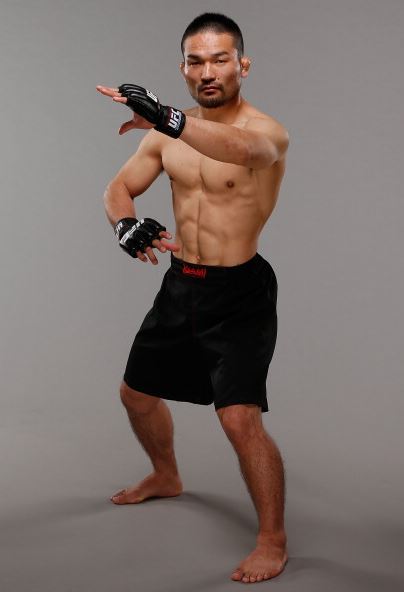 When Lyoto Machida won the UFC light heavyweight title in 2009, his post-fight declaration that “karate is back” rallied the troops that wore the gi and studied the art in its various forms. One of those who was happy to see karate represented so impressively in the Octagon was Japan’s Katsunori Kikuno.

“Where most fighters adopt technique from boxing and Muay Thai, Lyoto was able to become UFC champ using his karate skills, so I consider him as one of the greatest fighters,” said Kikuno through translator / manager Shu Hirata. “Including myself, he has provided a dream to all these people that love karate.”

Kikuno, who makes his UFC debut this Saturday in Singapore against Quinn Mulhern, still proudly represents karate in competition, but with a blend of the Kyokushin and Okinawan Kempo schools, his style may not be what you expect after seeing Machida in action.

“My fight style is different from Lyoto; it’s an old Okinawa Karate style,” he said. It’s kind of funny for me to say this, but it’s a comic book-like mysterious style.”

It also produces plenty of action and knockouts, a nod back to Kikuno’s roots in Kyokushin Karate, which he studied for five years after high school following a long stint in judo. And if you’re not familiar with Kyokushin Karate, let’s just say it's pretty hardcore.

“In Kyokushin Karate tournaments, with bare hands and bare feet, all competitors must fight multiple times in one day, and each fight may even go to an extra round, so it’s a very tough competition. I believe these experiences got me stronger both mentally and technically.”

Not that life got any easier once he transitioned to MMA at 23 years old, because once he began pursuing a career in the fight game, he was tutored by one of the most underrated fighters who ever competed in the Octagon, Tsuyoshi “TK” Kosaka, and is you’re going to train with him, you better be able to keep up.

“In terms of the transition to MMA, at first I was not used to punching the opponent in the face, and also being punched in the face,” said Kikuno, who nonetheless was a quick study in the game, in no small part due to the teachings of Kosaka.

“Kosaka-san has an enormous amount of knowledge, and he also has a very flexible mind so he always provides precise and useful advice,” he said. “And he is a fantastic individual as well. I am proud to be his student, and right now he is teaching me how to use the cage and fight under the UFC rules.”

Fighting in the Octagon has been an issue for some Japanese fighters in the past, despite long runs of success back at home. Kikuno, a former DEEP lightweight champion, has had plenty of success since turning pro in 2005, but after some hit and miss efforts in which he defeated Kuniyoshi Hironaka and Daisuke Nakamura but lost to Mizuto Hirota, Gesias Cavalcante, and Eddie Alvarez, he has hit his stride recently, winning five straight.

“From about two years ago, I started to train Okinawa Kempo Karate and that probably is the main reason why I have been doing well,” said the 32-year-old Kikuno, who says that the call he got from the UFC recently came at the perfect time.

“I got an offer from UFC when I was finally feeling ready to fight in the world's best competition, so this is a good timing for me.”

He will have a mountain to climb in his debut – literally – when he faces the 6-foot-3 Mulhern, who is making his first start at lightweight.

“I think it will be difficult to fight a guy who stands at 190 cm tall,” said the 5-foot-8 Kikuno. “Both in standing and on the ground, I am going to experience something new.”

True. But then again, Mulhern has probably never seen anything like Katsunori Kikuno, a fighter who wants to show him that karate is back again.