How did Chookagian earn a title shot against Valentina Shevchenko? Read on to find out how we called six of her biggest UFC fights.
By Thomas Gerbasi, on Twitter: @TGerbasi • Jan. 28, 2020

Traveling throughout New Jersey and New York to get her training sessions in with world-class coaches over the years, Katlyn Chookagian’s work has paid off to the tune of six Octagon victories that have earned the “Blonde Fighter” a shot at Valentina Shevchenko’s UFC women’s flyweight title in the co-main event of UFC 247 on February 8 in Houston. So how did Chookagian get here? Read on to find out how we called six of her biggest UFC fights.

Octagon rookie Katlyn Chookagian made a successful entrance to the women’s bantamweight division of the UFC on Wednesday, scoring a three-round unanimous decision over veteran Lauren Murphy in UFC Fight Night prelim action at the Denny Sanford Premier Center in Sioux Falls.

Chookagian’s stick and move attack carried much of the first round, with Murphy taking a while to get in gear offensively. When she did, her leg kicks were her primary weapon, but they weren’t slowing down the New Jersey product.

Murphy got the bout to the mat in the second minute of round two, allowing her to nullify Chookagian’s striking game, and she kept her opponent grounded until the end of the frame, her ground-and-pound assault working effectively.

Working her jab once more in the final round, Chookagian kept Murphy at bay with a busy attack, bloodying and frustrating the former Invicta FC champ. Finally, Murphy threw caution to the wind with under two minutes left and rushed her foe, but the clinch against the fence didn’t produce the desired result, and a takedown attempt in the final minute also didn’t allow Murphy to turn things around before the final horn.

The first woman to fight in the UFC, Liz Carmouche, made history again, becoming the first UFC athlete to fight and win in Madison Square Garden, as the No. 9-ranked bantamweight scored a hard-fought three-round split decision over New Jersey’s Katlyn Chookagian in UFC 205 action.

“She was a really tough opponent; I knew that coming in,” said San Diego’s Carmouche, who was in action for the first time since a win over Lauren Murphy in April of 2015.

Kenilworth’s Chookagian had some success early on, but once Carmouche was able to close the distance and get her foe to the mat she took control, with two takedowns and good clinch work keeping Chookagian on the defensive.

Carmouche kept the heat on in the second, with a thudding slam that ignited the crowd. But after a stalemate on the mat, Chookagian began to find her rhythm with her strikes in the final minute, and early in the third, a right kick to the head by Chookagian nearly ended the bout. With the complexion of the fight now changed, Chookagian went on the attack, but Carmouche was able to slow her momentum with a takedown. Midway through the final frame, Chookagian rose and again stalked the bloodied Carmouche, but the former world title challenger kept her at bay and finished strong.

In an exciting three-rounder that lived up to the pre-fight hype, Katlyn Chookagian picked up her second UFC win with a razor-thin split decision over Irene Aldana in women’s bantamweight action.

Both fighters got after it in a busy first round, with each fighter taking turns leading the exchanges. Aldana’s pressure allowed her to surge ahead late, but a brief takedown by Chookagian evened the score in a hurry.

The second was a carbon copy of the first with the exception of the previous round’s takedown, both going back and forth with each other in the pocket as expected while refusing to give up a lead.

In the third, Aldana appeared to finally break open a close bout with a surge of right hands in the final minute, but two of the three judges disagreed, with the final verdict going to New Jersey’s Chookagian by scores of 29-28 twice and 28-29. 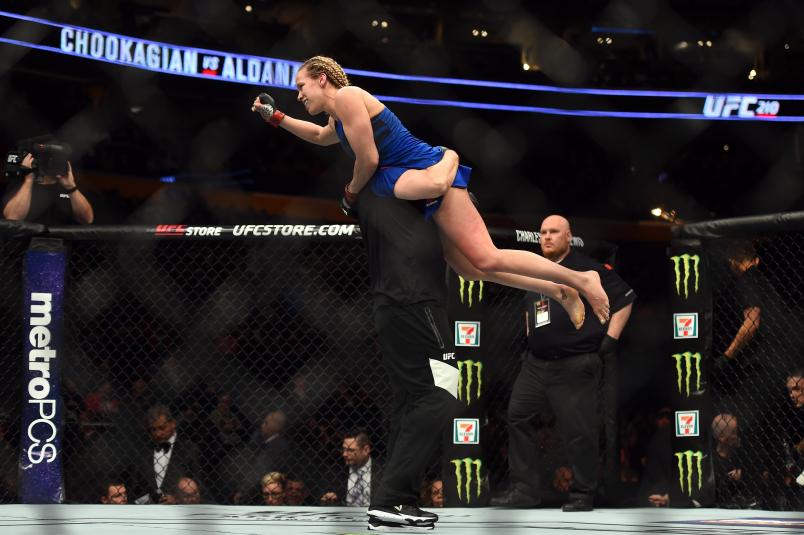 BUFFALO, NY - APRIL 08: Katlyn Chookagian celebrates with her corner after facing Irene Aldana of Mexico in their women's bantamweight bout during the UFC 210 event at the KeyBank Center on April 8, 2017 in Buffalo, New York. (Photo by Jeff Bottari/Zuffa LLC/Zuffa LLC via Getty Images)

BUFFALO, NY - APRIL 08: Katlyn Chookagian celebrates with her corner after facing Irene Aldana of Mexico in their women's bantamweight bout during the UFC 210 event at the KeyBank Center on April 8, 2017 in Buffalo, New York. (Photo by Jeff Bottari/Zuffa
2018
WUD3 Alexis Davis

Katlyn Chookagian made a statement in her bout against Alexis Davis, picking up the biggest win of her career via unanimous decision in a meeting of flyweight contenders.

Chookagian’s stick and move strategy worked like a charm in the first round, cutting Davis over the eye and bloodying her nose. The veteran Davis never stopped marching forward throughout, and while she wasn’t able to implement her ground game, her leg kicks kept coming, and they started taking their toll in the second round as Chookagian slowed down, allowing Davis to land more shots.

The No. 7-ranked Chookagian (11-1) amped up her work rate in the third round, though, and while the No. 3-ranked Davis (19-8) got a late takedown, it wasn’t enough to turn things around, as the New Jersey product emerged victorious via scores of 29-28 twice and 30-27.

In the opener at United Center, Katlyn Chookagian won a close, but unanimous, decision over fellow flyweight contender Joanne Calderwood.

Good work was done by both fighters in a first round waged entirely on the feet, but the most notable damage was done by Calderwood, who battered Chookagian’s left leg with kicks.

Switching things up early in round two, Calderwood scored a quick takedown, but Chookagian got to her feet almost immediately and began landing the crisper strikes, led by a laser-like right hand that kept finding its mark. Another Calderwood takedown punctuated the latter stages of the round, and this time “Jo Jo” kept her foe grounded until the horn, even though Chookagian was the busier of the two on the mat.

By round three, each combatant was showing the wear of battle, but neither was backing down. Calderwood got a third takedown just before the midway point of the round, but it was a point-scoring device more than anything, as the Scotland native let her foe back up quickly. And while Chookagian kept pressing, some late-fight showboating Calderwood didn’t help “Jo Jo,” who fell short on the scorecards. 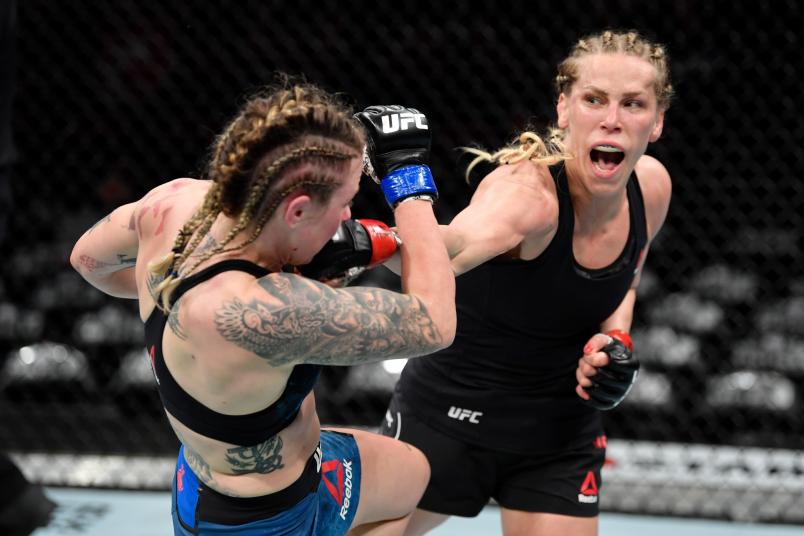 CHICAGO, IL - JUNE 08: (R-L) Katlyn Chookagian punches Joanne Calderwood of Scotland in their women's flyweight bout during the UFC 238 event at the United Center on June 8, 2019 in Chicago, Illinois. (Photo by Jeff Bottari/Zuffa LLC/Zuffa LLC via Getty I
WUD3 Jennifer Maia

Two of the top contenders in the flyweight division, this one became a catchweight affair after Maia missed weight.

The opening round was largely a textbook showing by the top-ranked Chookagian, who used her length and reach to get her shots off and avoid the majority of the return fire coming her way. While Maia looked to clinch at one point and find a home for the occasional punch, Chookagian did a good job of varying her offense, landing and slipping out before the Brazilian could connect with any real pop.

Chookagian took it up another notch in the second, adding even more variety in her offensive output while mixing in both physical and audible fakes and feints that kept Maia off balance. The Brazilian started to have a little more success over the final two minutes, connecting with a couple right hands over the top, but Chookagian was constantly circling away from the power shots and responding with combinations of her own whenever Maia would land.

Maia looked to make things interesting to start the third, closing the distance and intiating the clinch along the fence, but Chookagian was able to break free, exit into space and get back into her rhythm. Though Maia never stopped coming forward, she simply wasn’t able to pin down Chookagian and connect with anything that shifted the momentum in her favor or gave her a chance to finish, squandering a late takedown by hanging out in half-guard offering little offence.

After going the full 15 minutes, the judges were called upon to declare a winner, with all three officials seeing the fight in favor of Chookagian.