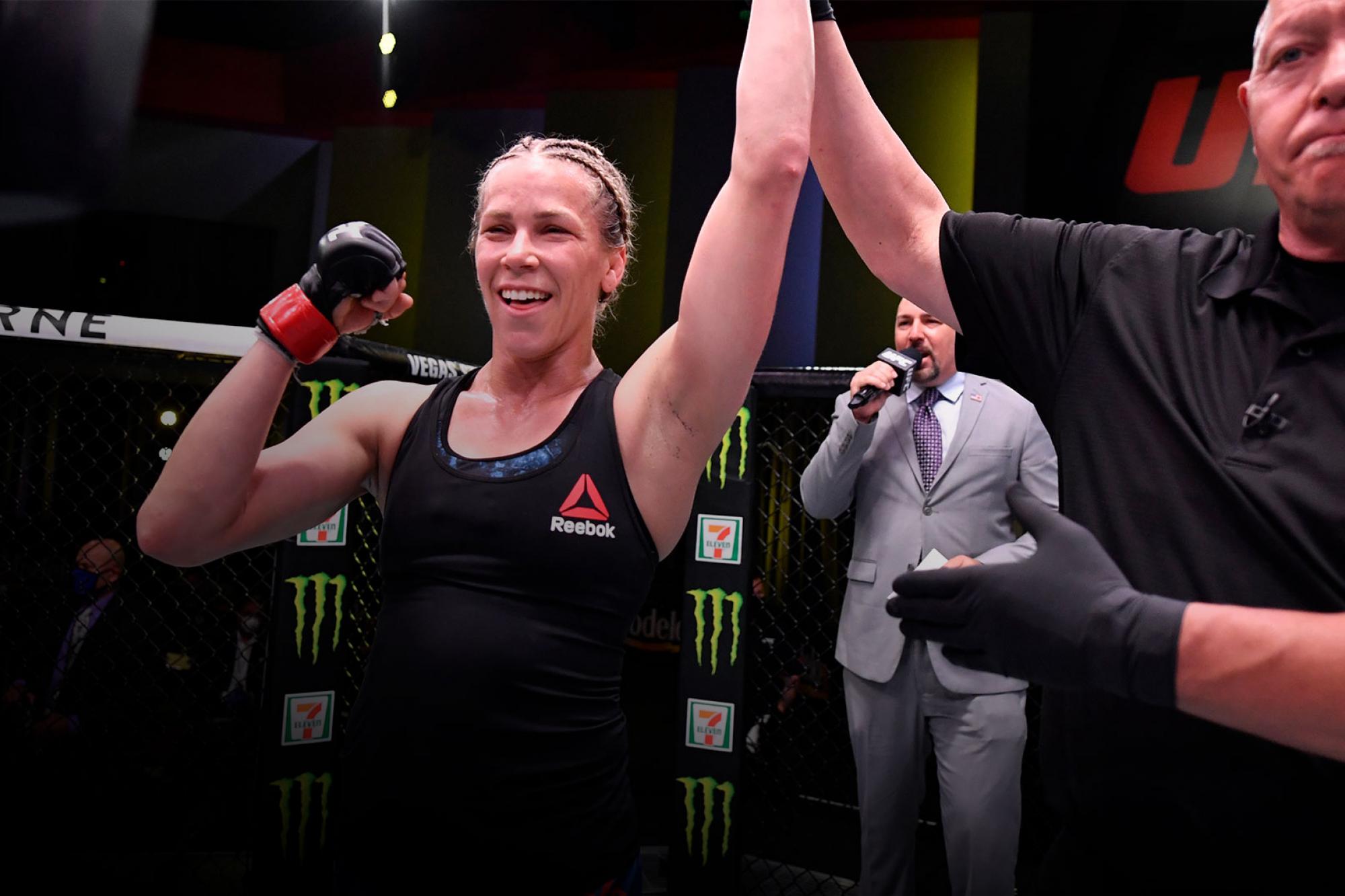 Katlyn Chookagian isn’t feeling the pressure of a co-main event fight against a former champ on Saturday
By Jon Gagnon • Oct. 16, 2020

The week of a big title fight or main event is often jam-packed for UFC fighters. A lot is at stake when your face is on the poster and you finally get the opportunity to put your life’s work on the biggest of stages to better your career. This isn’t something fighters normally admit to dealing with during fight week.

“I’m just treating it as any other fight,” is a common response to the pressures of a title fight.

When she talked with UFC.com this week, Katlyn Chookagian wasn’t shy about admitting that she performs better when not dealing with those pressures.

“My last fight was super important for me because it showed I’m not just a striker,” Chookagian said about her win over Antonina Shevchenko in May. “I’ve always known that, but my performances are mostly striking. Everyone thought I got better at wrestling. I think that the pressure of the title fight was off, so I was able to just go in there and fight like I do in the gym.”

Chookagian is referring to her February title shot against the other Shevchenko sister. Chookagian suffered her first loss that didn’t come by split decision when dominant flyweight champ Valentina Shevchenko stopped her in the third round.

But Chookagian bounced back instantly. She took a fight on short notice against Antonina and got back in the win column with a unanimous decision win. Now, after embracing a full fight camp, she’ll fight a former champion in Jessica Andrade.

“I think it’s a No. 1 contender fight for Jessica but not for me,” Chookagian said. “Realistically, if she gets a win, she’s fighting for a title. If I did, I’d be surprised because there’s other girls that haven’t fought Valentina. It’s the same mindset of the last fight of no pressure, so it makes it a little easier to perform.”

Chookagian said she had been begging UFC matchmakers for another fight soon, and when she found out it was Andrade, she was beyond excited.

“I just wanted to fight and didn’t care who it was,” Chookagian said. “When I found out it was Andrade, it made it more exciting. She’s new to the division and a former champion. Being a former champ, she brings a little more excitement to the division. In a division with a dominant champ you need more of those super fights or other stars so it brings a little more attention.”

In addition to the luster a former belt holder brings to the matchup, the fight got a boost to its anticipation level when it was slotted into the co-main event this week.

The fight will provide interesting aesthetics as Chookagian is one of the taller fighters in the division and Andrade - standing at just 5-1 ½ - is going up in weight to make her UFC flyweight debut.

“Everyone thinks if you’re taller you’re at an advantage,” Chookagian said. “That might be true for boxing but not always MMA. Once you’re clinched up it can be better for a shorter person. I’m used to being the taller fighter but she’s 7.5 inches shorter – it’s the same as if I fought Jon Jones. So it’s more of an adjustment than just the range. I have a guy at my gym who’s a wrestler and 5-foot-2, so I was lucky and got preparation.”

Chookagian is taking her optimistic mindset from her full training camp right into the Octagon on Saturday.

“As I get older I try not to worry about what other people think and just do it for myself,” she said. “When I have that mentality, I end up performing better. The only people I want to impress are me, my family and my coaches. That’s my mindset and I don’t listen to the outside energy.”