Katlyn Chookagian Wants To Make The Most Of Her Window

After An Active 2020, Katlyn Chookagian Hopes She Can Continue To Cement Her Status As A Top Flyweight Contender.
By Zac Pacleb on Twitter @ZacPacleb • May. 11, 2021

Twelve fights inside the Octagon makes Katlyn Chookagian a UFC veteran, which she knows but shies away from because it makes her “feel old.” But, for the 32-year-old flyweight contender, that experience has manifested into an increased confidence as a fighter both in the heat of battle and in the lab of training.

At 8-4 in the Octagon, Chookagian went through more highs than lows, especially at 125 pounds, where she is a mainstay in the Top 3 of the division. After losing her title challenge against Valentina Shevchenko at UFC 247, “Blonde Fighter” went 2-1 to finish an active 15-months in which she made the walk five times.

“When I started, if you would’ve said I was going to have 12 UFC fights, I couldn’t comprehend that,” Chookagian told UFC.com. “I feel like it’s happened so fast. I don’t know, at what point, when that happened, but I think the biggest part for me is just gaining confidence. I always said I want to keep fighting until I don’t want to do it or it’s kind of like, ‘ugh,’ annoying to go to training, or if I feel like I’m not getting any better, and every week, I’m like, ‘Oh my God. I’m doing this. I learned this. I’m getting better,’ so it’s just crazy to be ranked number two and I still feel like, every camp, I’m getting so much better, so in that aspect, I feel like I still have a lot more to do in my career.”

The last time Chookagian fought, bouncing back was top of her to-do list. Coming off a first-round TKO loss to Jessica Andrade (who was making her flyweight debut), Chookagian accepted a fight barely a month later against Cynthia Calvillo, which she dominated en route to a unanimous decision victory. 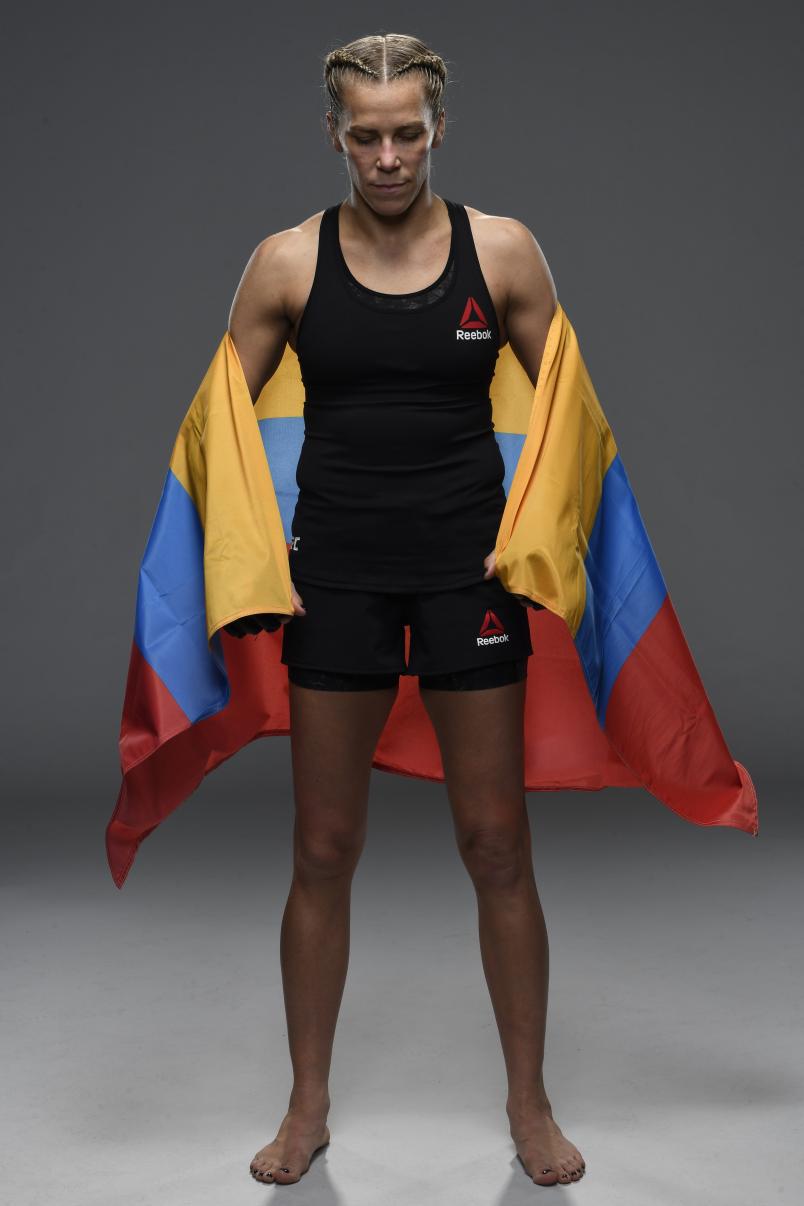 Her victory seemed particularly cathartic in terms of getting the bad taste of the Andrade fight out of her mouth, and it also re-cemented her spot at the top of the flyweight rankings.

After a relatively lengthy layoff (a whopping six months), Chookagian is set to take on Brazilian upstart Viviane Araujo, an athletic, skillful striker taking her biggest step up in competition after beating Roxanne Modafferi at the start of 2021. 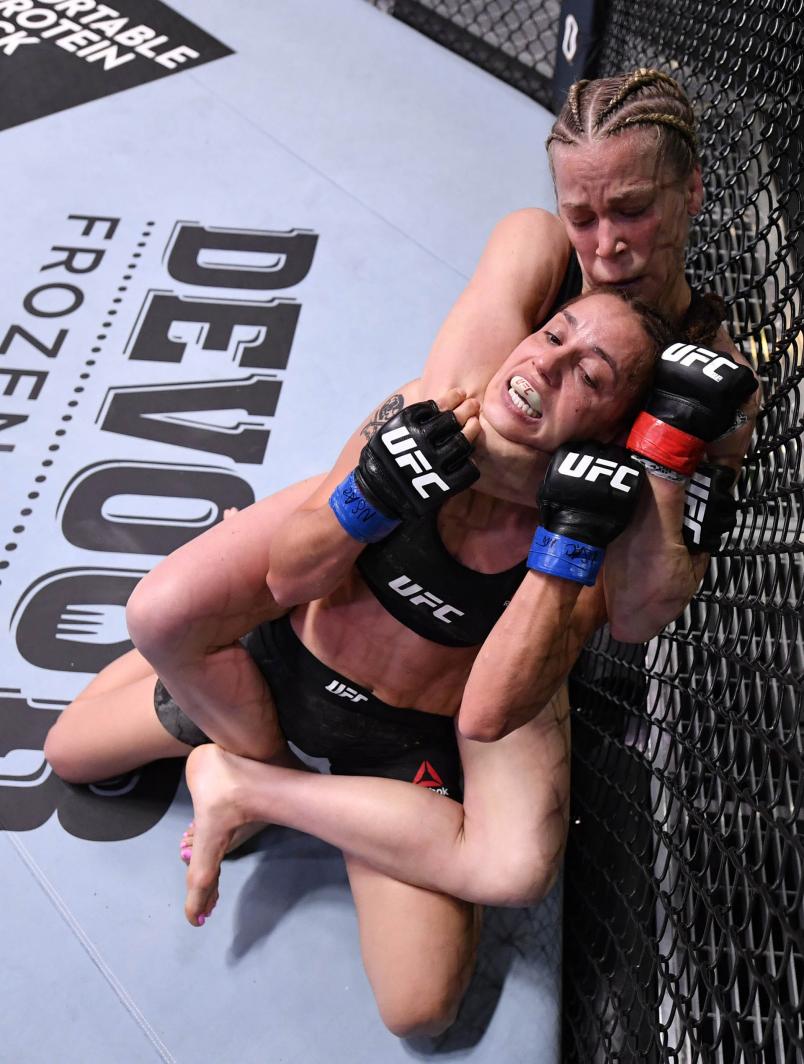 It’s a fight Chookagian had her eyes on for a while as Araujo made her way up the flyweight ladder. She admits to texting the UFC matchmakers constantly asking for fights when she saw some action in her weight class, and even said she’d be down to move back to 135 pounds if the fight makes sense. So, with Araujo in her sights now, Chookagian is eager to defend her spot near the apex of the 125-pound order.

“It’s a really meaningful fight,” Chookagian said. “She’s kind of been going up the ranks and making her way to be a well-known contender. I’m at number two, and I’ve been here for many years, so obviously the only way I can get to another title shot would be to keep winning. This fight is really important for us to really make a statement, and I think when two fighters have more on the line than just win or lose, I think that always makes for an exciting fight.”

In terms of the matchup, Chookagian respects Araujo’s striking and athleticism but just feels like her own abilities are “levels above” her foe. 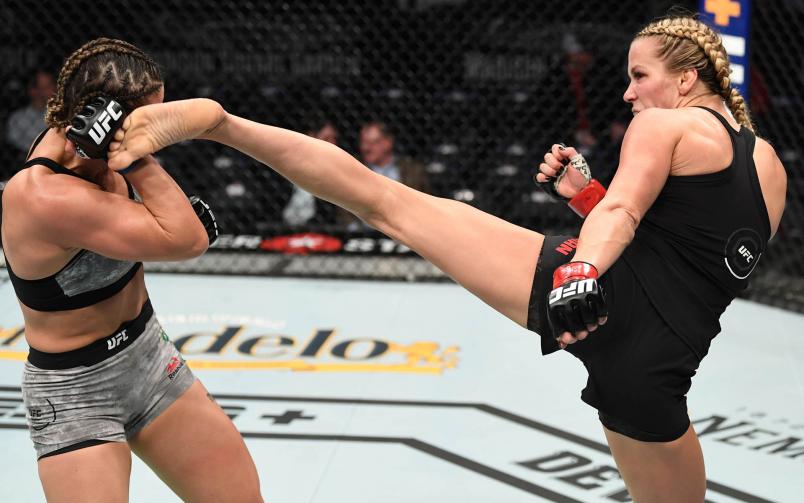 Katlyn Chookagian kicks Jennifer Maia of Brazil in their women's flyweight bout during the UFC 244 event at Madison Square Garden on November 02, 2019 in NYC (Photo by Josh Hedges/Zuffa LLC)

Of course, the fight game is unpredictable, and Chookagian knows that. While the focus is always winning, a frequent fighting schedule is also a priority. It’s what helps Chookagian continue her progression as a mixed martial artist going, and so far, it’s a formula that helped her develop into a veteran mainstay on the UFC roster.

“As an athlete, your window is very small,” Chookagian said. “I’m just trying to stay as active as I can. I don’t care who I fight, what rank, not even really what weight, just as long as I get fights as often as I can.”