Karl Roberson used to be known as the kickboxing guy, but after his latest submission victory, everyone knows he's capable of much more
By Thomas Gerbasi, on Twitter: @TGerbasi • Jun. 11, 2020

You ever have one of those days? Karl Roberson has, and in November, when he went all the way to Moscow to get into a fistfight with Roman Kopylov, an inadvertent eye poke almost turned the thrill of victory into the agony of defeat.

Not that the Neptune, New Jersey native was thinking of wins and losses at that precise moment in the third and final round.

“Oh s**t, I can't see,” he recalled of those moments as the Octagonside physician checked out his eye. Not that he told the doctor that.  “He said, ‘You want to fight?’ Yeah, I'm not about to stop now. Hell no. You suck it up, you push that good eye for a little bit more so you can see a little bit more, and you keep fighting. It's the heart. I can't help it. I love to fight, I love to push myself and I love competition, so I'm not gonna tap out or quit for nothing.”

When the bout resumed, Kopylov charged, Roberson met that charge, and at 4:01 of the final frame, “Baby K” had the submission win and a two-fight winning streak, not to mention another way to confuse the masses when it comes to defining his style.

“They keep calling me the kickboxer, and now they're starting to call me a jiu-jitsu guy, I don't know why,” Roberson laughs. “But I'm becoming a full mixed martial artist now. I'm dotting my Is and crossing my Ts and trying to get good everywhere so I can get to the top as fast as possible. That's my goal.”

Roberson, 29, can move closer to that goal this weekend when he faces Marvin Vettori in the UFC Fight Night co-main event in Las Vegas. It was a bout originally scheduled for May 13 in Jacksonville, but when Roberson missed weight and later fell ill that night, it was moved to Las Vegas on Saturday. In the meantime, what started as simply a nice matchup between two middleweight prospects has gotten a little heated. Bad blood or not, though, Roberson loves the fight. 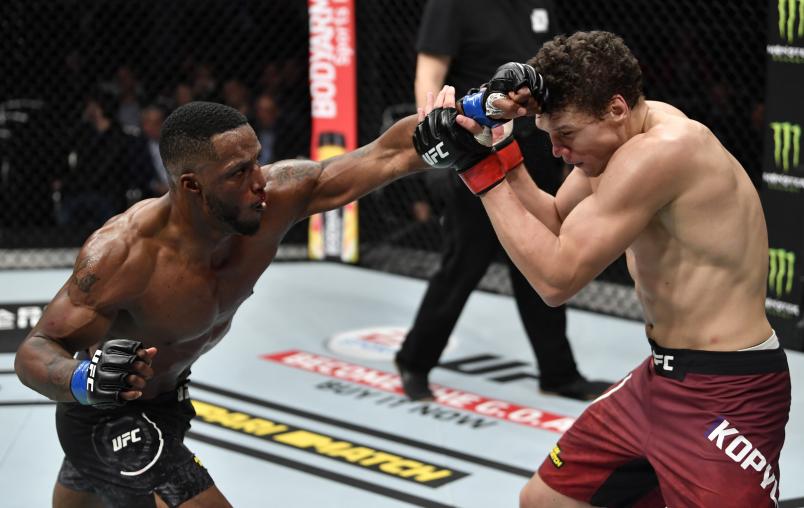 “We're both up and comers,” he said. “There's the top 15 and then there's the new guys coming in who are starting to destroy people. It's me and him, the best of the best right now in that section of the weight class, and we're gonna fight each other to see who's gonna take it to the next level. I'm excited about that because he likes to bang, I like to bang, he talks s**t, I talk s**t, and when we step into the cage, we both show up, so it's gonna be a good one.”

As for the prospect of punching someone in the face who wants nothing more than to punch you back, Roberson is all-in for that kind of scrap with Vettori.

“I love my job, so it's exciting for me just to get a fight,” he said. “I love to fight, I'll fight anybody anytime and that's my slogan and what I live by. If you want to fight, I'm gonna fight you. And from where I'm from, if you accept the fight, in my mind you think you can beat me, so now I gotta make sure that you know you can't.”

That’s what separates prizefighters from the civilians, and Roberson knows just how far he’ll go to get the win on Saturday night and beyond.

“I think that's more internal,” he said. “The way I grew up in the hood and everything, and the situations I've been in, you just can't give up. And I've installed that into my fighting career, and you've seen that from the beginning. I fight anybody, I never stop, I'm always pushing, I'll bang if you want to bang, I'll adapt, and it just comes from experiences in life. If you have certain experiences that you had to push through constantly, then you're not worried about any opposition.”

No matter what’s going on in the world outside the UFC Apex this weekend.