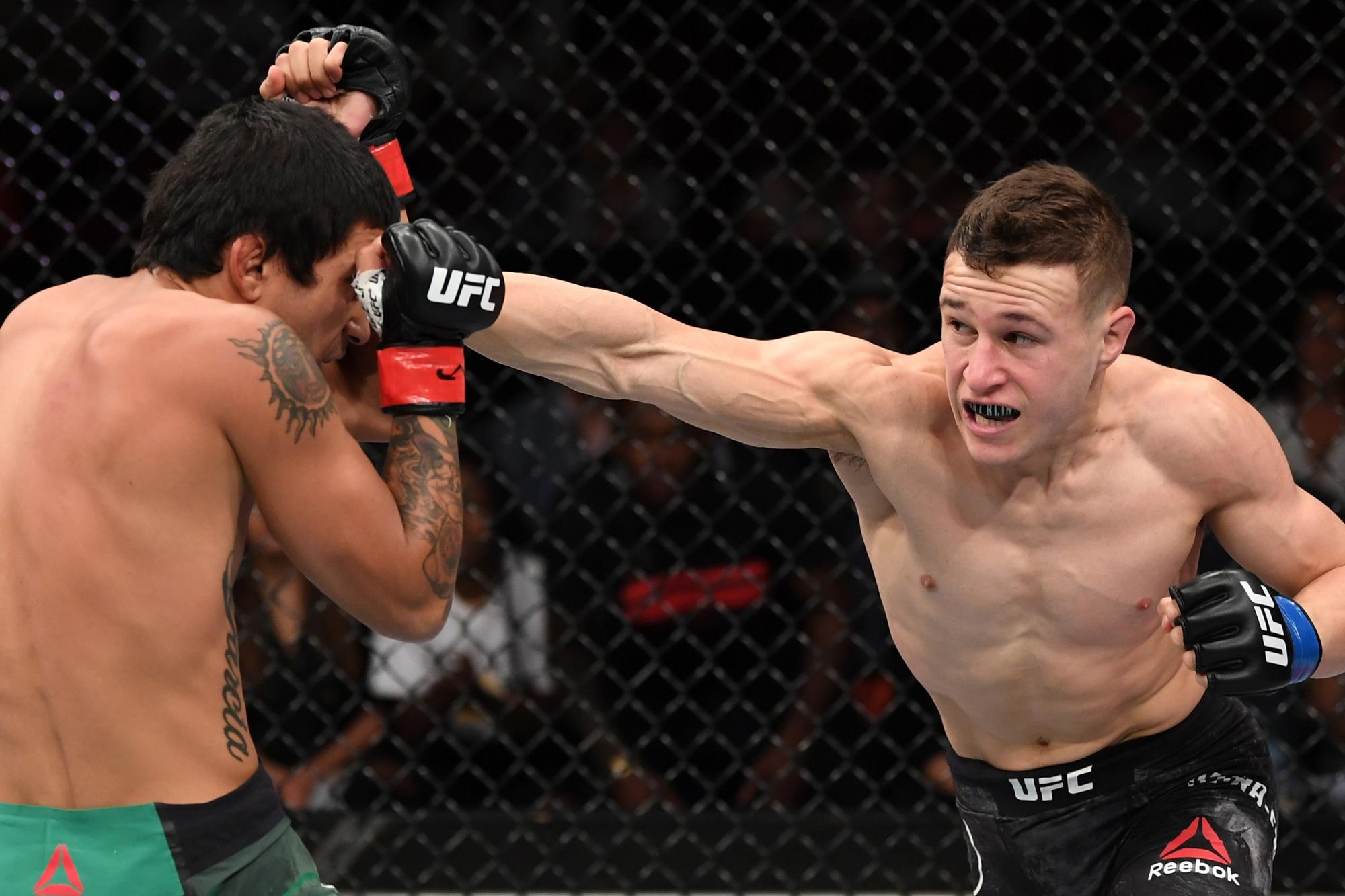 "Every time I fight now, I’m not just trying to win, I’m trying to be exciting, trying to get a finish, trying to educate people as to why flyweights should be in the UFC."
By Steve Latrell • Feb. 8, 2019

It had been too long and winding of a path to the UFC for Kai Kara-France not to make the most of it.

After a dominant Fight of the Night victory over Elias Garcia at December’s Adelaide card, the flyweight got his wish granted for a quick turnaround. Not only was that wish granted, but he now finds himself supporting Australia’s reigning champion Robert Whittaker alongside his teammates Israel Adesanya and Shane Young.

With uncertainty surrounding the flyweight division, “Don’t Blink” takes the mission seriously that he’s fighting for more than himself. Emboldened by his former TUF coach and mentor Henry Cejudo’s thrilling title defense, Kara-France is more driven than ever to make his weight class synonymous with fireworks. He’ll get a chance to make more of those fireworks against Raulin Paiva at UFC 234.

“I’m cheering for him, he’s a good man,” confirmed champion Cejudo. “The dude went through his bumps and bruises to get to the UFC…he deserves every bit of it.”

Game recognizes game, of course, and Cejudo slyly added “I’ve got my eyes on Kai Kara-France.”

UFC: You got your first UFC win out of the way right out of the gate with a dominant victory. That had to feel extra good?

KF: Yeah, definitely. Going into your UFC debut, you always have those jitters everyone talks about. But I had a practice walkout before anyone was in the stadium, so I got those feelings out early. When I made the walk the second time, it just felt a lot more natural. Once you get past the bright lights and all the people around you, you remember it’s just another cage. I remember before I was about to touch gloves with my opponent, my coach, Eugene Bareman said “this ain’t your first rodeo.” So that gave me a bit more confidence.

I was happy to get the win, happy to showcase my skill set, not just get a quick finish. I wanted to show that I’m durable. I’ve got experience now, so I want to show the whole aspect of my game.

UFC: You're on the same card as your teammate, Israel Adesanya. Does it give you an extra boost to have him around during fight week?

KF: Definitely. The energy Izzy brings is so contagious. He’s one of those guys. If you’re down on energy or having a bad day, just being around him makes you feel so much better. He’ so confident in what he does. It’s definitely motivating having him as a training partner. I look up to him as a role model as well; what he’s done in the sport in such a small amount of time. It’s awesome, especially having Shane Young, our other teammate on the same card us. We’ve got like nine other corner men over here, so it feels like a normal day at our gym, City Kickboxing, and that’s definitely going to play a part on fight night; take the nerves away and help us perform at our best.

UFC: Watching Adesanya’s rise, does it perhaps show a similar blueprint that you can take?

KF: Yeah, definitely. What he’s done in his time--fighting so frequently, being so active—that’s the kind of mentality I want to have in the UFC. I want to be active. I want to keep momentum going. That’s why I asked for this fight so quickly after Adelaide. When they announced they were coming to Melbourne, I just wanted to be a part of it. I went straight back into fight camp.

UFC: Read that you've fought as high as lightweight? How is that possible?

KF: Yeah (laughs). I only weighed in at about 65kgs (143.3 pounds), but the guy I fought was 70kgs (155lbs)—big weight advantage. I took it on a day’s notice as well, and ended up winning by decision. Back when I started in 2009, there wasn’t really lighter weight classes, so I just had to take the fight, otherwise there wasn’t any. So it was sink or swim, and I guess it got me to where I am today; being thrown in the deep end and having to adapt to survive.

UFC: We're all hoping the flyweight division sticks around, but if it doesn't, are you comfortable in your skills in a different division?

KF:  Before I got picked up by the UFC, I was on a five-fight win streak at bantamweight. So if it comes down to it, I feel more than comfortable going up a weight class. Either or. But I’ve got a fight at flyweight. I’ll make the weight. I’ll put on a show. For now, I’m in the flyweight division and looking at guys ahead of me. I always want to put on exciting fights and show why we should be here.

UFC: Cejduo was your coach on The Ultimate Fighter. You obviously had to be excited about his night in Brooklyn. With performances like the two of you put on, does it feel like you’re fighting for more than yourselves?

KF: I jumped off my chair when he caught TJ Dillashaw. I was so happy for him. It was awesome to see him do that in such a devastating fashion. I feel like it was a good stoppage.

I couldn’t be more happy. I have a job and another fight. Every time I fight now, I’m not just trying to win, I’m trying to be exciting, trying to get a finish, trying to educate people as to why flyweights should be in the UFC. We’re not just decision-ers that can’t knock each other out or put on exciting fights.