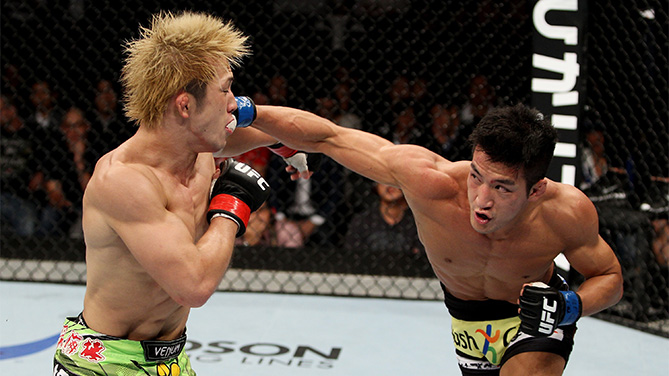 SAITAMA, September 20 – Bantamweights Kyung Ho Kang and Michinori Tanaka thrilled fans at the Saitama Super Arena for three rounds Saturday, with Kang pulling off a razor-thin split decision in UFC Fight Night prelim action that could have easily gone the other way.

Kang stunned Tanaka with a punch in the first exchange to open the fight, and as Tanaka looked to regroup, he got rocked again. In the ensuing scramble that hit the mat, Kang got into the mount position and then took his opponent’s back. A rear naked choke attempt followed, but Tanaka was able to get free and eventually return to his feet, where he sought his own takedown. On the mat, the two reversed positions more than once, Kang taking the back again in the final minute.

Confidently moving forward and catching Tanaka with hard shots, Kang had success as round two opened, only to wind up on the mat, victim of a Tanaka takedown. Kang remained aggressive from the bottom, working on a kimura that allowed him to get into the top position. Tanaka fought loose and back on top, picking up some points with ground strikes before taking Kang’s back for the first time. Tanaka’s forearms were effective as Kang tried to escape, drawing a roar from the crowd with each landed blow.

Tanaka got the fight back to the mat in the second minute of round three, and again, the two traded positions, thrilling fans with the back and forth action. With less than two minutes left on the clock, the combatants stood and traded shots, mixing in more ground action as well, putting on a show that showed all the best aspects of MMA in one 15-minute bout.

All three judges saw it 29-28 for Kanehara, who was originally scheduled to face Urijah Faber before an injury sidelined “The California Kid.”

Kanehara’s first round in the UFC was a good one, as he controlled matters on the feet and the ground, but he lost out on his chance to make it a great round when he let Caceres (10-7, 1 NC) off the hook after hurting him with a right hand with a little over a minute left.

Taking the bout to the mat to begin the second, Kanehara (24-11-5) took Caceres’ back and stayed there, even after the Miami native rose to his feet. After a rear naked choke attempt by Kanehara, the two went back to the canvas, and the Tokyo veteran kept searching for his opponent’s neck. The resilient Caceres was able to make it through the round, but now he needed to make a big comeback in the final stanza.

Caceres had a solid last round thanks to his volume of strikes, but what he needed was a fight-stopping punch or kick, and that just wasn’t there for him, as Kanehara rode out the round and picked up his win.

Tokyo’s Katsunori Kikuno gave the Japanese contingent their first win of the night in featherweight action, submitting Sam Sicilia in the second round.

Sicilia looked like a kid in a candy store as he saw Kikuno coming at him with his hands at his waist, and he fought accordingly, throwing haymakers as he attempted to wrap the night up early. Kikuno seemed to be just as happy though, frequently sporting a grin as he peppered Sicilia’s legs with kicks while avoiding any missiles to the chin.

In the second minute of round two, Kunimoto switched things up and took Sicilia down, and as he took the Spokane product’s back, he sunk in a tight rear naked choke, with the tap out following at the 1:38 mark. 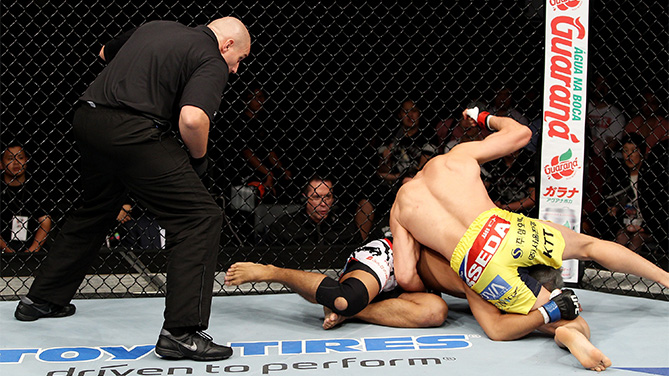 In his first bout since a five-round Fight of the Night against Tarec Saffiedine in January, Seoul, South Korea’s Hyun Gyu Lim had a much shorter night against Takenori Sato, winning the welterweight bout via first-round TKO.

Taking his time to get started, Lim (13-4-1) eluded Sato’s attacks, but when the Tokyo native shot in for a takedown, “The Ace” lowered the boom, dropping Sato (17-10-7) with a series of elbows and then finishing the fight with ground strikes. Referee Leon Roberts halted the bout 78 seconds into the opening frame. 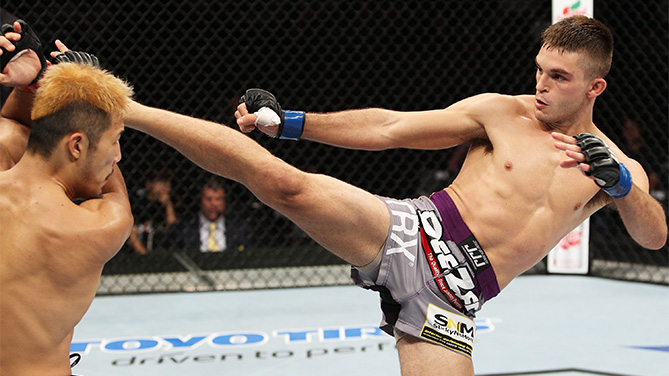 Lightweight newcomer Johnny Case made the most of his first trip to Japan, picking up a victory in his UFC debut by finishing Tokyo’s Kazuki Tokudome in the second round.

“It usually takes a round for me to get the cobwebs out and get into a groove,” Iowa native Case said.

Tokudome had to work for it, but 90 seconds into the fight he got the bout to the mat. With Tokudome controlling position, Case had to work just as hard to get loose, but with under two minutes remaining he did, getting back to his feet to try and get his striking game in gear.

An inadvertent low kick by Tokudome halted Case’s momentum early in the second, but when the bout resumed, Case (19-4) put his foot on the gas and finished matters, using a right hand to knock Tokudome (12-6-1) down and a guillotine choke to end it, with referee Steve Pereval stepping in at the 2:34 mark. 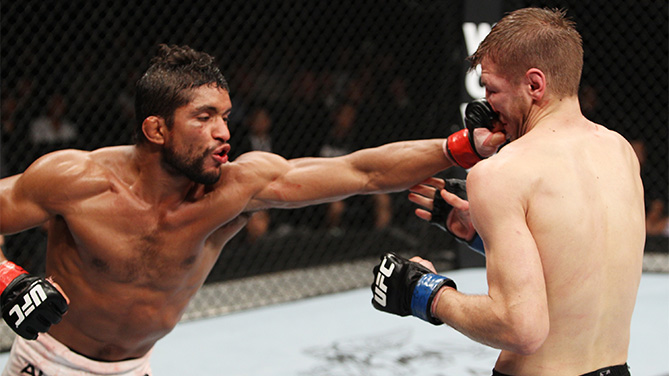 Featherweights Maximo Blanco and Dan Hooker got the card off to an action-packed start, with Blanco holding off a furious late fight effort from his opponent to win a close unanimous decision.

Despite giving up plenty of height to his opponent, Blanco had little difficulty closing the distance and scoring with his strikes as the fight opened, with the lead uppercut being a particularly effective weapon. Surprisingly, Blanco would look to take Hooker down immediately after ripping off flush combinations instead of following up with more punches, taking away the advantage he was enjoying.

Hooker continued to have issues blocking the uppercut in round two, but he stayed busy enough to keep Blanco honest. The New Zealander’s ability to take those hard shots and keep coming was paying off as Blanco tired, but a nasty cut over the right eye wasn’t helping his cause any. After a check from the doctor in the final minute, Hooker showed a sense of urgency in going after his foe, but he was unable to get anything done before the horn.

The persistence of “The Hangman” worked in his favor more than ever in the final round, as he rocked Blanco with his strikes and kept the pressure on, further testing the Tokyo-based Venezuelan’s gas tank. Blanco remained calm though, holding off Hooker and losing the round, but winning the fight.