Kanehara's success has come because of his passion for fighting 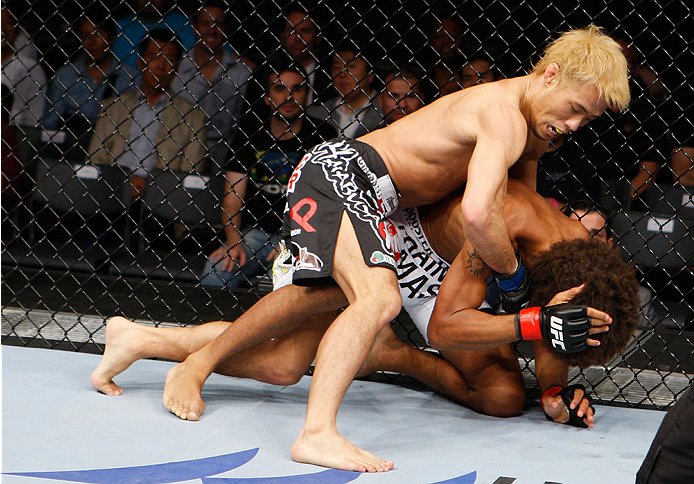 Before Forrest Griffin and Stephan Bonnar kicked off the mixed martial arts explosion in 2005, before Conor McGregor, Ronda Rousey and Jon Jones introduced the world to a new generation of fighter, there was Masanori Kanehara, plugging away on the Japanese scene in 2003 as a 21-year-old who wasn’t thinking of fighting in Las Vegas in January of 2016.

At least not yet.

“Fighting was pure fun,” Kanehara said of those days. “That's all that mattered.”

So while fighting has become big business and fighters are more careful in how they navigate the waters early in their career in order to get to the big show, veterans like Kanehara didn’t ask who they were fighting; they just asked where and when.

And when you’re competing for the love of the game like the Tokyo native and his peers did, those early records can often look less than attractive. In Kanehara’s case, he made it through his first eight fights with a 2-3-3 record. Today, that might be the signal for a young man or woman to find another line of work. Kanehara was undaunted by what showed up on his won-loss slate.

“I didn't have a background in any combat sport and I didn't think I was genetically talented, so I just believed in myself that it would be all good if I became a champion in the end, no matter how many times I lost.”

That attitude spurred him on to go 7-0-1 in his next eight bouts, and from there, he would win more than he lost, beating the likes of Chan Sung Jung, Michihiro Omigawa and “Kid” Yamamoto as he built a reputation in Japan as one of the country’s best. Now he’s in the UFC, and after a win over Alex Caceres and a split decision loss to Rani Yahya, Kanehara will face the returning Michael McDonald in an intriguing UFC 195 bout in Las Vegas.

For McDonald, it’s a chance to put his name back in the title picture after two years away from the sport due to injury. For Kanehara, he feels the same way about this fight as he did in those early days.

“Pleasure, anticipation and excitement of being able to fight world's best,” the 33-year-old said when asked how he keeps things fresh for himself after more than 12 years as a pro. As for the version of McDonald he will be facing after “Mayday” spent two years on the sidelines, Kanehara said, “I’m assuming he would be the same tough dude we all know him as.”

We can assume the same thing of Kanehara, who has made it clear that on Saturday, McDonald will have to not just fight him, but face his samurai spirit as well.