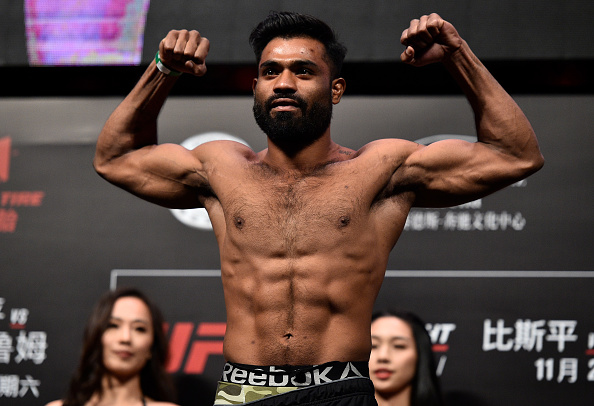 Bharat Kandare of India poses on the scale during the UFC Fight Night weigh-in on November 24, 2017 in Shanghai, China. (Photo by Brandon Magnus/Zuffa LLC via Getty Images)" align="center" />
There’s no question that fight fans in India were watching intently in September as Arjan Bhullar, the first fighter of Indian descent to compete in the UFC, made his Octagon debut with a win over Luis Henrique. One of those fans was Bharat Kandare.

“I congratulate Arjan on his UFC debut,” he said. “He has worked hard to get into the UFC like any other fighter. It’s certainly a proud moment for us to have a fighter of Indian descent in the premier league of MMA.”

On Saturday, Kandare, also a pro fighter from Mumbai with a 5-2 record, makes history of his own as he becomes the first native of India to fight in the UFC. And when he faces fellow debutant Song Yadong in Shanghai, it may be even more important for a sport that’s still growing in India.

“UFC has a niche following in India,” Kandare said. “With an Indian fighting in the UFC, the viewership will only grow, so it’s beneficial for the UFC and the youngsters of India. Youngsters who train in MMA can now look at this as a career option. And the younger generation that look at smoking and drinking will divert their aggression towards boxing and MMA and possibly do good for themselves.”
RELATED: Watch Shanghai On FIGHT PASS exclusively! | Free Fight - Bisping vs Le | Gastelum Looking For A Finish

Being the representative of a nation with that much on the line is a lot to deal with when there’s someone across the Octagon trying to punch you in the face, but fighters like the 30-year-old Kandare are born with the desire and courage to handle it. So after he felt like his time in wrestling had come to an end, the Bhagur native moved on to fighting.

“My background is in wrestling,” he said. “However, due to politics in sports, my career didn’t progress in wrestling. I pursued boxing and eventually learned about MMA. Looking at my career, I hope other wrestlers take up MMA, as it’s the fastest growing sport.”

It sounds like a simple transition, but it’s not especially when you’re one of a handful of hopefuls competing in a sport that is far removed from the more popular ones at home. Add in those quizzical looks and comments from family, and that’s two strikes before you even step up to the plate.

“My family supports me,” Kandare said. “They used to not support me as they felt this doesn’t have a future. But now that’s put to rest.”

That’s a good thing. But if they need a reminder that he’s on the right track, they’ll just need to look when Kandare makes his walk in an arena filled with fans while countless others around the world watch the event. That’s going to be a moment he’ll never forget, but he insists it won’t deter him from the job at hand.

“I am obviously very happy,” he said of his UFC debut. “But on fight night I will have to keep my emotions aside and focus on winning my first fight in the UFC.”

And that focus won’t change. It’s what got him here in the first place.

“I am very persistent in life,” Kandare said. “I didn’t have much as a kid from a small town; I had to earn it all by myself. I used to do a day job and train at night. This work ethic and hard work reflects in my ‘never say die’ attitude inside the cage.”