Kamuela Kirk Is Ready For His Next Assignment

After winning his Octagon debut, Kamuela Kirk is looking for his first UFC finish at UFC Fight Night: Santos vs Ankalaev
By Miguel Navarro III, on Twitter: @migsnavarro15 • Mar. 11, 2022

The UFC’s featherweight division houses some of the most elite fighters to compete inside the Octagon.

For newcomers trying to establish their name, making a mark in such a division can be a daunting task. Featherweight Kamuela Kirk, on the other hand, welcomes the challenge and pressure that comes with the moment.

“I feel pressure going into every fight, but it’s a good kind of pressure,” he said. “I think it’s a pressure that brings the best out of me. Some people ask me, ‘You’ve been fighting for a while, do you still get nervous?’ Yeah, I get nervous before every fight. But it’s good. Those nerves keep me sharp. They keep me on point. They keep me focused. I think the moment you stop feeling a little bit of pressure, when you stop feeling nerves, you maybe don’t care as much as you used to. 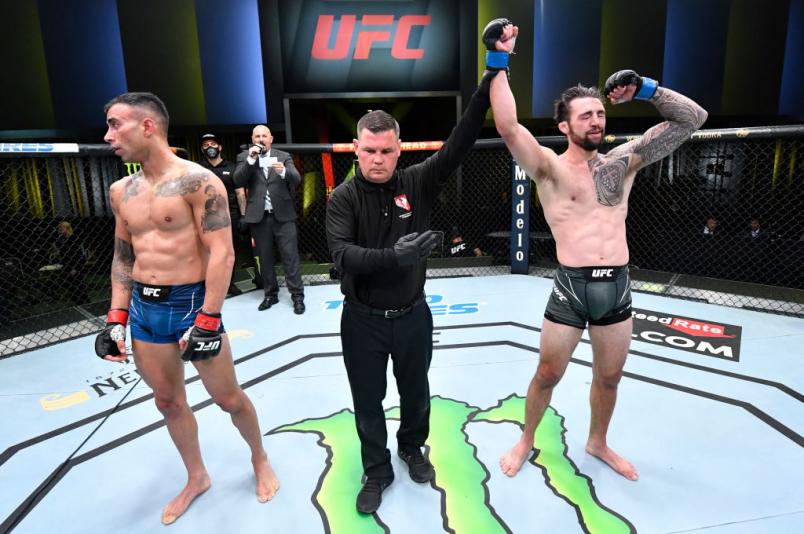 Kamuela Kirk reacts after his victory over Makwan Amirkhani of Finland in a featherweight fight during the UFC Fight Night event at UFC APEX on June 05, 2021 in Las Vegas, Nevada. (Photo by Jeff Bottari/Zuffa LLC)

On a week’s notice, Kamuela Kirk would accept a fight against veteran Makwan Amirkhani for his UFC debut last June. A surprise like this isn’t anything new for Kirk, as three weeks prior he’d just won a fight in LFA on 12 days’ notice.

You could tell Kirk wasn’t letting those first UFC fight jitters get to him in his bout with Amirkhani. Calm and composed, Kirk would outwork his foe to win by unanimous decision. A fighter’s first win in the UFC is typically a thing to celebrate. While Kirk appreciated the moment, it didn’t set in until much later what he had accomplished. In fact, the first thing that was on his mind was what he didn’t do right in his fight Amirkhani.

“I would say the only disappointing part about my last fight was that I didn’t get the finish. If you look at every single one of my other victories, they’re all by way of finish. I have almost as many TKO finishes as I do submissions. That didn’t happen in my UFC debut. That would be my only regret, not finishing the fight.”

“What was cool, too, was that it happened so fast. I didn’t really have a whole lot of time to process everything that was going on. It wasn’t a week or so until after I made my debut where I really looked back and thought, ‘Man, that all just happened. That’s insane.’”

Kirk’s win against Amirkhani wasn’t the first time the Hawaiian fighter had appeared in the UFC APEX. He cornered fellow UFC fighter Luis Saldana for a fight and would compete on Dana White’s Contender Series in 2019. Kirk wouldn’t find the result he was looking for on the UFC President’s show, losing by decision to Billy Quarantillo, who would be awarded a UFC contract for his win. 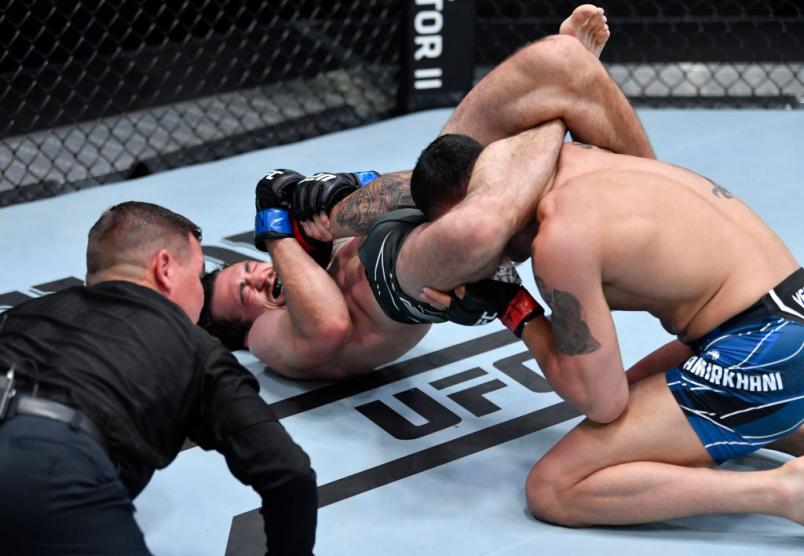 Kamuela Kirk attempts to secure an arm bar against Makwan Amirkhani of Finland in a featherweight fight during the UFC Fight Night event at UFC APEX on June 05, 2021 in Las Vegas, Nevada. (Photo by Jeff Bottari/Zuffa LLC)

While it was heartbreaking to not get the win and miss out on a UFC contract, Kirk knew deep down that maybe it wasn’t his time yet.

“I think, ultimately, at that moment, even though I thought that I was ready to be in the UFC, there were some things outside of fighting, like the way I’d run my camps, the way my weight cuts would go, the way I would reload once I’d step off the scale, those were things that we hadn’t quite dialed in that we’re so much better at now. I would say that’s the biggest difference between where I was at three years ago compared to now, is that we have everything dialed in. It just comes with time and experience.”

Kirk couldn’t be more right. Fight experience is something you just can’t chase. For someone like Kirk, who is only 27 years old, he truly has all the time in the world. He may not have realized it then but cornering Saldana and competing on DWCS was the exact experience he needed.

At this point, Kirk is comfortable being in the UFC spotlight now. He knows he earned his spot on the roster; now it’s time to let his division know that his time is now.

“The fan in me was like, ‘This is so cool to be here. They’re handing me this Venum bag full of UFC gear, this is amazing!’ But then the fighter and hard worker in me said, ‘No, you deserve to be here. You worked your ass off to get here.’ I feel like I belong. I feel like I’m at home.” 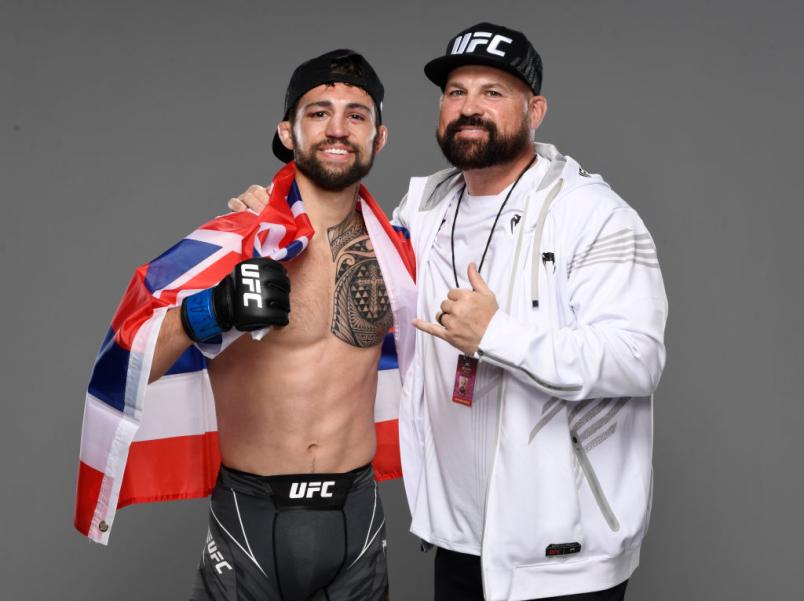 Kamuela Kirk poses for a portrait after his victory during the UFC Fight Night event at UFC APEX on June 05, 2021 in Las Vegas, Nevada. (Photo by Todd Lussier/Zuffa LLC)

After getting his first UFC win out of the way, Kirk is finally feeling settled. The goal for the Hawaiian now is to learn and keep climbing the rankings. For his next fight, Kirk will meet fellow Damon Jackson this Saturday at UFC Vegas 50.

Kirk believes he’ll know what to expect from his opponent on fight-night. He anticipates Jackson living up to his nickname of “The Leech” by grappling and trying get the fight to the ground. With six submission wins of his own, Kirk is ready for wherever the fight goes.