Welterweight Champ Looks To Fulfill His Appetite For Competition
By Zac Pacleb, on Twitter: @ZacPacleb • Apr. 22, 2021

There’s something to be said of a fighter whose fights all look eerily similar to one another. It’s a sign of complete control of what is supposed to be a chaotic experience, something only the greatest to enter the Octagon can achieve.

Through 13 UFC fights, including four title fights, welterweight champion Kamaru Usman has made a habit of imposing his will on the 170-pound division, grinding and grappling and beating up the best the division has to offer. Along the way, Usman showed a particular fondness for “breaking his opponent,” a phrase occasionally tossed around and fairly understood in the fight game. To hear Usman describe it, though, is to hear a person who has made a habit of this kind of soul-crushing, which he intends to do when he defends his title against Jorge Masvidal for a second time at UFC 261.

“To be able to go the distance and you break him, you take his best shot, he takes your best shot, but he can’t take it – you break him,” Usman said. “You break his will. It withers, and you feel it break. There’s a moment to where you just know. Forever in that guy’s life, he will never forget that moment no matter what he does, which is why, in most cases, we don’t remember all the things we win. We don’t remember all the people we compete against and beat, but we remember each and every one that we lost to.”

As it is well-documented, Usman and Masvidal went to battle when the latter stepped in on six days’ notice at UFC 251 on Fight Island last July. “The Nigerian Nightmare” dominated, never really encountering adversity en route to a unanimous decision victory, but something was missing from the performance from Usman’s perspective.

It’s why, after knocking out Gilbert Burns at UFC 258, Usman had Masvidal’s name on the tip of his tongue. With ample time for both men to prepare, the champ got his wish and another chance to impose his will on “Gamebred.”

“It doesn’t have to be a knockout or a submission – it doesn’t matter,” Usman said. “It could be a decision as long as I fulfill that appetite of competition, as long as I go in there and compete, take his best shot, take everything he has to offer and give him all I have to offer and know that I broke his will. That’s my high. That’s what I want, is taking souls.”

For the most part, Usman hasn’t feigned any concern of Masvidal’s skill set. Masvidal’s only appearance in 2020 came in that title shot against Usman. His basic takeaway from their first fight was that, if given a proper amount of time to prepare for the champ, he’d do to Usman what he did to Darren Till, Ben Askren and Nate Diaz in his breakout 2019 campaign.

Naturally, Usman thinks that sentiment is overblown and happily welcomes any adjustments from the challenger.

To do what Usman is doing at 170 pounds begs comparison to other welterweight stalwarts. He took out Tyron Woodley, then considered one of the greatest to do it in the division, to take the title at UFC 235, and his 13-fight winning streak equals that of Georges St-Pierre, one of the greatest champions in UFC history.

Needless to say, the Usman-versus-GSP conversation is starting to bubble up around the current champion. He aired his hypothetical wish to fight “Rush” if the two were in their primes, a fascinating matchup stylistically.

But, with the comparison comes the potential threat to lessen both athletes’ respective legacies independent of hypotheticals. Usman, to his credit, doesn’t really entertain the conversation but instead hopes fans are able to celebrate both for what they have given the sport.

“He was the man while I was looking at the sport and looking to get into the sport,” Usman said. “So, as far as comparing legacies, I don’t because I wasn’t Georges St-Pierre. I wasn’t in the sport while he was competing, so I really don’t. I’m living in my moment and seeing what I’m doing. People continue to try to compare and put us together. It’s really not a comparison. Georges was great with the opposition that he was presented with, and we all see now what I’m doing with the opposition that I’m presented with, so I think we’re both great in our own light.” 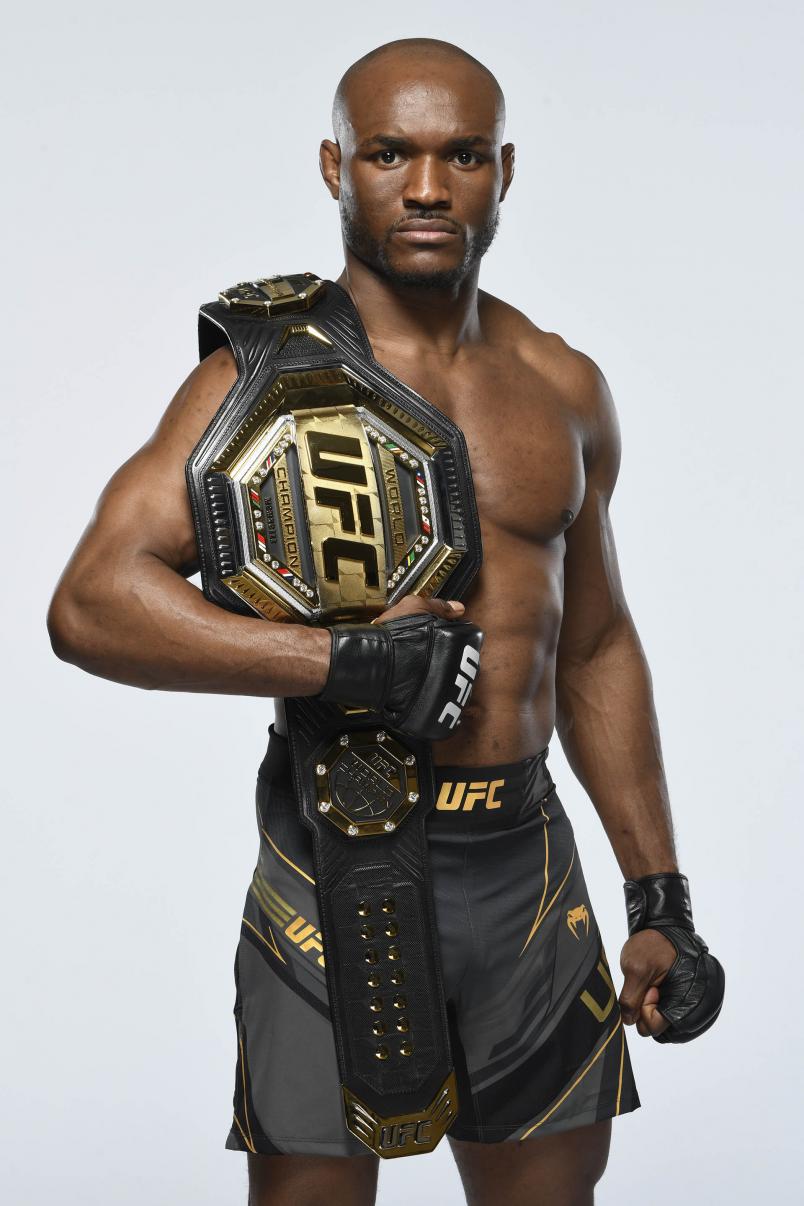 The inevitability of Usman’s dominance is a large part of his legacy, as is his love for competition. It’s what keeps his engine running and permeates his approach to every aspect of the sport.

When it comes to this rematch – the first of his career – Usman is, in part, competing with his own performance at UFC 251. He expects better than the shutout decision he delivered back then. Voluntarily throwing himself into the fire produced the champion at the top of the division right now, and by continuing to do exactly that, he hopes to keep producing what fans have come to expect. For Usman, though, the results are not as inevitable as it seems to those on the outside. The goals, intentions and the “why” of Usman’s career remain the same, though.

“I’m just blessed, and I’m grateful to have the opportunity and the platform to be able to surprise myself in that way.”