Kamaru Usman Has Learned How To Hone His Energy

In Preparation For Likely The Most Challenging Title Defense Of His Career, Kamaru Usman Breaks Down The Changes He's Made To Evolve As A Champion
By Zac Pacleb, on Twitter @ZacPacleb • Nov. 1, 2021

The adjective most-aptly associated with Kamaru Usman in the Octagon is: dominant. Sure, others work as well: elite, superior, authoritative, etc., but dominance is his M.O., and he has maintained that despite a bevy of dangerous contenders chasing his belt.

However, what is perhaps underrated is Usman’s resolve. Although he hasn’t tasted defeat in the UFC, his time as champion hasn’t been outright flawless. In each of his title defenses, he has encountered adversity from a multitude of directions, but every time, he prevailed with the belt still wrapped around his waist.

If it seems like he is at ease in these tense moments, it’s because he is fully prepared for them, which will be the case once again when he fights Colby Covington at UFC 268.

“I want to make sure that I replicate, as much as possible, the feeling that I’m going to feel in there because I don’t want it to feel foreign,” Usman told UFC.com when we visited the champion in Denver, Colorado. “Most cases, when people are hurt, when people are definitely injured or people lose fights is because things that are happening to them out there are foreign, and they don’t know how to deal with it, so I want to make sure that I’m putting myself in that position as much as possible, so when I get out there, it’s second nature. I’ve been there before."

Although Usman seems like the same fighter, that time spent in his own head and sharpening his skills is paying off. His striking is sharper than ever, and he hasn’t strayed far from the suffocating, pressure-forward wrestling style that brought him up the welterweight ladder.

In his last fight against Masvidal at UFC 261, he had literally been in that matchup before and got the job done in stunning fashion. A huge right hand to Masvidal’s jaw put “Gamebred” to sleep, putting to bed any doubt about Usman’s first, admittedly underwhelming, victory over him on UFC Fight Island. 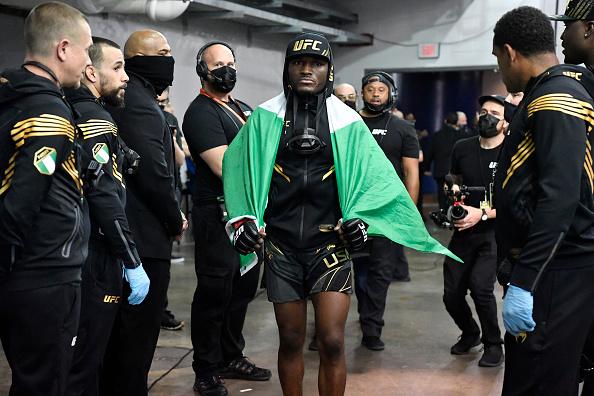 Kamaru Usman of Nigeria prepares to walkout from backstage during the UFC 261 event at VyStar Veterans Memorial Arena on April 24, 2021 in Jacksonville, Florida. (Photo by Mike Roach/Zuffa LLC)

That first fight was Usman’s first camp with Trevor Wittman in Colorado, a move made when Usman originally signed to fight training partner Gilbert Burns. As Usman prepares with Wittman for a fourth fight together, “The Nigerian Nightmare” showers his new coach with praise. The atmosphere is dramatically different than most gyms. Instead of a whole squadron of fighters training together with a coach floating around offering advice, Usman and Wittman work together one-on-one more often than not, which gives Usman a chance to really zone in on himself.

It’s perfect timing for the rematch against Covington. Their first fight at UFC 245 was a late entry to the Fight of the Year conversation, and the pair are a picture-perfect matchup for one another. Both tout excellent wrestling pedigrees, yet they decided to essentially have a five-round kickboxing match.

Covington and Usman went shot-for-shot, keeping a pace that made other fighters wilt when they faced either man, and as the fight wore on into the championship rounds, Usman asserted himself more and more before getting the stoppage in the final frame. According to Usman, part of the competitiveness of the fight was borne out of the bad blood between the two heading into the matchup, which led to him straying from the game plan a little bit. 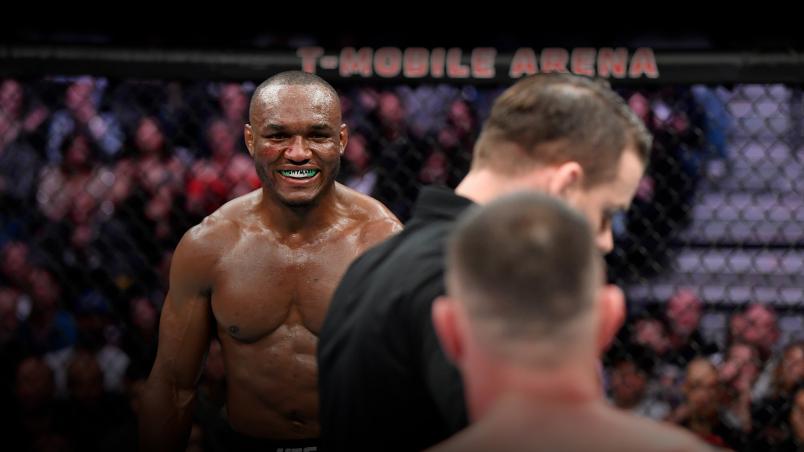 Kamaru Usman of Nigeria stares down Colby Covington in their UFC welterweight championship bout during the UFC 245 event at T-Mobile Arena on December 14, 2019 in Las Vegas, Nevada. (Photo by Jeff Bottari/Zuffa LLC)

“I was much better than that,” Usman said. “In the third round, you see flashes of it. The first round, you see his landing percentage and punch count was extremely up just because I was having fun. I just wanted to throw punches. Then, when I got back to being tactical, completely changed. That’s it. I’m just learning how to mentally be in control of what’s going on, and I take care of business.”

The fight was undoubtedly the closest call of Usman’s title reign, save for a moment early in his fight against Burns, and so Usman does hold a certain level of approval and appreciation for Covington as a peer.

Even amongst his fellow fighters, Usman has a particularly special love for the arena of competition, and when he talks about a rematch with Covington, a sincere smile comes across face. Part of it is a chance to fight someone at a high level who he knows can almost match his own, and, of course, part of it is still that animosity simmering underneath the surface.

“There has to be a level of respect there,” Usman said. “I know he has it, but just his whole façade, he won’t let you see it. He definitely has it, and I have it for him, too. I smile because I’m in a place now in my life, and I’m in a place in this sport, to where I understand competition. I understand what it’s about, and I love it. I love it. I know that, one day, this is going to be gone, and I have to look back on it and be OK with how I handled it, and so I love it. I don’t like him as a person per se, but I respect him, as an athlete. Absolutely.”

After acing the test in his first rematch, Usman headlines one of the more stacked cards of the year at UFC 268 in Madison Square Garden. The lights will perhaps be brighter than ever, and it could be a special night for his camp. Before cornering Usman, Wittman will corner Justin Gaethje and Rose Namajunas in the preceding two fights, so a chance to go 3-and-0 on the night is right there.

However, as much as Usman loves the dynamic between the elite trio, he’ll have his mind set on taking Covington out for a second time. Before he fought Masvidal, Usman talked about quenching his competitive thirst, something he felt he didn’t do in their first matchup. Against Covington, Usman already has a finish under his belt, but there’s a sense that he wants to show everyone and himself how much he has improved since that December 2019 bout. As he has said several times, he feels like he’s starting to lap the contenders chasing his throne, and he can assert that point stronger than ever on November 6.

“I’m improving in the way to where, now, I’m focusing on myself,” Usman said. “I know that I have the athletic ability. I know that I have the mental capabilities, so now, fine-tuning and sharpening all of it and putting it all together for one night, and no one does that better than me.”