Kajan Johnson: The Struggle and The Glory

"I'm still here and it's all because of perseverance. I won't be stopped. I refuse." - Kajan Johnson 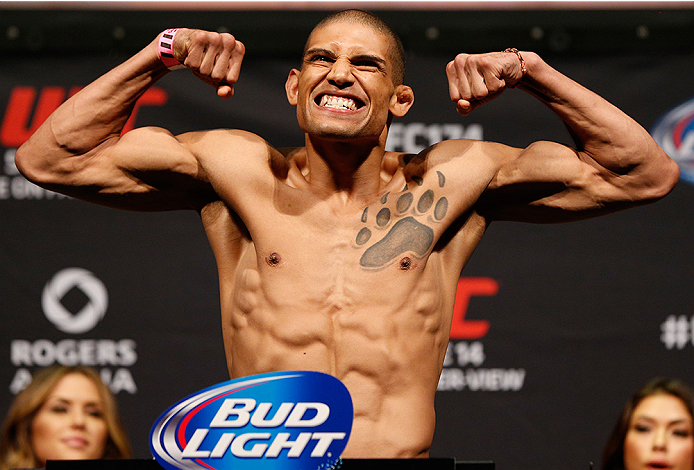 Note to the UFC PR department: Kajan Johnson is ready for you.

“This is what I was born for,” said the lightweight newcomer, who makes his UFC debut Saturday night in Vancouver against Tae Hyun Bang. “This is my destiny. There are not a lot of people that have the package that I can put forth or that can grind and hustle and do all these other little things that a lot of fighters neglect - social media, marketing yourself, interviews, etc. I will do all of that because I remember what it was like to be starving and to be working my ass off and to have absolutely nobody even caring or wanting to interview me. So I'll do all the interviews; give them all to me. I want as many people to know me as possible.”

He means it too, and if you didn’t get a hint at how excited and ambitious Johnson is, a dose of him on the recent Ultimate Fighter: Nations series should have introduced you to the charms of the 30-year-old veteran, who made it to the semifinals of the show before getting knocked out in the semifinals by his Team Canada squadmate and eventual season winner Chad Laprise. In the process, Johnson got his jaw broken, which may not have been the worst thing to happen in his career.

What was worse was fighting just to fight in the early days of a career he started when he was 17, and knowing that by the time he realized that he was good, his record was a warning label to prospective promoters and fighters. He was too good to risk your hot prospect against, but his record wasn’t good enough to get him to the big show. So while the UFC rolled into Canada with home country icon Georges St-Pierre in April of 2008, Johnson had a 12-9 record and the phone wasn’t ringing.

“Unfortunately, I started fighting before amateur existed, so a lot of my early fights should have been classified as amateur fights,” he said. “A lot of them didn't have knees or elbows, a bunch of them were two five-minute rounds instead of three five-minute rounds, some were three three-minute rounds, and there were no real rules set in place at that time. I lost a lot of these fights, but really, if you just scrap my record before 2004, I was 14-2-1. I was just hoping that they would have realized what I was doing recently instead of just looking at the overall picture. I'm not like a lot of people; I didn't learn by training, I learned by fighting. The whole time I was getting grades and unfortunately those grades stuck around, which is cool because it shows that I had all these fights and all this experience, but it made my road a lot longer to get into the big show.”

The big show wouldn’t beckon for another six years, a period in which he went 7-1-1 with wins over solid competition like Zach Light, Ryan Healy, and Richie Whitson. But those last two victories – his most recent pre-TUF fights – came a year apart in 2010 and 2011. And in spite of staying in the win column, those two years, and the two to follow, contained the British Columbia native’s darkest hours.

“In 2010, I was dealing with shoulder injuries the whole year, and then I wound up getting a fight finally,” he said. “I trained for that fight, won that fight, I thought I'd have another fight right away, went right back into the gym and I broke my orbital. I had two surgeries on that and that put me out for another year before I could start training again. That brought me to 2013 and then I spent the whole year trying to get a fight, and nobody would fight me. That was probably the lowest that I've ever been. I got into a really, really dark place, and it was extremely difficult for me to see the light.”

That light came in the form of The Ultimate Fighter, and on the Nations edition, Johnson submitted Brendan O’Reilly in the quarterfinal round before the loss to Laprise. And yes, the loss was devastating and the broken jaw even worse, but at least he knew that there was a light at the end of the tunnel. That wasn’t the case in 2012, when his family repeatedly asked him to quit the sport and come home from his training camp in Montreal.

“My family begged me to quit multiple times,” he said. “My mom doesn't like seeing me get injured, get hurt, or go through periods of time when I was almost starving and didn't really have money to eat because I couldn't get a job (in Montreal) because I don't speak French and I'm living out here and training. It's been difficult for my family for sure, and they asked me to give it up and told me that it was time to move on. But I wasn't ready.”

And on Saturday night, he gets to show them and the world just what he was fighting for all those years.

“I'm still here and it's all because of perseverance,” said Johnson. “I won't be stopped. I refuse. So when my jaw broke, I didn't want this to happen again and I didn't think it would happen again. I thought that the other facial fractures that I dealt with were enough. But I wasn't ready to lay down. It's not going to stop me. I'm going to keep moving forward. Even if my face breaks again, I'm not stopping.”

That’s the difference between fighters and the rest of us. For someone like Kajan Johnson, all that matters is getting to that finish line. Everything else is just part of the story you get to tell your grandkids one day, complete with the scars of the fight that few can claim.

“I'm very proud of what I've been able to accomplish and the road that I've had,” said Johnson. “I wouldn't change it for the world because it's really made me the man I am today. A lot of the lessons I've learned from fighting I take into life and it's something that a lot of people don't do quite enough. Any lesson that you learn in fighting, if you just apply it to life, it will work exactly the same way. So I've learned a lot of these lessons and it's really, really shaped the human being that I've become today. There's no way that I would ever take it back. It happened for a reason, and I'm about to prove that reason to the world.”