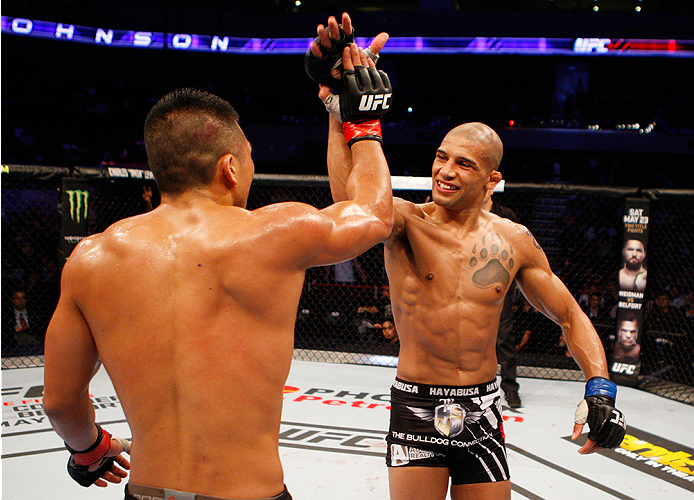 Despite being nicknamed “Ragin,” Kajan Johnson is one of the most soft-spoken and thoughtful prizefighters in combat sports today, and maybe that’s because he doesn’t consider himself as someone fighting for a prize in mixed martial arts, but for something more, something bigger than bonuses or championship belts.

It’s the loftiest of lofty goals, but confidence is high for the 31-year-old these days, as a rocky road to the Octagon, and even in his early UFC run, has led to a place of peace as he approaches his Saturday bout in Japan against Naoyuki Kotani. Not contentment, but peace, a place where he finally feels settled among the best lightweights in the world.

“Definitely,” he said. “It feels like my style is finally solidifying and becoming part of me, and I’m just continuing to evolve and grow as a martial artist, and everything good will continue to come to me.”

That may not have been the case before his last bout against Zhang Lipeng in May. Fighting halfway around the world in Manila, the British Columbia native had lost two consecutive bouts in the lead up to the match, getting knocked out by Chad Laprise in the semifinals of The Ultimate Fighter Nations, and then suffering the same fate against Tae Hyun Bang in his UFC debut. The bout with Bang earned the pair Fight of the Night honors, and Johnson’s aggressive and crowd-pleasing attack would appear to be the best form of job security, but if he lost to Zhang, an 0-2 start to his UFC career wouldn’t have been a good thing.

So the question has to be, how do you put all those outside worries aside and focus simply on the art of defending yourself against someone trying to punch you in the face and then defeating him?

“You don’t, really,” Johnson laughs before explaining how he dealt with all the questions in his head before he defeated Zhang via unanimous decision and earned his first UFC victory.

“I don’t see it as putting it to the side. Any time that you try to force away a negative thought, it becomes more powerful. It’s the same thing as saying ‘don’t think about pink elephants.’ Immediately you think about pink elephants. (Laughs) So if you try not to be nervous, you become more and more nervous. It’s just accepting what is, it’s accepting the negative emotions that you’re feeling, and knowing that just because they’re there, doesn’t mean that they have power over you. I have confidence in my spirit and in who I am as a human being, and those negative thoughts make up a portion of who I am, but they are not the entirety of me. So it’s welcoming the nerves, welcoming the doubt, welcoming every single negative emotion that you could possibly feel, and knowing that it has no power over you. That’s the secret.”

How long does it takes to pick up such knowledge?

“It took me 26 fights,” Johnson, 20-12-1 as a pro, laughs. And while it’s obvious that he’s at ease heading into the Kotani bout, he looked the same way against Zhang, as he fought a disciplined bout in which he showed off the experience he’s earned over the years as well as a new approach to the sport that is serving him well.

“I felt really at home,” he said. “I felt at peace and in the moment, and I had a great deal of belief behind my new system and in myself. I felt free in that fight.”

And no pink elephants to be found. This time around, the stress level is down, but Johnson is just as hungry to win, if not more so.

“I feel like I’m under less pressure,” he said. “I changed everything for my last fight – I changed the way that I fought, and I grew so much in such a short period of time that even I wasn’t sure if I was on the right path. So there was the pressure of possibly losing two in a row, the pressure of coming back from back-to-back knockout losses, so if I got a third knockout loss, that would be the end of my career, and then the style change as well. So it was a lot to have to deal with, all at the same time, but now it feels much easier, with much less stress, so I can just continue to evolve and grow.”