Ahead Of His First Title Shot At UFC 277, Kai Kara-France Is Brimming With Confidence And Fire
By Zac Pacleb, on Twitter @ZacPacleb • Jul. 27, 2022

Kai Kara-France finally got the call for which he worked his whole life: a shot at UFC gold. The moment was bittersweet, however, as he was preparing to head home to Napier for a funeral.  His uncle, from whom Kai got his full middle name “Kaiwhere,” passed away a few days prior to his manager calling him with the news of the title fight. Kara-France immediately accepted, but first, he needed to go spend time with his family before he started a training camp in earnest.

Kara-France then flew to Napier in Hawke’s Bay for his uncle’s tangi, a traditional Māori funeral. He and his other family members carried his mother’s oldest brother to the cemetery while “a few hundred” family members performed the haka. As his uncle’s namesake, Kara-France stood at the head of his uncle’s casket and processed the magnitude of it all while also understanding the task coming in 10 weeks’ time at UFC 277: Peña vs Nunes 2.

“It was a powerful moment and just brought me back to when I’m walking out to a fight,” Kara-France told UFC.com. “It was the same kind of energy to where you’re just being in the moment, and it was kind of surreal for me to be there at that point in time with my uncle, and knowing what I’m about to go and do and fight for a world title.

“Just having a moment saying, ‘When I win this world title, I’ll come back home and celebrate and bring a world title back to you.’” 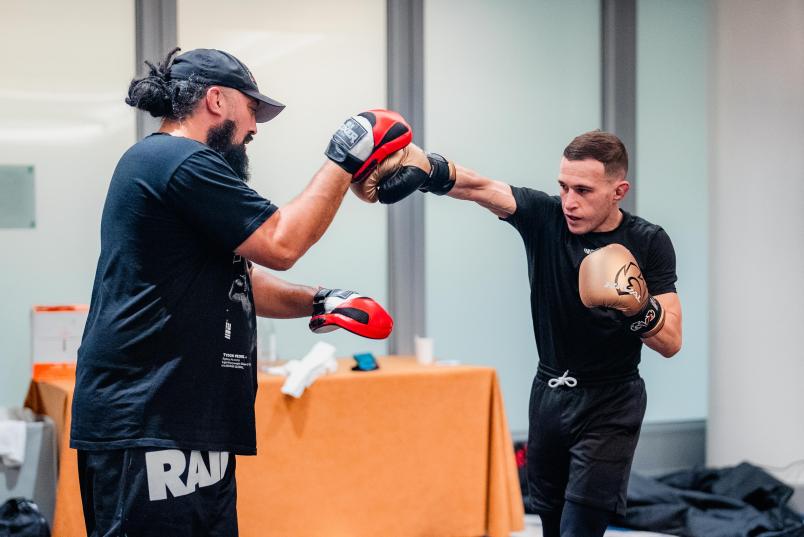 With that fuel added to his fire, Kara-France began training for his first five-round fight with his team at City Kickboxing in Auckland. He said the time with his family helped ground him and put him in the “right headspace” to deal with the day-to-day grind of a championship-level fight camp.

It’s easy to see that Kara-France reached another level as of late. In his last three fights, he picked up his first two UFC finishes over Rogério Bontorin and Cody Garbrandt (earning a performance bonus on each occasion), as well as a victory over the previously unbeaten Askar Askarov.

The results are all the more impressive considering it as a response the rough patch that included two losses out of three fights, including a decision loss to this weekend’s opponent, Brandon Moreno. In hindsight, though, it steeled the 29-year-old, who comes into fight week vibrating with confidence.

“This journey I’ve taken in mixed martial arts, it’s not been a clear path,” Kara-France said. “It does get cloudy. You take losses and minor speed bumps, but the thing is, I keep turning up. I turned those losses into learning curves, and we’ve picked ourselves back up. Here we are now in the prime of my career on a three-fight win streak taking out guys. Everyone overlooked me. They just said, ‘Oh, they’re just going to run through Kai or get the easy win.’ I kept them doubting, and I kept them always calling me the underdog. That’s what I do. I’m looking to get the upset come Saturday night.” 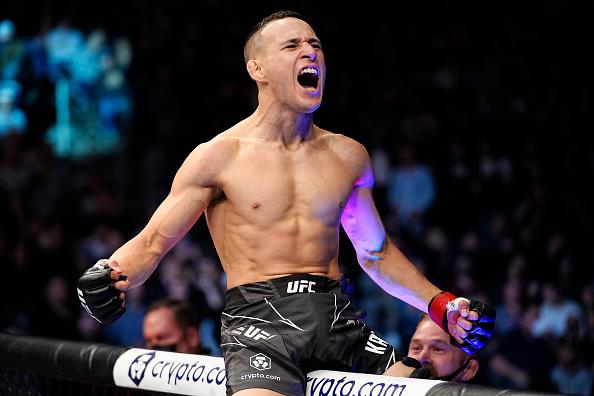 Kai Kara-France of New Zealand celebrates his victory over Cody Garbrandt in their flyweight bout during the UFC 269 on December 11, 2021 in Las Vegas, Nevada. (Photo by Jeff Bottari/Zuffa LLC)

The results aren’t the only telling sign of Kara-France’s evolution. He appears to carry himself with a different aura that is apparent when comparing interviews of the Kiwi at the start of his UFC journey. When probed about the shift in self-assuredness, he brought up the fact that he is a husband and father now - his wife Chardae gave birth to his son Cobi in 2021 – and also considered the growth that comes along with more experience.

Regardless of the contributing factors, “Don’t Blink” heads into his rematch with Moreno feeling like everything is locked into the right places for him to succeed.

“Where I’m at in my life, I’ve just got everything sorted where everything is prioritized,” Kara-France said. “If I’m not at home soaking up all the family time, I’m in the gym trying to get better, so (I’m) just in a different stage. I’m just focused. If Brandon is going off that last fight saying he can do it again, it’s probably the worst thing he can do, thinking it’s the same fighter, because it’s not. If this turns into a dogfight like it did in that third round of the last fight, I’m ready to take it there right from the get-go. If we want to go there, I’ll point down, and I’ll start swinging. I know he’ll be doing the same.

“Him being Mexican, me being Māori, you just have that fire in you where you just love to go to battle. I’ll welcome it, and we’ll see who the better man is.”

In their first fight, which took place at UFC 245 in December 2019, Kara-France started well, knocked Moreno down toward the end of the first frame and won the round on the judges’ scorecards. “The Assassin Baby” responded well, made adjustments, and eventually overwhelmed Kara-France in the second and third rounds to sway the judges in his favor to hand Kara-France his first UFC loss.

Moreno’s victory that night was his first since the UFC cut him in 2018, and he parlayed that win into a three-fight streak that landed him in the first of three fights against current flyweight champion Deiveson Figueiredo a year after defeating Kara-France. Moreno would spend the next 13 months locked in that trilogy, which currently stands even at 1-1-1.

Along the way, Moreno earned fan-favorite status due to his relatable and infectious personality, as well as his propensity to get into entertaining fights, and Kara-France fully anticipates and embraces what is likely a heavily pro-Moreno crowd in Dallas on fight night.

“I welcome that,” Kara-France said. “I feed off their energy, and I know everyone back home is going to be watching it. That’s the energy I feed off, as well, knowing all my family, friends, New Zealand, all my ancestors, my tupuna, are going to be there in my corner watching me and helping me do what I need to do. I’m just going to channel it, and when I come out to my song ‘Poi E’ (by Pātea Māori Club), it just reminds me of who I’m representing, why I’m doing this and what I’m about. What I’m about to go do is be present, stay calm, calculated, use my composure, and eventually, we’ll find the shot.”

While Kara-France’s evolution is evident, he ponders the stagnation Moreno might have experienced preparing for the same opponent three camps in a row. To Moreno’s credit, he moved his training camp to Glory MMA under James Krause ahead of this fight, and Kara-France is anticipating the best version of the former champion.

That said, composure is key in the biggest spotlight of his career. It’s a moment for which he feels prepared, but it’s also where he draws from the experiences of the elite company he keeps around City Kickboxing. 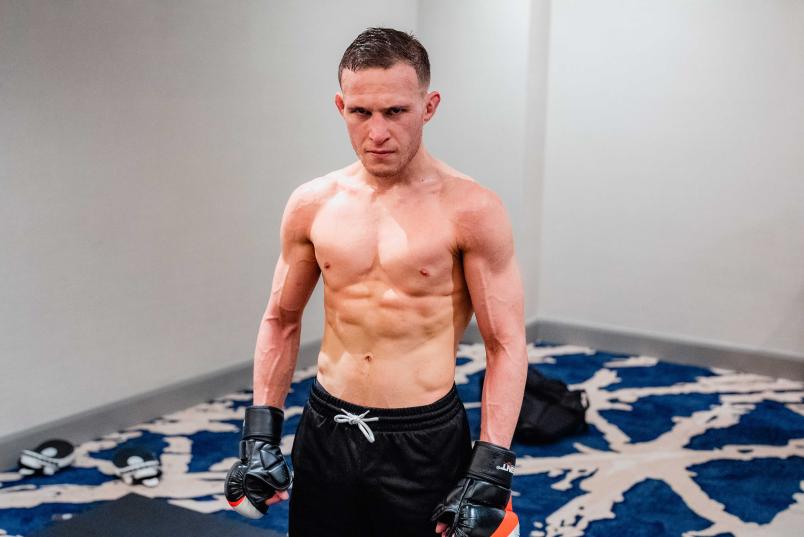 “I’ve visualized this for years, and now that it’s all here, it’s like déjà vu,” Kara-France said. “It’s everything that I expected. Seeing (Israel Adesanya) and Alex (Volkanovski) win titles and defending their belts for a long time, I’ve seen the way they handle fight week and what was to come, so it’s nothing new to me. That pressure that you have on yourself and knowing that more people are tuning in, more attention, more cameras, more lights, I welcome it. It’s something I’ve envisioned for so long, and now that we’re here, it’s all about timing.”

The timing all comes together in the American Airlines Center on July 30. Although it’s the co-main event and the first of two rematches, it projects as yet another highly entertaining flyweight title fight.

The road to this first shot wasn’t clean for Kara-France, but it only increased the weight he enthusiastically bears on his shoulders come fight night. Proudly representing his family, the Māori culture, City Kickboxing and, specifically, the uncle from whom he received his name, Kara-France feels like everything built toward this moment exactly as he needed it to.

“You’re seeing this whole different Kai - this switch that has happened,” he said. “Brandon wants everything that I want, and that’s to be a world champion. He’s had a taste of it being a former world champion, and I’m not going to back down.

“I’m going to take it to him, and you’ll be seeing my hand raised.”