Kai Kara-France Is Primed To Bounce Back

UFC Flyweight Kai Kara-France Has Faced Adversity Time And Time Again In His Career, He's Ready To Prove He Can Push Through At UFC 259.
By UFC Australia Staff • Mar. 2, 2021

“At City Kickboxing, there are only two acceptable reasons for missing a class,” explains Kiwi flyweight Kai Kara-France. “The first is if it’s your wedding day, the second is the birth of your child.”

The 27-year-old – set to face Brazilian Rogério Bontorin at UFC 259 – explains that he could have used that second excuse during his latest fight camp, a period which saw the birth of his son.

“But I didn’t even miss the session that day!”

That’s because, as delighted as he was to become a father, the fighter they call “Don’t Blink” is laser-focused on bouncing back from his defeat against Brandon Royval at UFC 253 last September and putting himself in contention for the 125-pound belt.

“The best way to come off a loss is to do what we do in the gym,” explains Kara-France. “I’ve been in camp since Christmas. It’s been a great environment and I feel better than ever. I’m keen to get back on a winning streak again. In 2021, I want to be active, I want to be busy. This is where I start to make my run at the title.” 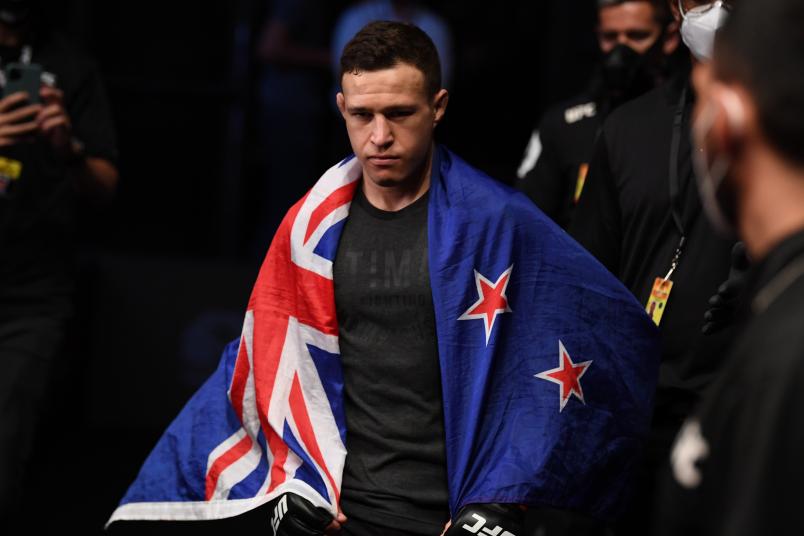 And it seems the UFC has confidence in the crowd-pleasing New Zealander, recently renewing his contract for another four fights. “Having job security means a lot,” notes Kai. “Especially when so many others are doing it tough. I’m very grateful to the UFC, and I’m blessed to be able to travel right now – the airports are deserted.”

Kara-France also suffered a temporary setback earlier in his career. Appearing on the 24th season of The Ultimate Fighter in 2016, he recorded an impressive win and a decision loss, but wasn’t offered a contract at that time.

Recalls the flyweight, “I arrived home in New Zealand at City Kickboxing, where I asked Eugene [Bareman] how to get back into the UFC. He said, ‘Turn up to training and the rest will take care of itself.’ It took two years, but he was right. I made my UFC debut in Adelaide in 2018 and ended up getting Fight of the Night and a 50K bonus.”

Training at what has come to be regarded as one of the world’s best MMA gyms, it’s no surprise to learn that Kara-France (21-9, 1 NC) feels well prepared for Bontorin (16-2, 1 NC).

“Yeah, we’ve got a few things up our sleeves,” he states. “We’ve done our homework. I’m expecting the best out of this guy. I know from past experience that Brazilians love to come forward. But I’ve fought more regularly than my opponent and I think it will show.” 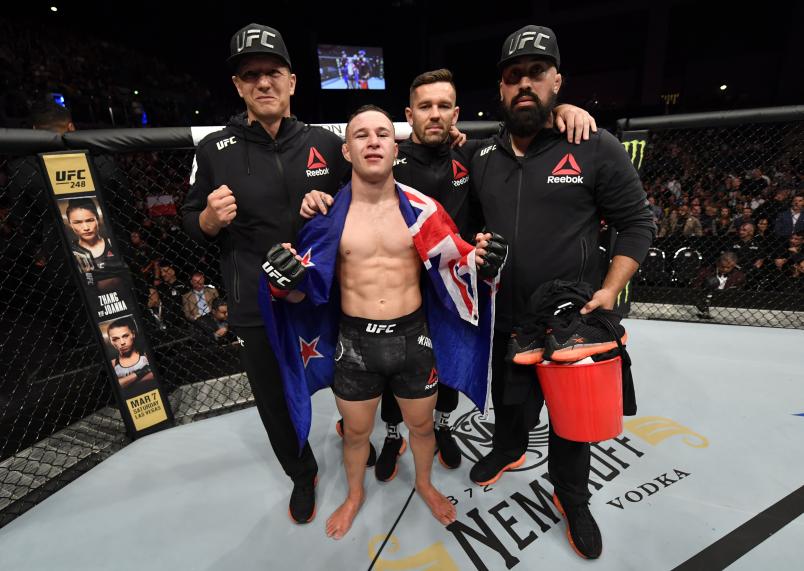 Kai Kara-France of New Zealand poses with his team after defeating Tyson Nam in their flyweight bout during the UFC Fight Night event at Spark Arena on February 23, 2020 in Auckland, New Zealand. (Photo by Jeff Bottari/Zuffa LLC)

In recent times, the flyweight division has become one of the most exciting and competitive in the UFC – and the young Kiwi is proud to be a part of it.

“This is the best the division has ever looked,” he enthuses. “Anybody in the Top 10 could beat anyone else. The champ, Deiveson Figueiredo, really comes forward and tries to finish his fights. One day, I want to be standing there in front of him.”

Some athletes have interesting pre-game rituals. For others, it’s more about getting into a special frame of mind. “Don’t Blink” falls into the latter camp.

“My Maori ancestors were warriors and I like to tap into that and use it as an energy source. When I’m in that state, I’m the Superman version of Kai.”

“At UFC 259, I’m going to come in and take my time. I want to do this for my son, to show that when you face adversity, you have to pick yourself up and go again. This year has been a difficult year. But even though I didn’t get a win in my last fight, I’m winning in life.”