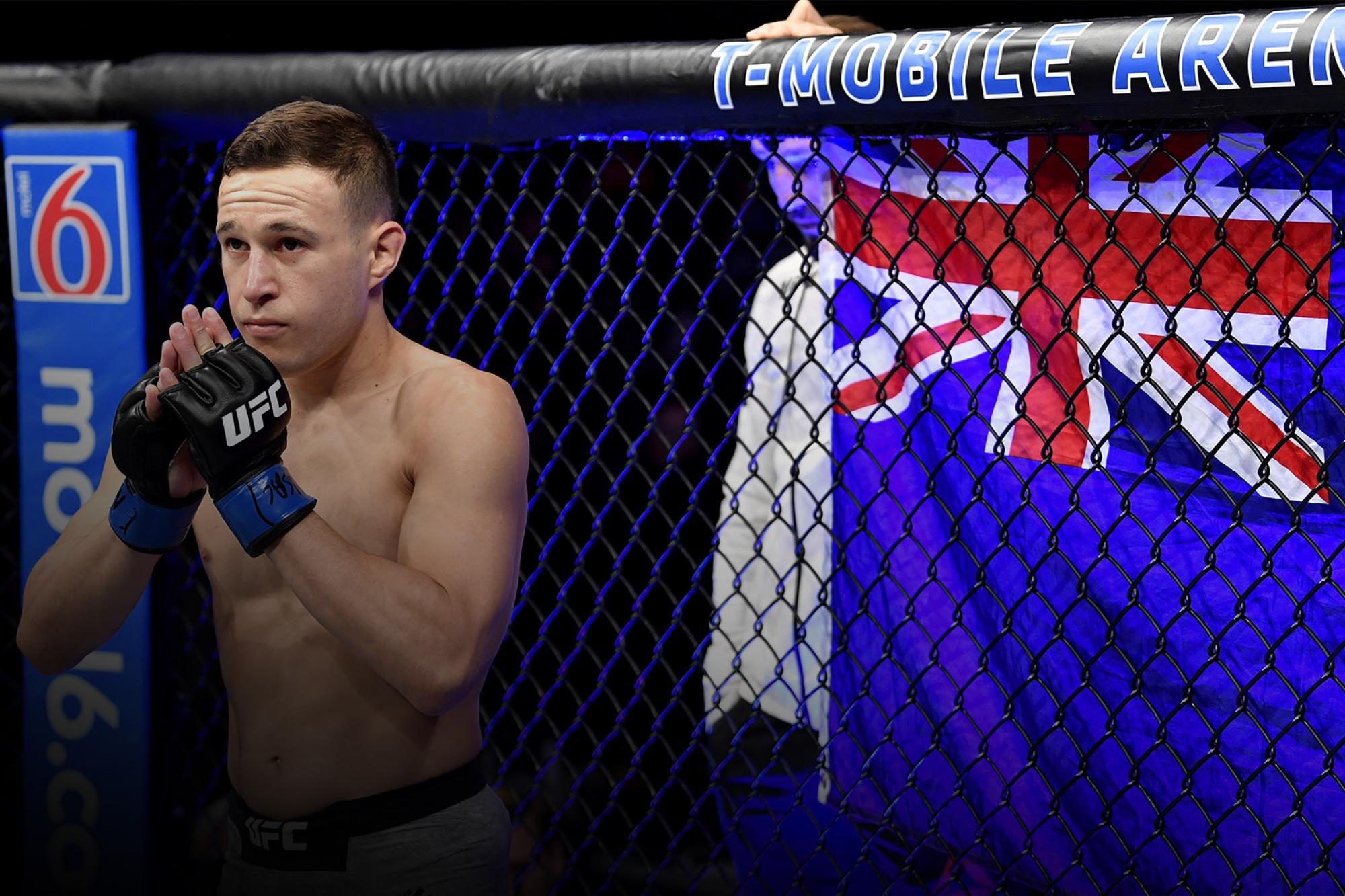 Kai Kara-France had a New Year’s routine at the outset of his professional career. Every year, he’d write out his goals and resolutions and, at the top of the list, the aspiring fighter would pencil in his biggest dream: fight in the UFC.

“Every year since I started my career, my New Year’s resolution was ‘make the UFC’ and for nearly 10 years, I couldn’t tick that off as accomplished,” said the flyweight contender, who returns to the Octagon this weekend in in a hometown showdown with Tyson Nam at Spark Arena in Auckland.

A pro since 2010, Kara-France got a little taste of what it would be like to compete on the biggest stage in the sport as a cast member on Season 24 of The Ultimate Fighter, but after losing to Alexandre Pantoja in the quarterfinals, he wasn’t offered a spot to compete at the finale.

He lost his first bout following the show, snapping a five-fight winning streak, but rebounded with three wins in seven weeks, hopeful that his impressive run of success and experience on TUF would land him a place on the fight card when the promotion returned to Auckland for a second time in the summer of 2017.

“I missed out when the UFC came back, when Mark Hunt fought Derrick Lewis,” explained the 26-year-old, who carries a 20-8, 1 NC record into Saturday’s clash with Nam. “I was there campaigning (to be included on that card). I fought three times in seven weeks just to kind of separate myself from the pack, but didn’t get a call-up.

“I was there, front row, visualizing my walkout, thinking about what it would be like if I had a knockout like Dan (Hooker) had against Ross Pearson and how crazy the atmosphere would be.

“But here we are now, a few years out from that dream, and it’s becoming a reality,” he added. “It’s all right in front of me and we’ve been doing all the work to make sure that we’re covering our tracks. I’m coming into this fight fully confident because I’ve been through so much already in my career.”

While he was able to cross “make it to the UFC” off his personal bucket list at the end of 2018, this weekend’s bout against Nam still carries a tremendous amount of importance for the Auckland born and raised flyweight.

Kara-France has only fought in his home country three times, including the first two fights of his professional career.

In the eight years since he’s competed regularly, he’s only fought on home soil once, registering a first-round rear naked choke victory in what turned out to be his final bout before joining the UFC roster. During that time, Kara-France has competed in 10 different countries, including China, Malaysia, Guam, and Japan. Last December, he fought in the United States for the first time, dropping a unanimous decision to Brandon Moreno in a close, competitive fight on the UFC 245 undercard.

Where some competitors aren’t all that keen about competing at home due to increased media responsibilities, heightened expectations, and old friends looking to reconnect in order to score tickets, Kara-France, like the rest of his fellow New Zealanders set to compete on the card at Spark Arena, takes great pride in getting to represent his nation and his people at home this weekend.

“It’s something very special,” he said. “I am Maori, I do come from the native people of New Zealand, so being able to perform in front of them live is incredible. A lot of my family hasn’t seen me fight live because a lot of my fights have been overseas, so I’ve definitely not taken this for granted.

“Yesterday, being welcomed onto a marae was an incredible honor and moment,” continued Kara-France, who joined several of his teammates in a traditional ceremony at Orakei Marae. “I’ve just been trying to embrace all of that positive energy and channel that into this weekend.”

Not only does this weekend’s event provide Kara-France with the opportunity to compete at home on the UFC stage that he’s long coveted, but it also affords him the chance to make a quick return to the Octagon and get back into the win column after having his eight-fight winning streak snapped by Moreno in mid-December.

As with all of the flyweight dynamo’s fights, his UFC 245 encounter with his TUF 24 castmate was a spirited affair where both landed some quality shots and the timing of the numerous simultaneous exchanges dictated the final scores. Though Kara-France had his moments, Moreno often beat him to the punch, handing the emerging contender his first loss since entering the UFC.

“It’s a game of inches and it could have gone either way,” he said of his Las Vegas debut in December. “It was a close fight and hats off to Brandon; he was the better man that night. He adjusted very well and that’s something I need to make sure of is that we make the adjustments when needed.

“I’ve had a quick turnaround,” he continued. “My last fight was 10 weeks ago in Las Vegas at UFC 245. I didn’t get the results I wanted and the best thing I could have done was get straight back in the gym and run it back, so what better way to do it than in my hometown, in front of everyone that I’ve grown up with. Hopefully I’m going to give the best version the UFC and the world has seen.”

With a breakout showing in mind, Kara-France believes he has the right dance partner needed to deliver the kind of performance that ignites the partisan crowd that is sure to pack Spark Arena on Saturday night.

“He’s from a Polynesian background and based out of Hawaii, so with me being from New Zealand, it’s going to be a case of who’s got a better right hand,” he said of his matchup with the 36-year-old Nam, who dropped his short-notice promotional debut against Sergio Pettis last September. “I know he likes to strike and he’s been saying he wants to meet me in the center of the Octagon and throw down, so I’ll be happy to oblige.

“I feel like I’m going to be too quick, too smooth, and too ready, so I can’t wait.”

After sitting cageside the last time the UFC landed in his hometown and only getting the opportunity to wonder what it would be like to secure a blistering finish inside the Octagon, Kara-France has been counting down the weeks, days, and hours until he’s able to make the walk in front of a raucous collection of his friends, family, and fellow New Zealanders.

With just a couple more days to wait, the anticipation and excitement are starting to get dialed back, replaced by an appreciation of the opportunity before him and a clear focus on creating an incredible memory at home this weekend.

“Winning at home would mean the world to me,” he said. “This is what dreams are made out of. Having that feeling of winning and embracing it, sharing it with your loved ones and the people that support you from the start — this is everything for me. This is why I’ve been so motivated and the fire has been lit underneath me.

“Come fight night, I’m taking no prisoners,” he added. “He’s going to feel that he’s in hostile territory right from the get-go. He’s going to feel my presence and I’m going to harness all that energy in the stadium at Spark Arena and use that to perform at my best.

“Hopefully I’ll live up to my nickname ‘Don’t Blink’ and get a highlight reel knockout.”