Kai Kara-France Bet On Himself And Won

Few circumstances scream “all-in” more than leaving university and buying a one-way ticket from New Zealand to Thailand at 18 years old to chase a career in fighting, and that’s exactly what Kai Kara-France did.

Despite some pushback from his family ¬— his father and brother are both lawyers — Kara-France found himself at a tryout at Tiger Muay Thai and won a scholarship to train at the gym, and that’s what he did for the next four years.

“I was really stubborn,” Kara-France told UFC.com. “If I wanted to do something, I’d always set my mind to it, and I would kind of stick it out until I actually got to that goal.”

In a way, he found his version of higher education but, after a while, he felt himself stagnating.

It was time to go home.

“Realized the grass isn’t greener on the other side,” he said. “(I) came back home, and then realized I can be homegrown. I can be back home and progress in my mixed martial arts career.”

A move to City Kickboxing in Auckland gave his career the jumpstart he needed, and he is now riding a seven-fight win streak, including a 2-0 record in the UFC. His first and second fights were just 10 weeks apart, but since picking up his split decision win over Raulian Paiva at UFC 234, he allowed a nagging hand injury to heal fully. Six months have passed since then, which he called a “blessing in disguise,” and added that he was still in the gym helping teammates prepare for their own fights.

It’s a testament to the environment he found at City Kickboxing, where the likes of interim UFC middleweight champion Israel Adesanya and UFC lightweight Dan Hooker have also made a home for themselves.

“There’s no ego,” Kara-France said of the gym. “There’s a lot of intelligent people with smart ideas about this fight game, and this takes a lot of pressure off you because you’re not going in alone. You know you’ve got so much support and so many people who put this into you.” 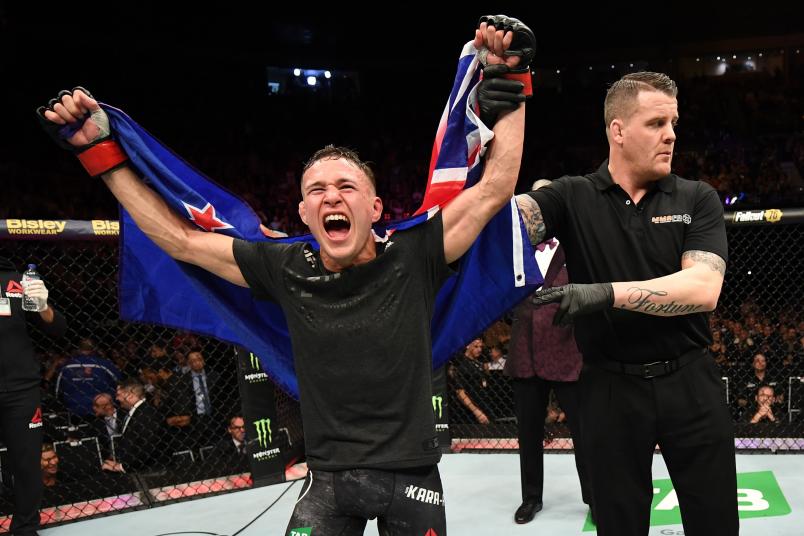 MELBOURNE, AUSTRALIA - FEBRUARY 10: Kai Kara France of New Zealand celebrates his victory over Raulian Paiva of Brazil in their flyweight bout during the UFC 234 at Rod Laver Arena on February 10, 2019 in the Melbourne, Australia. (Photo by Jeff Bottari/Zuffa LLC/Zuffa LLC via Getty Images)

MELBOURNE, AUSTRALIA - FEBRUARY 10: Kai Kara France of New Zealand celebrates his victory over Raulian Paiva of Brazil in their flyweight bout during the UFC 234 at Rod Laver Arena on February 10, 2019 in the Melbourne, Australia. (Photo by Jeff Bottari/Z

Between Kara-France, Hooker, Adesanya and UFC featherweight Shane Young, City Kickboxing is undefeated in five fights this year. Kara-France jokes about feeling “no pressure” to maintain that perfect record, but he knows “there’s no easy fight” in the UFC.

Regardless, he’s happy to be a part of building the gym’s reputation and representing New Zealand as he navigates the rejuvenated flyweight division.

“It’s an amazing thing to see, and it’s kind of surreal to be a part of it,” he said. “When I started my mixed martial arts career, there wasn’t a pathway in New Zealand of where to get to the top level and the UFC. We all were kind of figuring it out on our own.”

Pulling back the curtain, he described the relationship between Hooker and Adesanya as love-hate, saying they’re “best mates but they hate each other,” but he doesn’t get in the middle of the two when they’re having it out because “size does matter” in that situation. That said, he is hoping to join them on the UFC 243 card in Melbourne, but he’s not getting ahead of himself. He’s aware that he can’t look past Mark De La Rosa, who is returning to 125 pounds rejuvenated and confident, in his own right.

At 26 years old, Kara-France is poised to make plenty of noise in the flyweight division, and he knows extending his winning streak to eight bodes well for him as he climbs the rankings. If anything, his stubbornness from eight years ago is more than paying off, and now, he’s back home representing the place he felt he needed to leave to do exactly what he’s doing.

“I’m fighting the best in the world,” he said. “My mentality going into my UFC fights, I’ve just got to prepare like I’m fighting the champ. I’m my own harshest critic, and that’s why I put everything into this.”