If you had to choose a line from classic literature to sum up Kai Kamaka’s UFC career to date, it might be tempting to choose “It was the best of times, it was the worst of times.”

Kamaka started off with a bang: a short-notice debut win at August’s UFC 252 event that earned he and his opponent, Tony Kelley, Fight of the Night honors. With a scant five days to prepare, he emerged with the win and an extra $50,000 to boot. It was a hell of a way to get your foot in the door.

“The thing I remember most is going through a war…and winning,’ he smiles, noting that in the whirlwind of that fight week, there’s little else he remembers.

His second fight didn’t go as well, landing on the wrong side of a TKO in his sophomore outing vs Jonathan Pearce three months later that halted a six-fight win streak. Again, it might be tempting to choose the famous Charles Dickens line as summary, but Kamaka would disagree.

“I don’t think I would change anything,” he says. “The loss has helped me to get better and mature as person. Jonathan Pearce was able to make adjustments, I wasn’t. I wasn’t mature enough. That’s why I needed that loss. I needed that to be who I am today.” 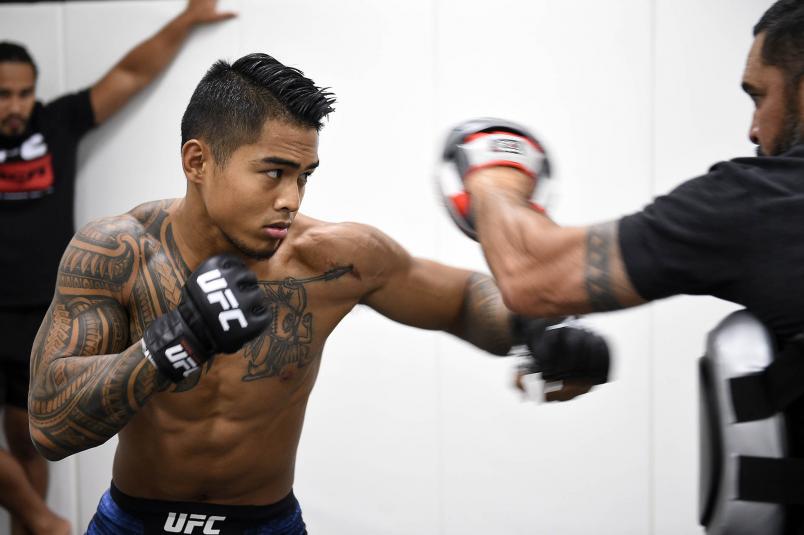 Kai Kamaka warms up prior to his fight during the UFC 252 event at UFC APEX on August 15, 2020 in Las Vegas, Nevada. (Photo by Chris Unger/Zuffa LLC)

And who he is today is a happy resident of Las Vegas. Those first two bouts came within the tumult of moving not only himself to Sin City, but also his entire family…from Hawaii.

“That transition in my life…I’m glad I’m past it. Moving your family across the ocean and moving all your household goods, shipping your car; that was a hassle. Taking a fight was the only thing that felt normal during that time. I didn’t know how hard it was to ship a car. For everyone thinking about moving overseas: it’s much tougher than you think.”

That was last November, and now the waters have begun to calm.

His learning has continued Xtreme Couture, the renowned Vegas gym he now calls home and where he has expanded his potent blend of boxing and wrestling.

“The last six months I’ve been here, it’s been a real eye-opener. I’m at a gym that has greatness walk in from the beginning of its time until now with Francis Ngannou and guys like Dan Ige. I’m here to be the best fighter in the world and the best version of myself. I just show up with that mindset every day.” 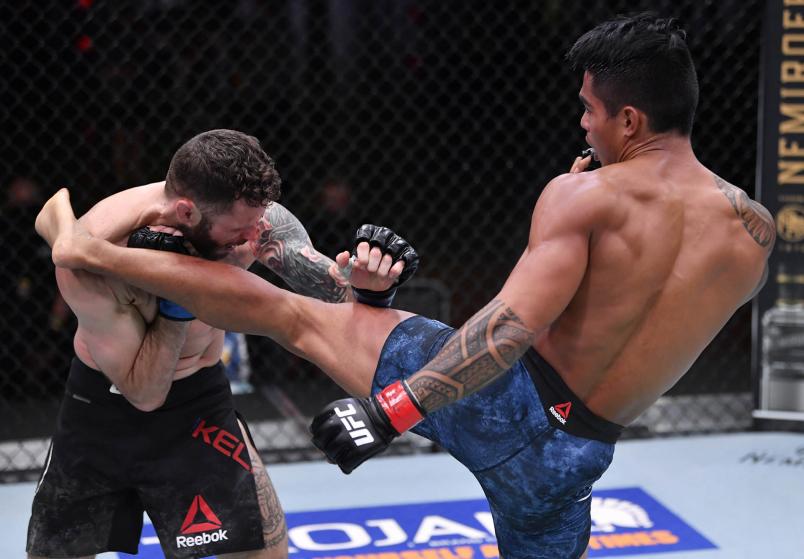 He’ll use what he’s learned next against TJ Brown this Saturday on the prelims of UFC Fight Night: Reyes vs Prochazka. Brown is hungry, still hunting for his first win in the Octagon. Kamaka has some awareness of this, but tries to stay away from thinking too much about individual opponents.

“He likes to step on the gas, and so do I. I plan on being in his face, and from what I’ve seen and heard, he likes to do the same. I can’t think too much about him, because if I get paranoid about my opponent, I’ll be out of here in no time,” he says, pointing to the Octagon behind him at the UFC APEX.

The APEX is a room where Kamaka has gotten a little cozy. He can sleep in his own bed the night before and take a short drive to the venue for the fight. He was as thrilled as anyone to watch the full-capacity crowd at UFC 261 last week, but he’s not exactly counting the minutes until it happens for him, either.

There will be plenty watching Saturday night as “The Fighting Hawaiian” demonstrates what he can do with the benefit of a full camp.

“It’s the best I’ve ever felt. Cliché to say, but it really is. My first two UFC fights, I had combined eleven days notice. This one I had eleven weeks. I actually feel like a UFC fighter prepared for a UFC fight.”