Nearly two years removed from her last UFC appearance, the 33-year-old returns to action in a certified banger against Lucie Pudilova at PNC Arena.
By E. Spencer Kyte, on Twitter @SpencerKyte • Jan. 23, 2020

The fact that Justine Kish is stepping into the Octagon on Saturday evening in Raleigh, North Carolina automatically tells you a lot about the character, heart, and mental makeup of the former Ultimate Fighter competitor.

Nearly two years removed from her last UFC appearance, the 33-year-old returns to action in a certified banger against Lucie Pudilova at PNC Arena. In the time since she last competed, the spirited Muay Thai stylist has undergone a fourth major knee surgery, worked through an extensive 12-month rehabilitation program, and stripped her approach in the cage down to the studs in order to rebuild it to her liking.

And that’s just the professional challenges she’s faced on a road that may have prompted others to call it quits, but only served to strengthen her resolve even further.

“I know what I’m capable of, I know what I can do, and the UFC audience hasn’t seen it yet,” said Kish, who enters Saturday’s meeting with Pudilova on a two-fight slide and sporting a 6-2 record overall.

Kish is far from the first fighter to argue that the audience has never seen her at her best and she won’t be the last, however where many are simply searching for ways to justify poor results and pump themselves up for future engagements, it’s hard not to agree with her self-assessment.

Following a solid Muay Thai career, Kish transitioned to MMA full time in the summer of 2013 with a 1-0 record and racked up three victories over the next six months, including a submission win over future Invicta FC competitor Christine Stanley and a unanimous decision victory over Randa Markos. That unbeaten start earned the Russian-born former orphan a place on Season 20 of The Ultimate Fighter, but before she could compete in the tournament to crown the inaugural women’s strawweight champion, a major knee injury forced her to the sidelines.

She made her promotional debut a full year after her fellow cast members, scoring a unanimous decision win over Nina Ansaroff at UFC 195 and followed it up with a similar result against Ashley Yoder, pushing her record to 6-0 overall. Consecutive losses to Felice Herrig and Ji Yeon Kim followed, bumping her into the background before this latest injury once again sidelined her for an extended period of time.

“Once I was cleared, I dove head-first into my training camp,” said Kish, who wanted to take a full 12 months to rehab after having rushed back to training following previous injuries only to face surgery a couple more times. “I went back to the absolute basics because it all needed sharpening.

“I spent four months in Asia, decompressed in Las Vegas because the jet lag was insane, and then I went back to Los Angeles with Kenny Johnson, who is the coach I was with when I was undefeated in MMA. The last two fights I had in the UFC, I moved back to the East Coast so I could take care of my mom because her health was suffering, but that didn’t work out because I was distracted and pulled in too many different directions.

“I feel like a gypsy, but everything is coming full circle right now,” she added. “My coaches told me today, ‘She has no business beating you,’ which was good to hear because two years away does stuff to you mentally.”

Though Kish has moved back to the Los Angeles area, the fact that she’s returning to her home state means a great deal to her, as it not only gives her an opportunity to redeem herself following her split decision loss to Kim last time out in Charlotte, but it will also give her a chance to spend some quality time with the woman she credits with making all of this possible. 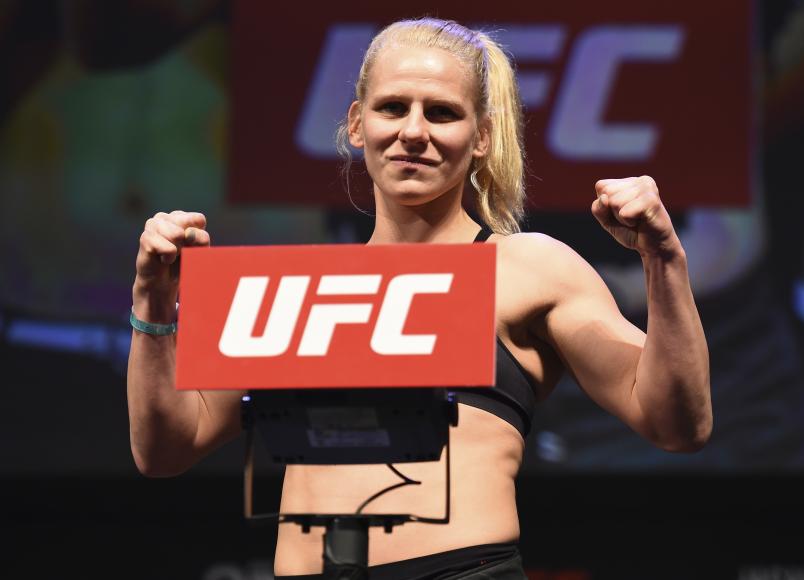 “With mom, it’s tough; she has her good days and her bad days,” said Kish, noticeably choking up as soon as she began talking about her mother. “She has a bad liver, so when her ammonia levels go up, there is a state of confusion and that’s a tough conversation to have, but when everything is good, she’s so sharp. She had heart failure, diabetes, a bad liver — she’s almost 80 — and it’s really difficult, but I really want her to see me at my best.

“Without her, I wouldn’t have had any of these experiences. At five years old, I was about to be kicked out of the orphanage and then you’re on your own. I was taking care of myself, other children and she rescued me, gave me this gorgeous life and I don’t want her to ever think I took it for granted. I was a wild kid — I was such a s***head, but she always backed me up and took care of me.

“I want her to see me with a performance I’m really happy with and I want to take care of her the way she took care of me,” she added. “That’s really why I’m doing all this — I want to make her proud.”

The combination of not wanting to question if she walked away too early, yearning to deliver the kind of performance she can be happy with, and wanting to show her mom that her ex-hellion is all grown up and a certified bad ass had Kish champing at the bit to book another fight and return to the Octagon.

When the news came that she would be paired off with Pudilova, the 33-year-old was overjoyed.

“She’s forward, she’s aggressive, and she comes to fight; it’s a Fight of the Night kind of matchup,” she said of this weekend’s pairing with the 24-year-old from the Czech Republic, who has dropped three straight, but has earned a post-fight bonus in two of those three contests. 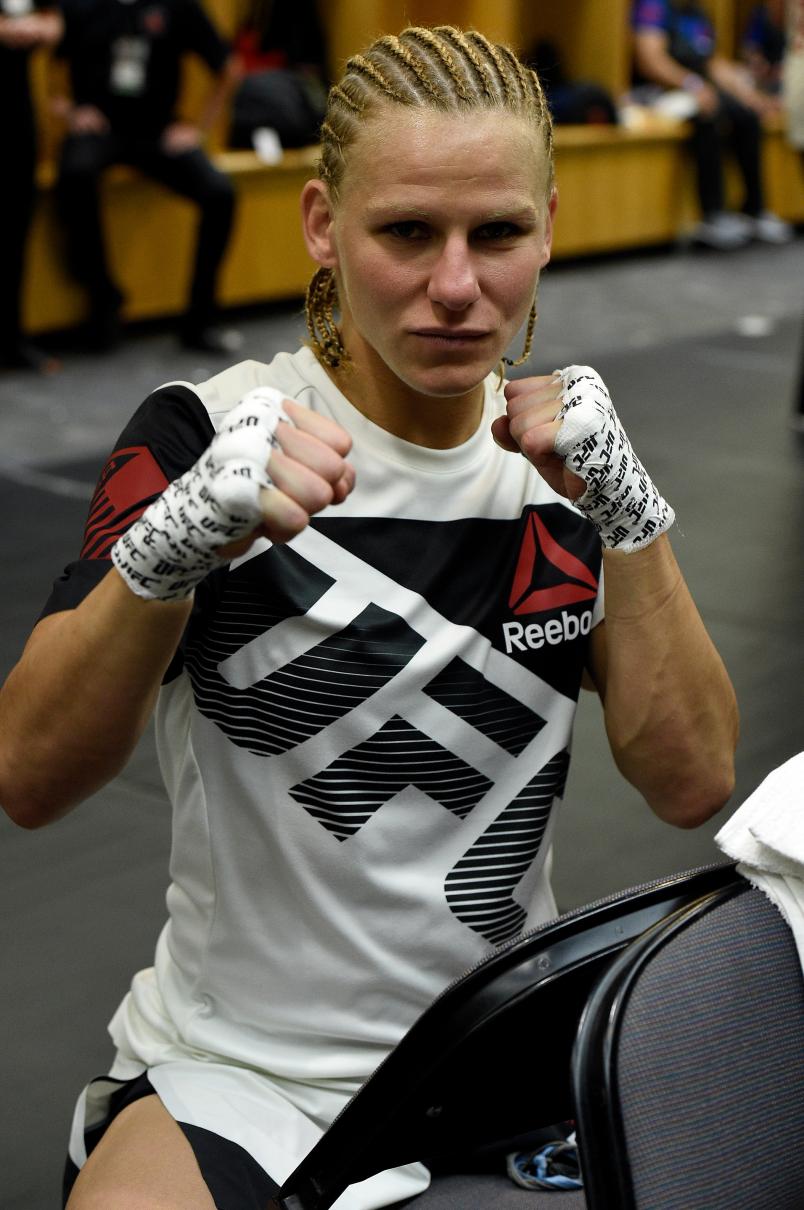 OKLAHOMA CITY, OK - JUNE 25: Justine Kish warms up prior to her fight against Felice Herrig during the UFC Fight Night event at the Chesapeake Energy Arena on June 25, 2017 in Oklahoma City, Oklahoma. (Photo by Brandon Magnus/Zuffa LLC/Zuffa LLC via Getty Images)

OKLAHOMA CITY, OK - JUNE 25: Justine Kish warms up prior to her fight against Felice Herrig during the UFC Fight Night event at the Chesapeake Energy Arena on June 25, 2017 in Oklahoma City, Oklahoma. (Photo by Brandon Magnus/Zuffa LLC/Zuffa LLC via Getty

MORE FROM UFC RALEIGH: McMann Creates Her Own Expectations | Cifers Ready For Her Moment | Fight by Fight Preview | Fighters On The Rise | Hill Reaching Her Peak

“The fights I’ve had haven’t really been fights — my opponents have been mart, taking me down, staying on top, but getting more beat up by the cage than the people doesn’t make sense in my head. I have marks from the cage and the canvas, but I’m fine; there is no damage on me physically, so how does this constitute a fight?

“It’s a relief that I know I won’t come out of there feeling like I ran a 5k instead of being in an MMA fight.”

Five years after appearing on The Ultimate Fighter, four fights into her UFC career, and two years removed from her last appearance, Kish finally returns on Saturday night, facing an ideal opponent and backed by a partisan crowd just three hours east of where she grew up.

After refusing to let her latest injury cripple her spirit and dash her dreams, the resilient warrior is ready to start fighting to her full potential and showing the UFC audience who she really is inside the Octagon.

“I get asked this a lot — ‘Why are you doing this again?’ — and the answer is I’m just not done,” she said. “And I think this fight is going to help me showcase the things I’m dying to showcase.”