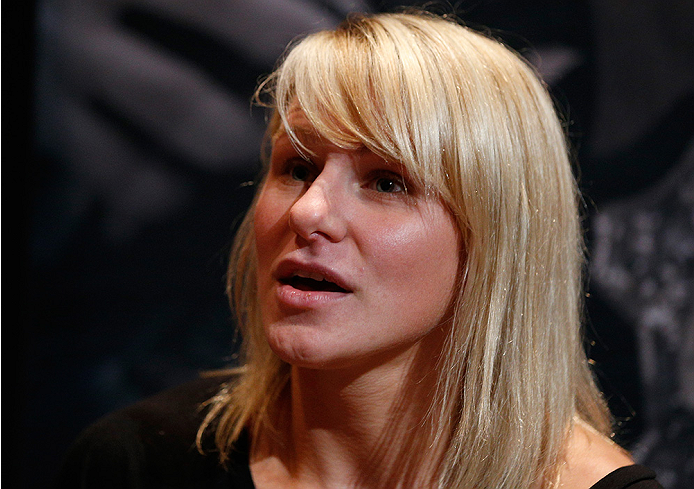 A member of Team Pettis on season 20 of The Ultimate Fighter, Justine Kish’s stay in the world of reality television was far from what she expected it to be. A torn ACL guaranteed that and took her out of the competition before she was even able to fight.

This Saturday, she returns to active duty for the first time since the injury, and the 27-year-old strawweight wants to change the impression newer fans of the sport have of her. It’s not a bad thing, just an inaccurate portrayal.

“It’s funny because I’ve done a lot before the UFC came into the picture, but it seems like I’m mostly known right now for my injury on the show,” she said. “It’s hard to hear people say that they wanted to see me compete. I’ve been competing a long time.”

With more than two dozen fights under her belt in kickboxing and MMA, Kish is far from a newcomer, despite having just a 4-0 slate in MMA. Like current 115-pound champion Joanna Jedrzejczyk, Kish is a former Muay Thai world titlist, and she made her bones in the art of eight limbs in Thailand. MMA was the next mountain to climb, and after winning her first four bouts, including a 2014 win over current UFC contender Randa Markos, TUF 20 was going to be her introduction to the world.

Then her knee gave out, and everything screeched to a halt.

“I worked really hard for that opportunity, and I didn’t go in there just to compete,” she said. “I went in there for the belt. When I was removed from that, it was daunting and I was upset. I gave myself a few good days to sulk about it, but then I gave myself other things to focus on and decided to think as positive as possible for the duration of the show.”

A year later, the strawweight division looks a lot different than it did in December of 2014. The first champion, Kish’s Team Pettis squadmate Carla Esparza, was dethroned by Jedrzejczyk in March of this year, and the Polish standout has looked dominant while a long list of talented contenders jockey for position in the top 10.

Kish, who faces Nina Ansaroff in her return bout in Las Vegas this Saturday, couldn’t be more excited with the way the division looks now.

“Ever since TUF 20, it has grown exponentially talent wise,” she said. “There are so many amazing female fighters out there, but the people were not seeing them and they’re just now coming in. The UFC is such a big platform that these girls are finally getting recognized. Nothing against Carla and the things that she’s done and accomplished, but I had a feeling that she wasn’t going to have that belt for a long time.

"As soon as I was injured and the show was finished and she had won the belt, I was like ‘okay, I hope she knows I’m going after that.’ But I had a feeling it would shift hands a few times before I got a chance to get my hands on it. I think Joanna definitely deserves to be a titleholder right now. She’s so experienced, has competed a lot around the world, and the division is exciting, it’s thrilling, and I believe it’s only going to get better.”

Kish, a native of St. Petersburg, Russia, may be a little biased toward the young lady at the top, because if she does get a crack at Jedrzejczyk, it will match striker vs. striker, and Kish can’t wait for such a battle.

“I look at that and I’m like ‘oh my God, I can’t wait to get in there,’” she said. “I hear that a Muay Thai girl has the belt now, and I think ‘I get someone who wants to strike with me now.’ I’ve always gone against wrestlers and jiu-jitsu players, and very few times have I gone against a solid striker. And as soon as she (Jedrzejczyk) got the belt, I thought that this will be an amazing matchup.”

“Relax, you’ve got to get through the door first. But I want to go against her. We can showcase our skills and what Muay Thai looks like. I do have to be patient though, and work my way up equally like everybody else does.”

That work starts Saturday, and it can’t come soon enough.

“I’m so hungry and dying to get a taste of competition again,” she said. “Even in my own training, I try to mimic the feeling every day, and even the anxiety. But nothing compares to the day of competing. I’m hungry for it and thirsty for it, and I’m so excited. I can’t wait to see how it all comes together.”