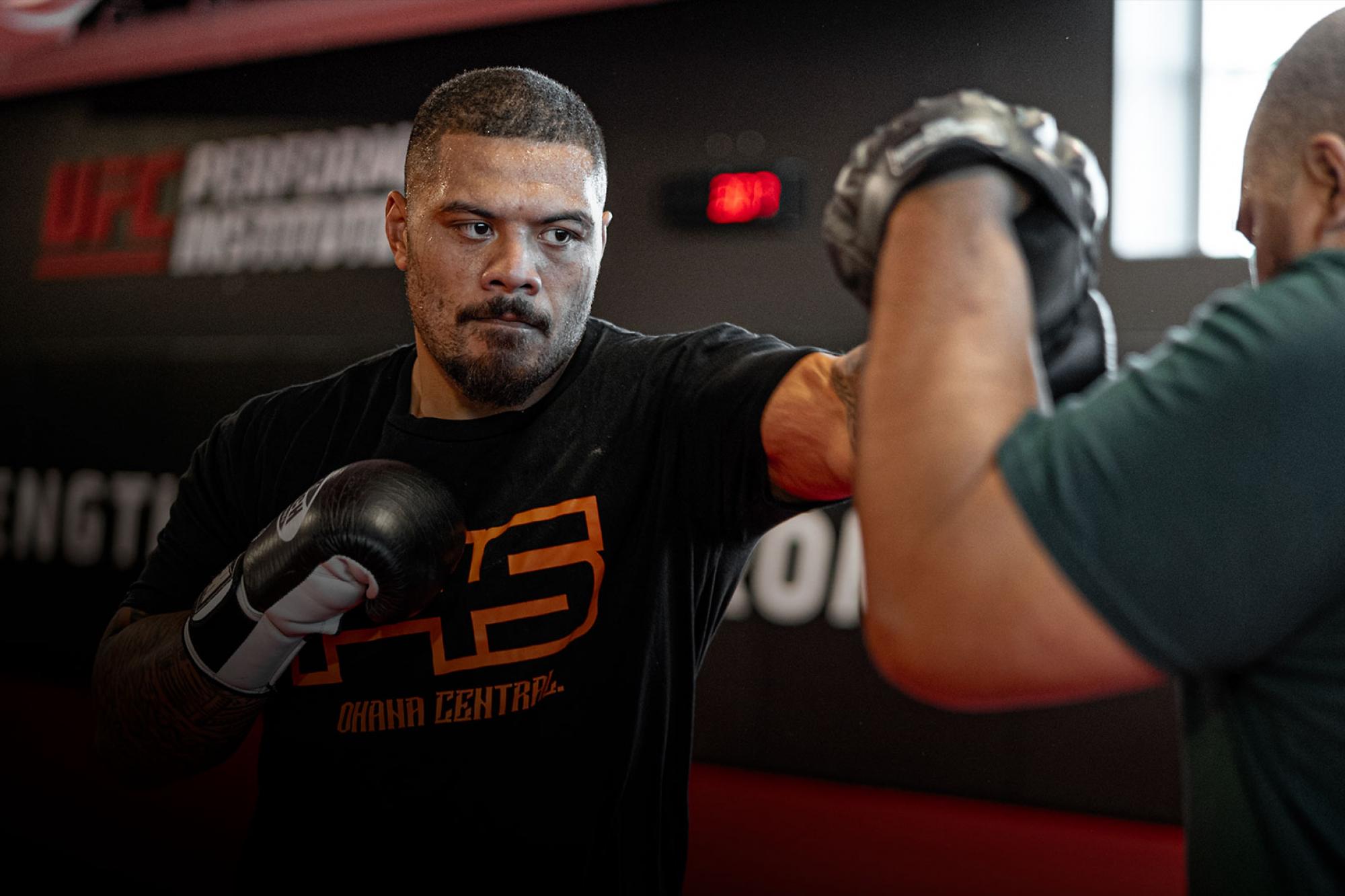 With As Many Fights Inside The Octagon As He Does Outside, Justin Tafa Hopes To Let It All Go On May 22
By Zac Pacleb on Twitter @ZacPacleb • May. 20, 2021

Half of Justin Tafa’s fighting life has taken place on the largest stage in the sport, which sounds like a grand statement but is just a testament to how early the 27-year-old is into his professional MMA career.

Tafa made his UFC debut at UFC 243 sporting just a 3-0 record. He’d earn his first UFC win in style a few months later, and he followed that up with a close, but incredibly entertaining, split decision loss to Carlos Felipe to start 2021.

“I think I’ve grown a lot, especially as a person just having this kind of thing – publicity and also the social media aspect of it,” Tafa told UFC.com. “I’ve learned a lot in a short amount of time, and I’m just blessed, and I’m ready to go.” 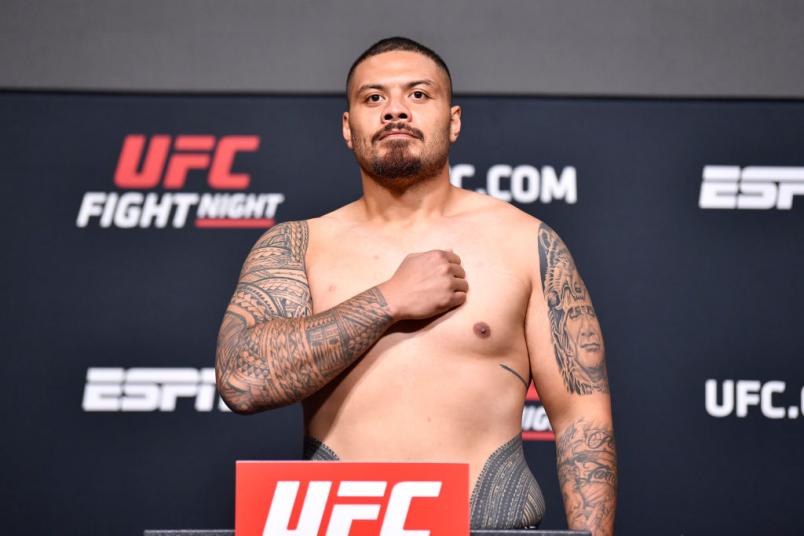 Justin Tafa of New Zealand poses on the scale during the UFC Fight Night weigh-in at UFC APEX on May 21, 2021 in Las Vegas, Nevada. (Photo by Chris Unger/Zuffa LLC)

As far as the fighting goes, it’s relatively straightforward for Tafa. He wants to put on an entertaining show for fans and hopefully earn performance bonuses along the way. That said, he did find the professional aspects of the UFC the most surprising.

“Everything is just done for you, I guess,” Tafa said. “I get home and tell my missus, ‘Oh, I was getting fed well (laughs).’ I didn’t have to do anything. It’s just crazy, during fight week, you’re looked after well, and it’s something that I won’t take for granted.”

Fighting aside, Tafa did value the added experience in the Octagon although he found himself on the unfortunate side of the judges’ scorecards. In particular, he enjoyed the chance to go all three rounds for the first time in his career.

After catching a couple inadvertent eye pokes from Felipe, the two slugged it out in a relatively high-paced, action-packed affair that more than once featured the two giants standing and trading in the center of the Octagon, much to the crowd’s delight. Tafa said he was happy with the resiliency he felt he showed in the fight despite the loss. 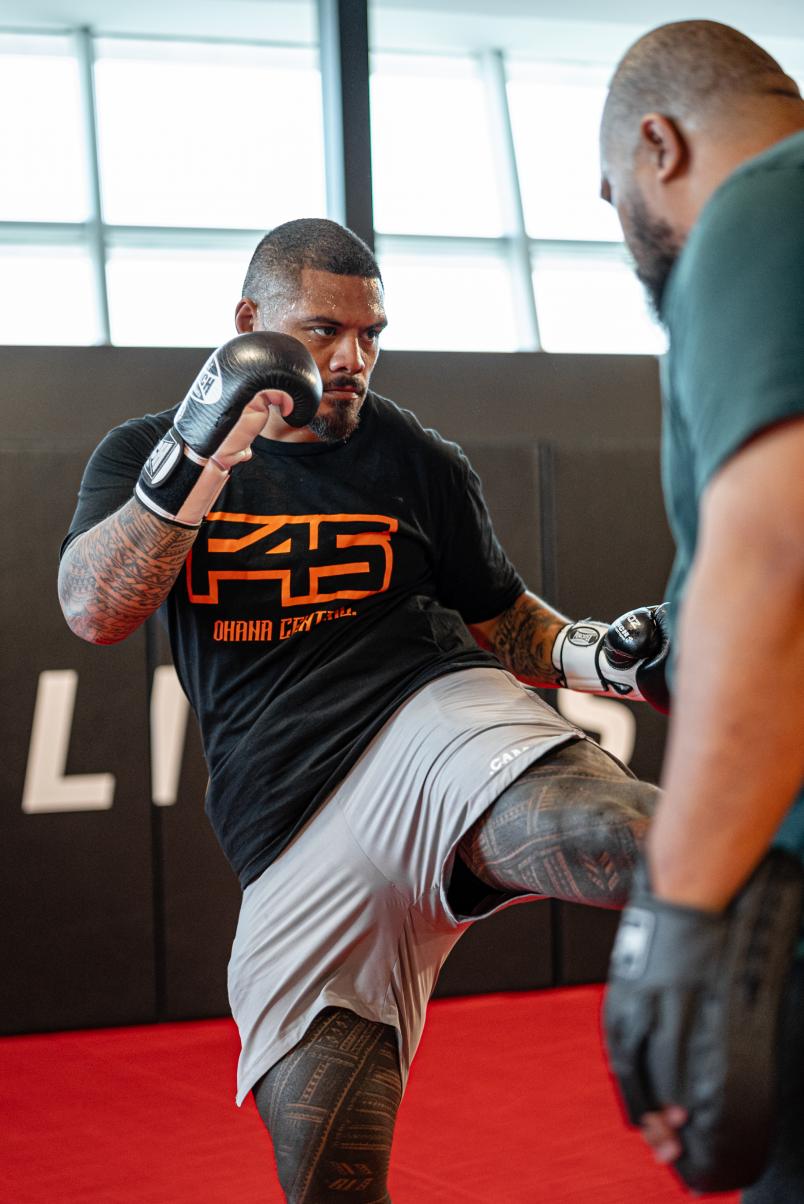 Justin Tafa trains at the UFC Performance Institute on May 20, 2021. (Photo by Harrison Green)

“As good as a KO or a submission in the first round is, you always want to see how you react to that adversity of having to go the distance, especially with another person that strikes just as much as yourself,” Tafa said. “I thought that I ticked a lot of boxes and answered a lot of questions for a lot of people.”

Up next, Tafa takes on Jared Vanderaa at UFC Fight Night: Font vs Garbrandt, where the Aussie will hope to bring his Octagon record up to .500. Tafa said he only watched a bit of Vanderaa’s previous work before it got “a little boring” and deciding to turn it off. Tafa did respect Vanderaa’s vast advantage in terms of professional experience, however. Vanderaa comes into the fight with 16 pro bouts in tow, and although Tafa holds the upper hand in terms of Octagon time between the two, Tafa knows that pro fighting is fighting. 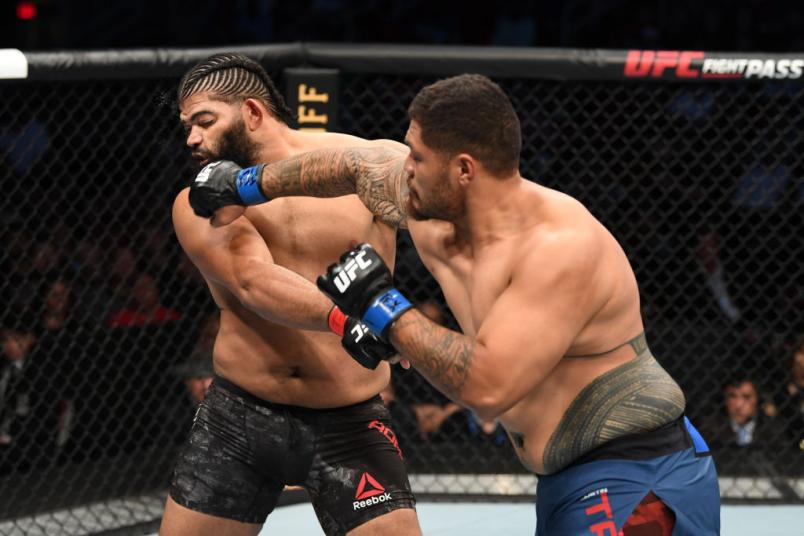 With that in mind, Tafa hopes he can draw Vanderaa into a more crowd-pleasing fight than perhaps he has been involved in previously. After the work is done, Tafa mentioned his hopes to fight a couple more times this year and start scratching around the Top 15, but naturally, he isn’t looking past his opponent, either. This walk to the Octagon will mean Tafa has fought more times in the UFC than outside of the UFC – an accomplishment no matter what those numbers actually are, and Tafa hopes to keep building on it while also drawing eyeballs each time he makes that vaunted walk.

“I’ll just try to bring that excitement out of him,” Tafa said. “I know he’ll try his ways, but I’m all about putting on a show. At the end of the day, this is entertainment. As long as I fight, I want to be an entertaining fighter.”