Justin Tafa's debut didn't go as planned, but he is ready to bounce back and make the people of Samoa proud.
By E. Spencer Kyte, on Twitter @SpencerKyte • Feb. 7, 2020

Justin Tafa made his UFC debut on the main card of UFC 243 last October at Marvel Stadium, striding out to the Octagon for the first time in front of the largest crowd ever assembled in the promotion’s more than 25-year history, surpassing the record set the first time the UFC ventured to the massive venue in Melbourne, Australia.

A crush of cheers crashed down on the 26-year-old heavyweight as he made the walk to the cage, ready to square off against fellow newcomer Yorgan De Castro in the opening bout of the pay-per-view main card capped by the middleweight title unification bout between Robert Whittaker and Israel Adesanya.

More than 57,000 people packed the stadium to take in the 11-fight card, which are roughly 56,000 more people than were present for Tafa’s final bout before arriving on the biggest stage in the sport, literally.

“I try to still explain it, but it’s just something you can’t describe,” Tafa said with a laugh when asked to articulate the difference between walking out to compete at the Mansfield Tavern in Brisbane and stepping through the curtain to open the UFC 243 main card in front of the biggest crowd in UFC history. “From fighting in front of 500 people to a record attendance is a big difference. 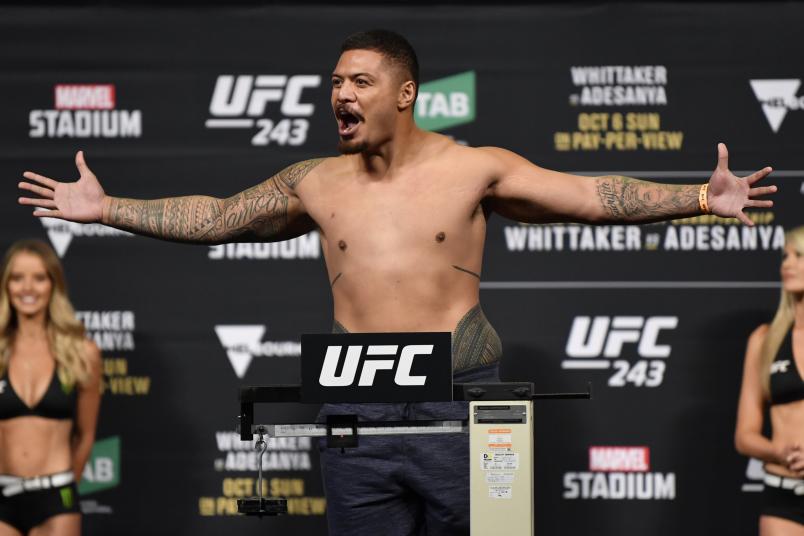 Justin Tafa of New Zealand poses on the scale during the UFC 243 weigh-in at Marvel Stadium on October 05, 2019 in Melbourne, Australia. (Photo by Jeff Bottari/Zuffa LLC via Getty Images)

“The atmosphere, the magnitude of the event is what really struck me,” continued Tafa, who returns to action on Saturday night at Toyota Center in Houston against fellow heavyweight hopeful Juan Adams, “because it was something so big in the MMA world, but also so local to Australia and New Zealand.

“The walk and that was all good — I wasn’t too bothered by it — and the reception was like, ‘Aw damn — these guys really like me.’”

Twelve fighters representing the Oceanic region stepped into the Octagon that night, with the middleweight title fight between Israel Adesanya and Robert Whittaker and the lightweight pairing between Brad Riddell and Jamie Mullarkey standing as the only two bouts where athletes from Australia or New Zealand faced off against one another. Outside of those contests, it was the folks from Down Under against Everyone, and as Tafa readied to kick off the main card against De Castro, the building was buzzing after four straight wins for the home team.

Order UFC 247 For Any Device

Unfortunately, the tides turned once the action hit pay-per-view, with Tafa being the first of three straight local representatives to land on the wrong side of the results. 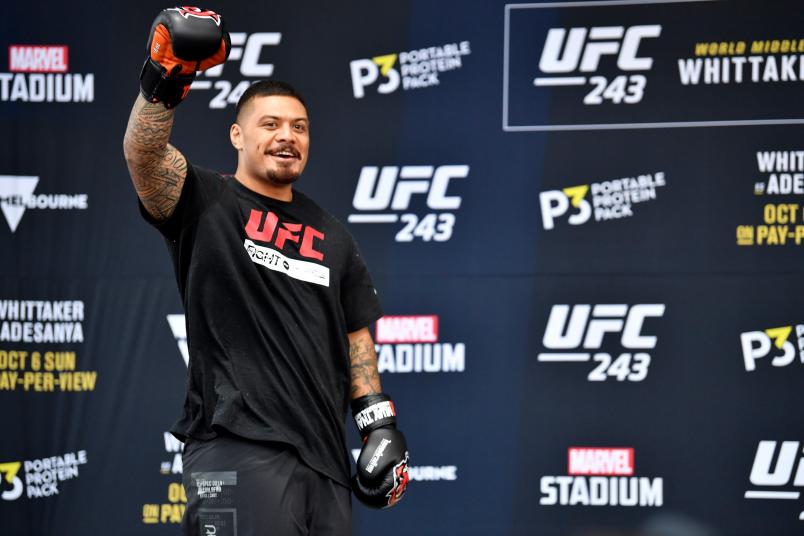 Despite landing a sharp right hand straight out of the gate and looking to be in control through the early moments of the contest, Tafa’s night came to an abrupt halt just over two minutes into the first round of his UFC career.

“I genuinely thought I had him on the back foot, a bit stunned,” said Tafa, who caught a right hand on the chin and crashed to the canvas in a heap, silencing the partisan crowd. “In the replays, I saw he closed his eyes and swung, and man, to get dropped by someone who closed his eyes is wretched and it was a reactive thing; it wasn’t something thought through.”

While the inclination might be to question whether the UFC newcomer was caught up in the moment and spurred into pressing forward more aggressively than normal by the raucous support of the masses in attendance, the reality is that the inexperienced Tafa made a slight miscalculation in his approach and simply got caught.

“If that fight was in a pub, I still would have gone in for the kill,” explained the Australian heavyweight, who registered a trio of stoppage victories in as many appearances before joining the UFC roster. “It wasn’t the event that impacted my approach — I genuinely thought that I stunned him a little bit and took off half a step too early.

“It was just my execution that caused me to get knocked out, but it wasn’t like I was panicking or something; I was controlling the fight,” he added. “I like to finish fights, I like to give the crowd what they’re looking for, especially from the heavyweights. It’s just a matter of staying disciplined.” 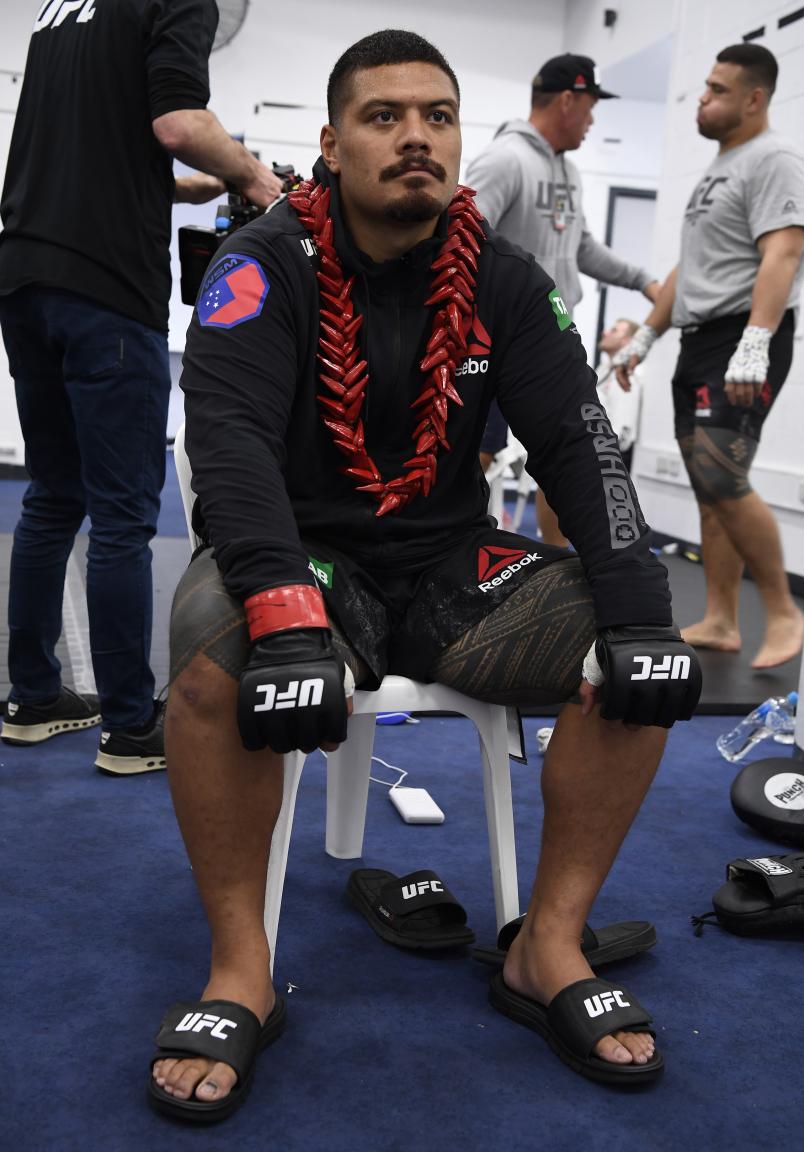 Although dropping his debut stung, literally and figuratively, the promotional newcomer has been able to find a bit of levity in the situation, thanks to some wise words from a long-time mentor.

“After the loss, Mark Hunt contacted me and said, ‘Well at least you’ve dealt with the hardest thing first,’” said Tafa, who accompanied the iconic knockout artist to the UFC cage in the past and was one of several next generation talents from the region to train alongside the famed knockout artist over the last several years. “It can’t get any worse; that’s exactly what Mark told me.

As he readies to make his second trip to the Octagon as part of this weekend’s pay-per-view main card in Houston, it’s that strong, supportive community standing in his corner that propels Tafa back into the cage.

“It means everything to me,” he said of walking to the cage with the Samoan flag draped over his shoulders and carrying on his family’s fighting tradition in the biggest mixed martial arts promotion in the world. “Having the responsibility and privilege to take that flag to the world stage is what I fight for. Samoans are really proud people and there are only like 160,000 of us, but we’re well represented around the world.

When you’re young, that’s all you want to do is represent your family and your country and I love it,” continued Tafa, whose grandfather was a national boxing champion while his younger brother, Junior, is a standout kickboxer with Glory. “I love being about to walk around and there are Islanders around that want to take photos and stuff. It just makes me think, ‘I need to represent these people on the world stage the best I can.’”