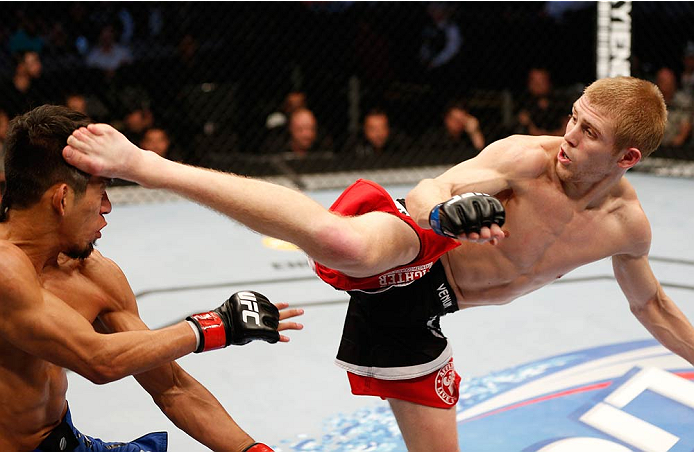 Between Urijah Faber and his sister Michaella being in the extended video and Justin Scoggins singing and bopping his way to the Octagon as it echoed through the American Airlines Center in Dallas at UFC 171, Pharrell’s infectious anthem “Happy” has some solid UFC cred.

For the unbeaten flyweight, the choice of song and energetic entrance wasn’t a spur of the moment, “Sure, why not?” decision. The song and the subsequent performance it inspired in the 22-year-old Scoggins on the way to the cage reflects how the emerging fighter feels about getting the opportunity to compete in front of packed houses on the biggest stage in the sport.

“We’re not just fighters – we’re also entertainers and we’re doing this because we love doing it,” explains Scoggins, who returns to action against Dustin Ortiz as part of the main card for Sunday’s Ultimate Fighter Season 18 Finale to wrap up International Fight Week in Las Vegas.

“If you love fighting, I feel like you should go out there and really enjoy the moment. Of course you’re going to be nervous because you’re about to fight another grown man, but you’ve got to enjoy what you’re doing. When you’re really passionate about what you’re doing, everybody sees that. It’s really nice to be able to do what I love and do it every day.

“So when I finally get to walk out to the cage, that’s the fun part,” he says with a laugh, recalling his sing-along entrance from three months earlier. “My job is training. My job is cutting weight. Luckily, I get to fight. For all these weeks of training, that’s my job – training and being in shape. Fighting is the good side of it.”

The enjoyment doesn’t stop for Scoggins once the cage door closes either, as the native of Greenville, South Carolina who now calls South Florida home has experienced nothing but success throughout his professional career, carrying a perfect 9-0 mark into this weekend’s meeting with Ortiz.

After making quick work of UFC newcomer Richie Vaculik in his promotional debut, Scoggins took a step up in competition last time out, sharing the cage with veteran Will Campuzano. It was the type of bout every rising prospect must endure during their climb – a fight with a tough out that helps fans and pundits get a better read on just how much potential the up-and-coming competitor possesses.

And Scoggins showed that his ceiling is through the roof, turning in three dominant rounds to earn the unanimous decision and maintain his unblemished record. Though it was a departure from the first-round stoppage wins the American Top Team representative earned in five of his first eight appearances, going the distance against the durable Campuzano was another accomplishment the confident young flyweight needed to get under his belt as he works towards his goal of becoming UFC champion.

“It always feels great to get a win, but not just getting a win – to go in there and being able to display my skills, doing the things that I know I’m capable of doing and doing it for three rounds,” offers Scoggins on his first outing of 2014. “It has given me further confidence going into my next fight to keep it going, keep it rolling – do this thing and get a world title.”

Confidence isn’t something he’s lacking either.

Following his debut win over Vaculik in Australia, Scoggins raised some eyebrows when he asserted that he was the best flyweight in the world. This wasn’t pre-fight bluster or a fighter pumped up on adrenaline taking shots at the opposition and boosting his self-esteem in the process – he said it in such a matter of fact manner that it was clear that Scoggins genuinely believes his statement to be factually correct.

Given the opportunity to walk back his comments prior to making his sophomore appearance in the Octagon against Campuzano, Scoggins stood firm and now that he’s readying to make the walk to the UFC cage for a third time, the kid they call “Tank” has every intention of continuing his quest to prove what he said is true by collecting a win over Ortiz and taking another step forward in the flyweight title chase.

“No disrespect to anybody, but I see each opponent as a stepping stone because I know where I’m headed and what’s in my future,” says Scoggins, echoing similar comments he made prior to his appearance at UFC 171. “That’s something that no one else has – I’ve wanted this longer than anybody. There’s nobody in the division that’s wanted this longer than me, so that’s what these guys are - stepping stones to my dream.

“Dustin, he’s tough,” he continues. “I’ve watched the guy fight and followed his career from the time he was an early pro because he’s from Tennessee, so I’d known of him beforehand because we’re kind of from the same area. I’ve always known he was a tough guy, and there’s always been talk of `Oh, you should fight Dustin Ortiz!’ Luckily we finally get to do it.

“We get to go in there, put on a good show for the fans and at the end of the night I’m still the best. I’m the best in this sport, I’m the best at what I do and this is going to be another part of my story.”

Though he’s always been confident in his skills, part of what has cemented Scoggins’ belief in his abilities even future has been training with the tremendous ensemble at American Top Team in Coconut Creek, Florida. Boasting one of the deepest and most talented rosters in the sport and an assortment of highly respected coaches, hitting the mats every day with the likes of Dustin Poirier, Thiago Alves, and Hector Lombard as Ricardo Liborio, Conan Silveira and Kami Barzini look on has only heightened his belief that championship gold is in his future.

“Whoever you put yourself around, whoever you surround yourself with, you’re going to become like those people,” he posits. “It’s inevitable, and at American Top Team there are nothing but good fighters and good people and everyone is eager to learn. That reflects off everybody. Everybody is smiling, trying to learn.

“The environment is completely different from any gym in the world and that’s the reason we’re having such great success right now and why I’m having success. It’s because it’s different than anywhere else. It’s a really good family environment. Everybody is tight and everybody is on the same page. When a lot of people get the same goal in mind, everybody is going to get really good, really fast. It’s almost scary how fast it can happen.”

One particular teammate that has helped Scoggins prepare for Sunday’s meeting with Ortiz is fellow flyweight contender Brad Pickett, who makes his second appearance in the 125-pound ranks later in July when he faces “Uncle Creepy” Ian McCall on the main card of the UFC’s return to Dublin.

A veteran of more than 30 fights spread between the United Kingdom, the WEC and the UFC, Scoggins says the 35-year-old Londoner has helped him make serious gains since the last time he graced the Octagon and the always-amped up competitor is bursting at the seams waiting for this weekend to finally arrive.

“Brad Pickett has really been spending a lot of extra time with me lately. It’s really cool because I’ve always looked up to the guy – he’s one of the first fighters I watched in the WEC and the UFC, so having him give me advice is great.

”And he’s not talking down to me like, `You’re a young guy, you don’t know anything,’” he adds, laughing as he offers the clarification. “We’re sitting there troubleshooting, spitballing stuff back and forth. He’s already been where I’m going, so I really listen to what he says and I take everything he says to heart.

“I’ve improved by leaps and bounds, especially in this camp. I can’t wait to fight. I’m burning up to fight because I’ve made so many adjustments and added so many new little things to my game that are going to grow it exponentially and I can’t wait to show the fans and (the UFC brass).”

In an ironic twist for someone who jovially juked his way to the Octagon to “Happy” just three months ago, the one thing Scoggins can point to specifically that he’s improved in his most recent training camp is being less of a nice guy.

“I’ve become a better all-around fighter because I’ve gotten a little meaner. It’s not that I’m more aggressive or acting stupid by throwing hard punches all the time, but I’m more relentless than I’ve been. You’ve got to have a little of that bad guy mentality. I don’t want to have to be one of those guys that needs to slap myself before a fight or turn into something I’m not.

“I’m going to be who I am, but that’s a gritty little son of a bitch. I’ve always been like that, since I was a little kid. They started calling me “Tank” when I was like five years old because I’ve always been a gritty, mean little guy and I’ve really started showing that in my style lately.”

And he has every intention of showing it even more when he hits the Octagon this weekend in Las Vegas opposite Ortiz.

“I need to start messing people up. I need to go in there and show everybody what I’m really about, that I’m really ready for this. This isn’t a game for me. I don’t want to be just another guy on the roster.

“I didn’t come into the UFC to sit around for a while and build up my record – I came here to be a champion, hold the title for as long as I want to and do great things, establish a real legacy for myself.”