After making a splash in his UFC debut, Justin Jaynes knew the real tests in the UFC were on the way.
By Thomas Gerbasi, on Twitter: @TGerbasi • Nov. 30, 2020

The year was 2007 and the 18-year-old from Richmond, Michigan (population 5,735) was determined that he found his path in life. It wasn’t the usual path in Richmond, where school was usually followed by a job in whatever trade your parents and grandparents had.

“I had 47 amateur fights,” he said. “In 2007, MMA was just starting in Michigan. There weren't really any clubs around, so they put up a boxing ring, and you'd just sign up. You go into the bar and say ‘Hey, I want to fight.’ You'd step on the scale and they'll get someone within 10 pounds of you. There was no sanctioning, no regulation, and if you could find a show, you could fight every weekend.”

Or even more. And if there was a fight within driving distance, Jaynes would find it, whether it was four-man or eight-man tournaments up north, or times when he would fight Saturday-Thursday-Saturday.

“I just loved competing that much,” he said. “I think I would even have more amateur fights, but college wrestling interfered. It's been a long road from fighting in bars to now fighting in the UFC.” 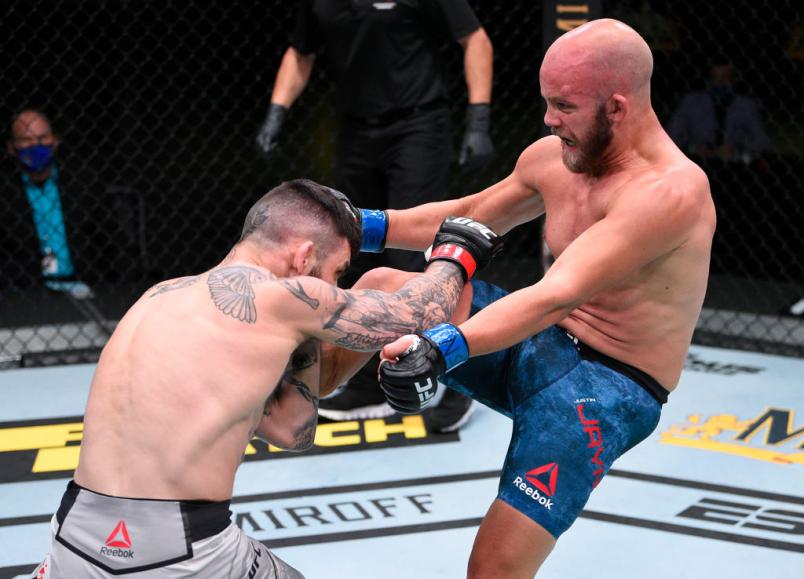 It has been. That doesn’t mean his dad, Donald, and mom, Julie, have stopped worrying.

“I remember calling my dad when I booked my first fight, and I told him I want to be a cagefighter,” Jaynes recalls. “He kind of hesitated for a second and he said, ‘All right, I'll support you.’ My mom, and I'm not taking a shot at her by any means, but she hated the idea.”

Justin, all moms hate the idea.

He laughs, recalling the first time his mother went to one of his fights. Jaynes was on a six-fight winning streak and making some noise heading into a bout against Scott Bickerstaff that was a big deal on the local scene.

You can imagine what happened next.

“Scott clinches me and knees me right in the head, drops me, gashes my eye, blood everywhere,” said Jaynes. “It was not a good time for her debut watching her son.” 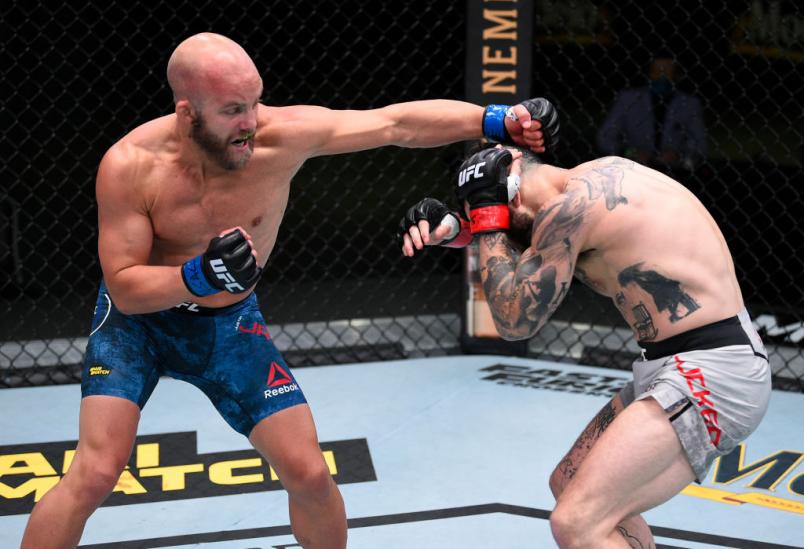 RELATED: Montana De La Rosa Is Coming Into Her Own As A Fighter | UFC Vegas 16 Fight By Fight Preview

Thirteen years later, it’s safe to say that Jaynes has done all right for himself. He’s 16-5 as a pro, entering his third UFC fight this Saturday against Gabriel Benitez, and two of his biggest fans are the ones who brought him into this world in 1989.

“Between her (mom) and my dad, they're my two biggest supporters,” he said. “Once she understood where my head was and how focused I was and how determined I was to achieve this goal, she jumped on the bandwagon relatively quick.”

It wasn’t a quick road to the UFC, though.

“Right as I was about to graduate high school and I told my dad (about becoming a fighter), my goal was to be in the UFC by the time I was 25 years old. A little late, but better late than never, right?”

Absolutely. But the journey to make it to the biggest promotion in MMA isn’t really calculated by months or years; it’s the bumps, bruises and setbacks along the way that are remembered the most. Jaynes hasn’t forgotten a second of it. And what would have made most quit only pushed him further. And it had nothing to do with being stubborn or having that Michigan pride in his DNA. Well, maybe there was a little of that, but what really pushed Jaynes was his son, Ben.

“He's influenced me probably more than I'll be able to influence him,” Jaynes said of his son, who turns 12 in January. “I've been in some dark holes after a loss where it's like, 'F**k, how am I gonna come out of this? How am I gonna get to the UFC after taking this loss after a five-fight win streak?'”

Jaynes searches for the right words to describe how he felt at that point in 2017, when he saw his win streak collapse over the course of a three-round loss to Tommy Aaron in Long Beach, California. He had already gave up everything to move to Las Vegas and train, hoping that the new digs would get him where he needed to go. But one loss on the regional circuit means a few steps back when it comes to getting that UFC call. He could have packed his bags and gone home. He had an uncle back in Michigan who had a job for him that would provide a stable income and a good living. But Jaynes couldn’t pull the trigger; he still had that fight in him. 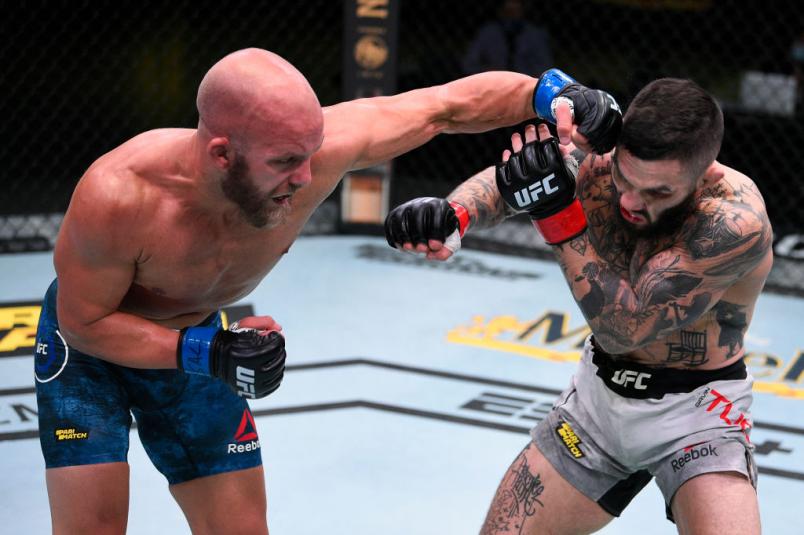 “I was a coward to go back home and give up,” Jaynes continues. “I couldn't face my son and him knowing, especially as he gets older, that I failed. And that's been my motivation these last ten years. My uncle owns a very successful company in Michigan, he's offered me jobs. ‘Anytime you want to move home, there's a job for you.’ And I haven't had the guts to make the move because I can't face him (Ben) and tell him that I went for it, but I failed. I didn't have the guts to do that. What would Ben think when he's an adult? ‘Oh, he went to Vegas for 10 years.’ For all he knows, I partied my ass off for 10 years and abandoned him, in a sense. That obviously isn't the case, and now that I've finally put my foot in the door and had some success in the UFC, he can see that and he can know that. Although we have a very tight relationship, I'm not around all the time and when he grows up, I want him to know why.”

Ben is the why. And after a 41-second knockout win over Frank Camacho in his UFC debut in June, a back-and-forth battle with Gavin Tucker in August, and this weekend’s matchup with Benitez, Ben, Donald and Julie can see that it was all worth it. Just like Justin predicted it back when he was 18. Yeah, it is better later than never.

“My mom told me I don't care what you do in your life, just make sure you're the best at it or be the best you can be,” said Jaynes. “If you want to be a dishwasher for the rest of your life, you better be the best dishwasher there is in the world. And that's what I want to instill in him (Ben). If he wants to be an MMA fighter, this is not an easy lifestyle. This is not for everyone. You could be jogging down the street, roll your ankle and your career is over. So this lifestyle can change. I would give him the ins and outs of it, but if he was bound and determined that this is what he wanted to do, I'm gonna support him. And that's in whatever he wants to do.”