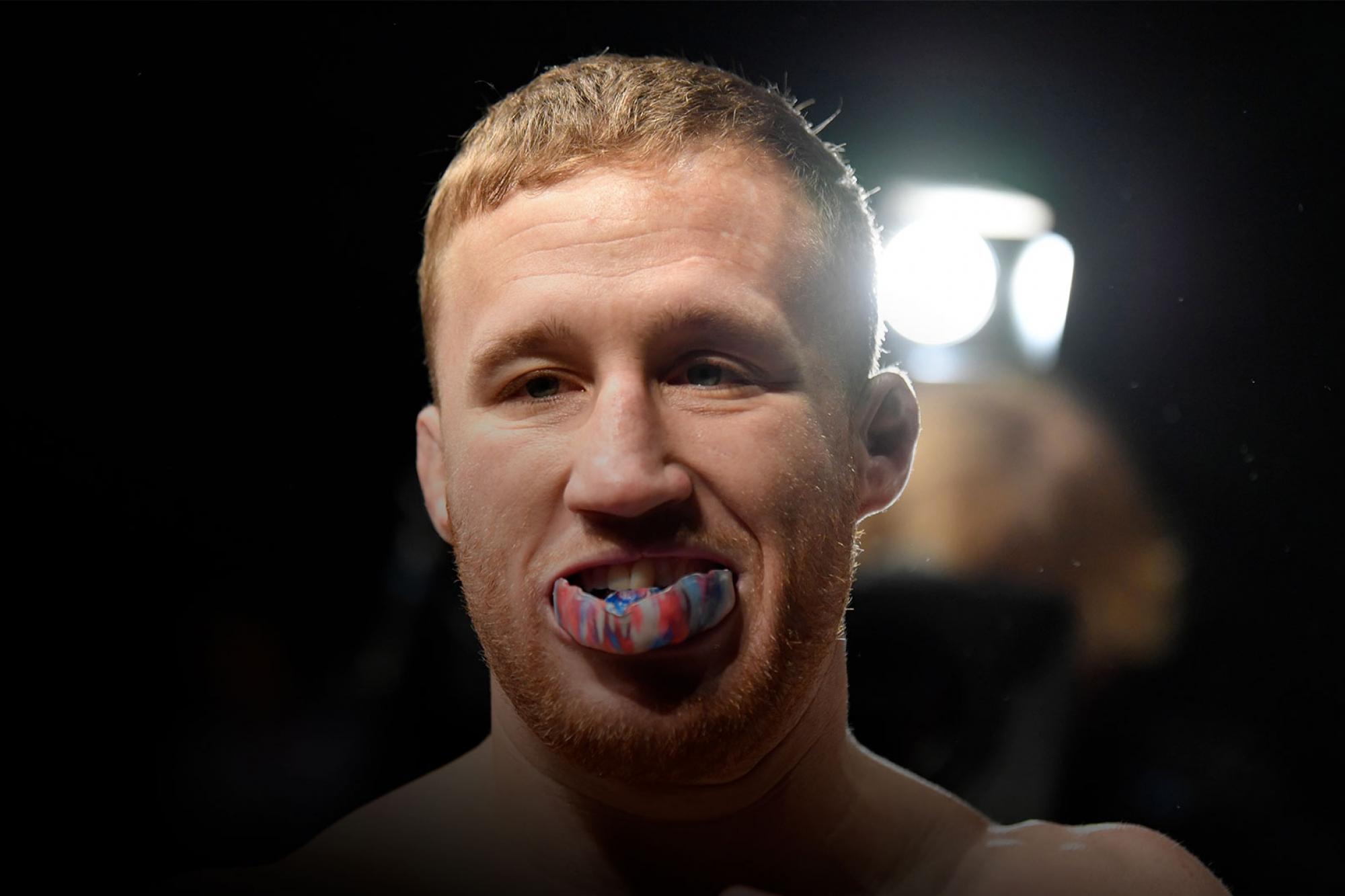 Justin Gaethje discusses how he plans to dethrone Khabib Nurmagomedov at UFC 254 on Saturday
By Thomas Gerbasi, on Twitter: @TGerbasi • Oct. 22, 2020

When talking about his UFC 254 main event bout against Khabib Nurmagomedov, Justin Gaethje is quick to point out that, “Fighting and wrestling are very different.”

It’s a reality that he hopes to drill into the head of the UFC lightweight champion early and often in their five-round championship bout, and the consensus among fight fans and pundits is that for the Arizonan to win, he needs to make it a fight and not a grappling match, even though Nurmagomedov’s style of grappling is as punishing as that art gets.

But how do you stop the 28-0 juggernaut from Dagestan?

“We are absolutely more focused on grappling and stopping the grappling,” said Gaethje. “Causing scrambles, getting up if I get taken down. But ultimately, it’s causing damage in between those instances. I need to cause damage. I’ve got dense bones, and when I hit people, it tends to hurt ‘em. So I need to kick him, I need to hit him, and I need to make it ugly.”

Gaethje may call it ugly, but oh, what a beautiful picture he paints on fight night.

Owner of a 22-2 pro record, the 31-year-old made his mark on the regional circuit thanks to a 10-0 run in the World Series of Fighting promotion that saw him win their lightweight title and successfully defend it five times.

But it’s been in the UFC that Gaethje went from favorite of the hardcore to favorite of everyone who calls themselves an MMA fan.

“I’m unlike any fighter that’s ever stepped into the Octagon,” he said. “Carnage is what I’m looking for. It’s stupid to say, but personal health is not…when I step in there, I constantly pray for myself and my opponent to walk out of there without any chronic injuries. But I’m trying to inflict major damage, major carnage, major pain at all times.”

That intent has led him to a 5-2 UFC record. In those seven fights, Gaethje has garnered nine bonuses. That’s at least one extra check every time he’s made the walk.

“That will never and is impossible to match,” he said. “And that’s purely because of the way that I fight. My fighting style has changed, but my ability and my thirst to inflict damage will never change and will never go away. I’m the most competitive person you’ll ever meet.”

It’s hard to describe it better than that, but if you want to give it a shot, you can say that the biggest compliment you can pay the aptly monikered “Highlight” is that he’s never been in a fight that made you want to switch the channel, and that even in the fights he lost, his performance and effort were so memorable that the final outcome didn’t even matter.

Yeah, Gaethje may be unlike any fighter that’s ever stepped into the Octagon. But now he’s looking to defeat someone aiming to be the best who ever competed in the sport in Nurmagomedov. That’s not going to be easy. Gaethje knows it. And he likes it.

There was some difference earlier this year when Gaethje, who previously said that he wouldn’t take short-notice fights, accepted one with Tony Ferguson when Nurmagomedov pulled out of the UFC 249 main event due to COVID-19 imposed travel restrictions.

Ferguson, on a 12-fight winning streak, was expected to be the only one to seriously test – and possibly beat - Nurmagomedov. Gaethje was concerned, but not too concerned that he would turn down a career-changing offer.

“I was super reserved because I had never taken a short notice fight,” he said. “It was Tony Ferguson, who was a cardio machine, and the only way I lose is to get tired. But I got a say in my destiny, which is all I ask for. It was a lifelong good experience because it was something special and had major implications on my future.”

That future was changed when Gaethje put on disciplined and career-best effort in halting Ferguson in the fifth round. The victory earned him the interim UFC lightweight title and a ticket to fight Nurmagomedov that he cashes in this Saturday.

It’s the biggest fight of 2020, one that the world will be watching. Will Gaethje catch lightning in a bottle and upset the wrecking machine that has never been beaten or does the Arizonan just become number 29 on a list Nurmagomedov has been writing with each thudding ground strike on battered opponents?

Gaethje isn’t one for predictions. But he will say one thing.

“I’m fueled by pure competition and I’ll be damned if I quit. Ever. To anybody.”

That could intimidate anyone. But Nurmagomedov won’t blink. And neither will Gaethje.

“We walk into those scenarios with no fear,” Gaethje said. “It has nothing to do with violence; it has to do with winning.”