The most exciting athlete on the roster is on the cusp of evolving from a "technical brawler" to a UFC champion.
By Thomas Gerbasi, on Twitter @tgerbasi • May. 7, 2020

No matter how many people are in the arena or how loud that crowd is, the moments before battle are quiet ones for Justin Gaethje.

“I’m praying to God to protect me and my opponent from any serious injury,” he said. “I pray for courage and I pray for strength. Outside of that, I don’t care what happens. And I think that’s what makes me so dangerous.”

On Saturday night, the 31-year-old Arizona native gets to be dangerous again when he faces a like-minded foe in Tony Ferguson. The UFC 249 main event for the interim UFC lightweight title will be fought in front of an empty house in Jacksonville due to the COVID-19 pandemic, but all that means is that the world will be watching, all eyes on him and his opponent, just the way he likes it.

That’s a long way from the days when the unbeaten Gaethje walked into the gym on sparring day, and when told to put on headgear, asked his soon to be new coach, Trevor Wittman, “Why do I gotta wear a helmet, nobody else is wearing a helmet?”

He laughs about it now, but back then, fighting was something to do following his college wrestling career that he enjoyed, and not necessarily his life’s work. And though Gaethje was already 4-0 as a pro in MMA, he didn’t know what was ahead for him.

“I’m from a super small town and I was a really good wrestler,” said the Safford native. “Nobody wants to fight the good wrestler in a small town. So I really had no idea if I could fight. I knew I was a competitor; I knew I had wrestled since I was four years old to 22 years old and I had a ton of hard work built up. I was confident, but I was extremely green.”

Wittman helped mold Gaethje into a true pro. The rest was up to the young man who most certainly deserves the nickname “The Highlight.”

“I didn’t know how to throw a punch, throw a kick,” Gaethje said. “I knew how to throw a ball, though. I’m a pitcher. I could punt the ball real well, I was a punter and a kicker. And that’s all the same as punching and kicking. My athletic ability that I had, I brought to him (Wittman) and he honed it. It was a perfect match.”

Over the next several years, Gaethje’s stock rose as he learned and then honed his craft. In 2014, he won the World Series of Fighting lightweight title, successfully defended it five times, then got the call to the UFC in 2017. In less than two rounds, his 17-0 record turned to 18-0 and he picked up a pair of bonuses in the process as he halted Michael Johnson. After the stunning Octagon debut, he called out the 155-pound division. Then dropped his next two fights.

“I really had no expectations when I started this. It was one at a time and then, all of a sudden, I was fighting Eddie Alvarez on a pay-per-view, taking my first loss,” said Gaethje. “I beat Michael Johnson, asked for my equal, and found two of them. Then I was able to go back to the drawing board and listen to my coach.”

The losses to Alvarez and Dustin Poirier forced his wallet and perfect record to take a hit, but his reputation as the sport’s premier action hero never faltered. In fact, if Gaethje never won another fight after April 2018, he likely would still be getting high-profile matchups simply because he’s always in compelling fights.

That’s not enough for Gaethje, even if he does say the possibility of losing doesn’t affect him.

“I’m not scared to lose,” he said. “I know my parents will love me and be proud of me. And the people from Safford, Arizona will not care one bit.”

Gaethje is a competitor, though, and as such, he wants to one day wear a UFC championship belt. That opportunity arrives on Saturday, even if it took three straight knockout wins over James Vick, Edson Barboza and Donald Cerrone, along with a global pandemic that scrapped champion Khabib Nurmagomedov from his bout against Ferguson, to get there.

And when the highly anticipated Nurmagomedov-Ferguson matchup hit the skids once again, is it any wonder that the one who stepped in was Gaethje? That’s his M.O. – not the late notice assignment, but for his willingness to take the chances most won’t. 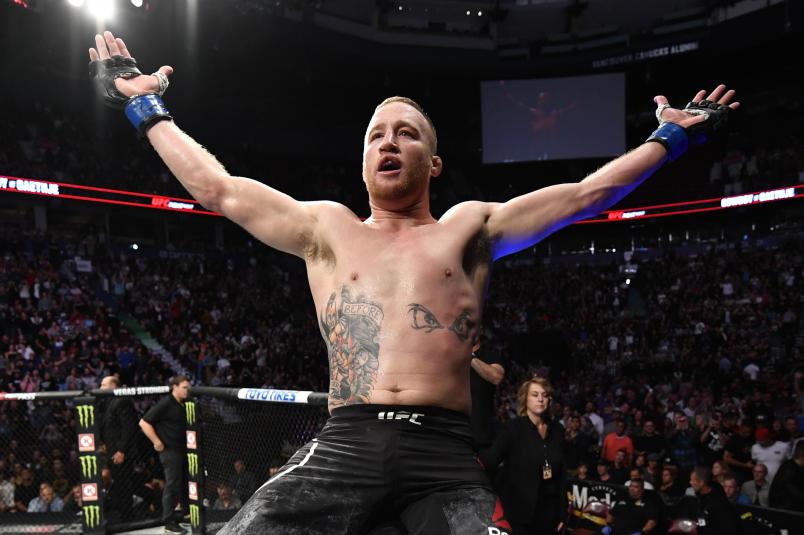 “They fought for pride, they fought for glory, heroes live forever, legends never die,” he says, referring back to the old school attitude of all combat sports. “That’s an attitude and that’s the attitude I live by. These guys are scared to lose because they think it’s going to diminish who they are or what they represent. But it’s all about effort. Humans recognize effort and I give max effort. People appreciate that.”

They also appreciate that while Alvarez and Poirier beat him, the equal Gaethje has been looking for might be right in front of him.

“I appreciate the term ‘technical brawler,’ but the ‘technical’ is all capital,” he said. “When we’re dealing with fractions of seconds, it’s so hard to see what I’m doing in there, but one day, people are going to understand what I’m doing. It’s controlled chaos and it’s hard to live in that space. I believe Tony Ferguson is the man that lives in that dark space just as much as me.”

Yeah, Nurmagomedov and Ferguson was going to be fun, but Gaethje and Ferguson may take that fun to a whole new level.

“I’m disappointed that Khabib and Tony isn’t happening,” said Gaethje. “But this will be a fight for the ages. Someone is going to get finished…in probably less than ten minutes. Me or him."