"I fight aggressively and with my heart, and the fans like that. They
don’t want to see people in there trying to squeak out a victory." - Justin Edwards 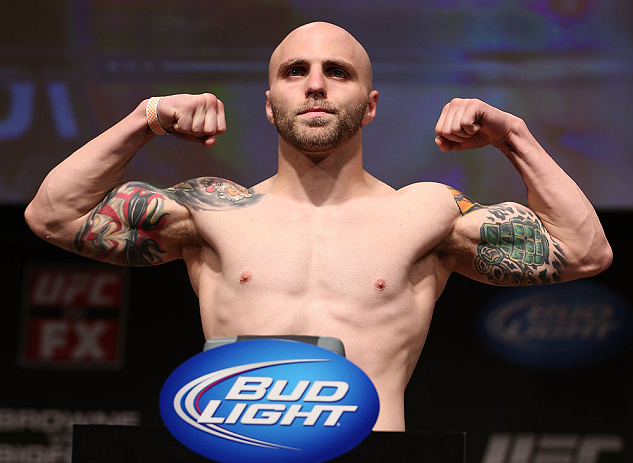 Returning to the Octagon this Wednesday for the first time since his October 2012 win over Josh Neer, Justin Edwards minces no words when it comes to his fighting philosophy as he approaches his UFC Fight Night bout against newcomer Brandon Thatch.

“If it was up to me, I’d turn it into a pissing contest every time,” he laughs. “If I had my choice, I’d go out and try to grapple with (Gunnar) Nelson and strike with (Brandon) Thatch, but I have good trainers and good management, and they come up with the game plans, and I’m not allowed to have too much input. (Laughs) But if it turns into a standup battle, I’m ready for it. I think my striking’s underrated, and if I get a chance to prove it in Indianapolis, I will.”

The topic comes up because Thatch arrives in the UFC with six of his nine wins coming by knockout, with the other three ending via submission. So if you’re worrying about his striking, he may submit you, and vice versa, a la Donald Cerrone. But Edwards is unconcerned about what’s ahead of him, whether on the feet or the mat.

“I feel so comfortable with my standup that I don’t see it as a terrible threat,” he said. “I know he (Thatch) is a good striker, but I think I have great defense and my striking’s good as well. If it was up to me, I’d probably have a kickboxing match with him just to prove who’s tougher, but this is MMA, and I’m just gonna go out there and I’m gonna do what I have to do to win. Even though he’s a great striker, we can adjust to that and it won’t be any problem.”

This attitude makes for exciting fights, and Edwards has had his share, but when he talks about listening to his coaches and following a game plan, that doesn’t mean he’s going to stink the place out trying to outpoint his foe. For a prime example, look at the Neer fight. He didn’t stand and trade with the veteran; instead, he used the Iowan’s aggression against me and submitted him in 45 seconds. Exciting, effective, and he listened to his coaches, though one of those coaches – UFC and Strikeforce veteran Jorge Gurgel – isn’t exactly someone who should be criticizing anyone for deviating from a game plan.

“He’ll be the first one to tell you, do what I say, not what I do,” laughs Edwards. “He kind of rags on his whole career all the time. He’ll say ‘look what happened to me; don’t be me.’ He says he gets his stubbornness from Brazil.”

A Brazilian Jiu-Jitsu black belt, Gurgel earned a well-deserved reputation for tossing game plans and his ground game out the window in order to put on crowd-pleasing standup battles. So if anyone knows about Edwards’ dilemma, it’s Gurgel. And as “Fast Eddy” returns from an injury-induced layoff, the 30-year-old is learning to slow down and look at the big picture.

“At the beginning of my career, (UFC matchmaker) Joe Silva would call up my management with a fight, it would be four days after my fight, and I’d say set it up,” he said. “I would take it, and I wasn’t really thinking about anything careerwise. I just wanted to prove that I belonged in the UFC.”

On season 13 of The Ultimate Fighter, a strong showing against eventual season winner Tony Ferguson proved that he was ready, but losing by knockout in that bout kept him from being brought back for the series’ Wild Card fight. He went on to fight three times in the second half of 2011, going 1-2, but the win against Neer put him back in business, only to see that momentum fall by the wayside when he was injured and forced out of a February match with unbeaten grappling ace Gunnar Nelson.

“I think that fight (with Neer) might have opened a few eyes, and though I didn’t capitalize on the momentum after it, I still feel that if I string together a bunch of wins, you can’t really deny people if they’re going in there and making progress and winning,” said Edwards. “I would have loved to get Nelson right after that, finish him, and keep the ball rolling. But everybody starts at the bottom, and you just want to work your way up. Some people are too eager and don’t think about it, but I think it (the layoff) could be a good thing because I’m actually a better fighter now. I’m smarter about my training, whereas I may not have been before and been just too bullheaded.

“A lot of it was my eagerness,” he continues. “I was injured in almost all my UFC fights, I was injured on The Ultimate Fighter show, and I really didn’t say anything because I didn’t want them to pull me out of the fights. I learned from that and I don’t have to try to be tough; they (his team) just want me to go in there and perform and win, and so now I’ll just do what I have to do to be the best that I can be when I’m in the cage.”

So is Wednesday’s fight a reintroduction to Justin Edwards or a reminder?

“It’s a little reminder,” he said. “All my fights have been exciting and I get a lot of praise for that. All my fights have been up for Fight of the Night, and I don’t fight smart (Laughs); I fight aggressively and with my heart, and the fans like that. They don’t want to see people in there trying to squeak out a victory; they want to see someone that’s gonna try and finish the whole time, and that’s what I’m gonna do.”