"I think this could be the best fight ever. It was so intense and just a non-stop turning of the tides. It was a great, great story – the stuff that films are made of." - Justin Bua on Henderson-Shogun I 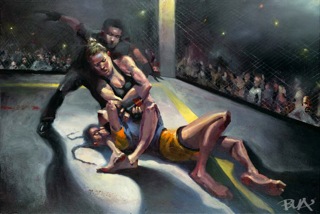 How big of an MMA fan is artist Justin BUA?

Earlier this year, the man that made his name depicting the world of hip hop and urban life in exaggerated portraits of archetypal figures and famous performers alike turned his focus on the sport, creating a series of works that ran as part of the “Art of Fighting” exhibit during International Fight Week.

Even though he’s currently busy at work on his new television series Street Art Throwdown, which debuts in February on Oxygen, and joining the broadcast ranks as the host of The BUA Show on Faction (Sirius XM Channel 41), the self-described “fanboy” who was picking up Pancrase and K-1 tapes even before UFC 1 took some time out of his schedule to fill us in on what fights register as mixed martial arts masterpieces for him.

These are Justin Bua’s Top 5 Fights.

That’s such a crazy fight! I was always a Nick Diaz fan, but that was one of those fights where Nick showed why he’s a fighter’s fighter. If you talk to any real fighter – any seasoned MMA guy – I think they’re going to tell you the same thing: they all love Nick Diaz.

There is something very poetic about Nick and that Paul Daley fight was consummate Nick Diaz. It was the quintessential moment where Nick gets dropped but he keeps coming forward. He’s not changing his game plan and he doesn’t get gun shy when he gets hit. He’s so used to it (getting hit) that it just doesn’t faze him and it’s from another part of his soul. It’s a hard thing to articulate, but you get a sense that deep within him is the spirit of the warrior.

Paul Daley on the other hand, you could read him. “I just rocked him!” He comes in and then as soon as Nick is up, “Oh s***!” where Nick is never going to have that “Oh s***!” moment. I feel like Paul Daley was defeated by Nick getting up from that shot.

There’s something just so great about Nick. There’s a uniqueness to him and this was probably the greatest, most entertaining round in history.

Cerrone was just out of his mind, “I don’t know how to get rid of this guy.” His whole game plan was shook – the elbows, the knees, the kicks. Think about the advantage Cerrone had in the kicks compared to Nate, but Nate was just throwing so many punches, throwing something like 200 punches a round or something ridiculous.

It was one of those fights where Cerrone has all the tools. Look at him in his last fight (against Eddie Alvarez) – amazing, right? But Nate disrupted his whole game plan. “Cowboy” has so many tools – he’s got those beautiful kicks, the beautiful knees, the beautiful elbows, he’s got a great ground game, a great sprawl – he’s a really complete, all-around fighter. Dude is seriously on another level, and the fact that Nate took him out of his game plan and is talking trash to him the whole time is genius.

He got in Cerrone’s head and (messed) him up. That’s why the Diaz Brothers are so great and two of my favorite fighters in the world – they’re able to trash talk and it can really mess you up if you’re not prepared for it. That’s Jedi mind trick-type stuff and that’s what those dudes are – they’ll get in your head and ruin you.

This was such an iconic moment that I painted it! (laughs) It was just one of those fights where – it was the first time we ever saw that front kick that “Steven Seagal taught him” – which is complete bulls**t!

That kick changed the game. Anderson was really able to show how elegant a fighter he was. It might have been the first time we realized that “this guy’s not just any fighter – he’s really special.” He’s Bruce Lee. He’s got that otherworldly, magical quality about him where he’s able to beat you in any way, like coming right down the middle with that perfect kick that just crumbles a substantial opponent. Not somebody that just sucks – somebody that is great.

It was a perfect kick. When I painted it, I had to really study the fight and the movement and it was just really poetic and special and showcased the fact that Anderson is just that guy – the Greatest Fighter of All-Time – and that was proof why.

What do you say about Dan Henderson? The guy is an absolute Greek, mythological character – somebody you might see in Game of Thrones, somebody that probably existed during the Roman or Greek Empire. He’s one of those guys that has ice in his veins and doesn’t get rattled. He’s always even. He’s been doing it from such a young age that he doesn’t know any different.

And then Shogun has clearly had an up and down career and this was one of the greatest performances of his career. It was one of those moments where everybody was off the couch because here comes Henderson looking like he’s going to finish him and then now here comes Shogun fighting back.

They both showed that warrior spirit where it was that “you’re going to have to kill me” mentality – neither one of them was going to quit and you felt it in that fight. It brought you back to the days of the Roman Coliseum where the doors closed and one person was going to walk out alive. It was bloody like that too! Somebody was going to have to not get off the canvas.

I think this could be the best fight ever. It was so intense and just a non-stop turning of the tides. It was a great, great story – the stuff that films are made of.

I was watching from the first fight (at UFC 1) – I used to call Art Davie and pretend to be a journalist to pick his brain for information.

That was the first time most people saw a triangle choke and it was one of those old school fights where you’re watching one guy that is so much more powerful, so much more raw and big and then you’ve got this little, skinny Brazilian Jiu-Jitsu spider on his back.

Like everyone else, my Pay-Per-View went out at the end of that fight and there was no YouTube or any of that stuff, so I don’t know how, but I wound up seeing the finish somehow, somewhere and it was amazing, so that has to be on my list.

Even though I never saw the finish of the fight, it was a changing moment in the game when people hadn’t figured out Jiu-Jitsu quite yet. It was back in the dominant days of Brazilian Jiu-Jitsu and the beginning of everybody getting informed about the different aspects of mixed martial arts.