Just A Normal Fight For Smith?

"Maybe I’m too close to the forest to see the trees right now, and that might be different once I get to Vegas, but I feel pretty normal for the most part. It seems like a normal fight.”
By Thomas Gerbasi • Feb. 28, 2019

It’s before 8am on Monday morning in New York City. For a kid from Nebraska days before the biggest fight of his life, there’s probably nothing more unnatural. But Anthony Smith is embracing it all with a calm that is both impressive and surprising.

On Saturday, he faces Jon Jones for the UFC light heavyweight title in the main event of UFC 235 in Las Vegas. And he’s not blinking.

“I’m gonna be a hundred percent honest with you,” said Smith between his UFC 235 media obligations in the Big Apple. “It feels pretty normal. As crazy as that sounds with all the media and the attention it’s getting, I think getting off social media so closely really made a big difference. I pulled myself away from Twitter and Instagram – I do my posting and stuff, but I don’t dig too deep into it, so maybe I’m too close to the forest to see the trees right now, and that might be different once I get to Vegas, but I feel pretty normal for the most part. It seems like a normal fight.”

It’s anything but a normal fight for “Lionheart.” At this time last year, Smith was coming off a loss to Thiago Santos in Belem, Brazil, and he was making his decision to move from middleweight to light heavyweight final. That would usually mean a long road to the top of a new division, but after successive finishes of Rashad Evans, “Shogun” Rua and Volkan Oezdemir, Smith found himself in a title fight with Jones, who regained the 205-pound crown in December with a stoppage of Alexander Gustafsson.

And yeah, Smith is the underdog. But with a mix of a great story, a refreshing attitude, and the reality that he has everything to gain against the odds this weekend, the 30-year-old has plenty of people rooting for him to win.

“I feel like people are really hoping,” Smith said. “I’m not sure how many believers are out there, but I don’t really need people to believe; that’s for me and my team and my family to do. But I do feel that from the beginning, when this first was announced, there was a bunch of people wondering what the hell I was doing and what was going on here. And now I’m feeling a lot of people are really connected to me right now. And it’s not just the underdog story, but the regular guy that goes and does something super extraordinary but keeps a level head and doesn’t let it get to him. I think that people can relate to that. And as far as athletes go, I think that’s how blue collar America and regular people would love to see it happen and I think that’s how they want to see athletes act. Just be a regular person. Just because you have an extraordinary job doesn’t mean you have to be an a**hole. And I think the way I’ve carried myself has won a lot of people over because I’m not shook and I’m not letting the moment get to me. And you can tell by talking to me that I’m not nervous and I’m not making this bigger than it actually is, and I don’t give a s**t about Jon Jones. And I think that people are starting to realize that this isn’t me just saying it to the media. I truly believe it and I mean everything I say.”

Believing is one thing. Can Smith pull off the upset on Saturday? Well, if his attitude toward the actual fight is any indication, it’s going to be an interesting one, because Smith is showing up to T-Mobile Arena with the intention of getting into a fistfight and not necessarily a mixed martial arts sporting competition.

“Jon beats everybody because they sit back and they watch him fight,” Smith said. “And they wait for him to do something and they hope that they have an answer for it. And my brain just doesn’t operate like that. I’m gonna bring the fight to him and I’m not a hundred percent sure if he knows that yet, and I think that he’s trying to figure it out. I’m not afraid to look foolish and I’m going to bring the fight to Jon and I think that’s one of the few things that Jon is not good at. He’s absolutely a competitor, he’s absolutely a great athlete, and he says that he’s a martial artist. But no one makes Jon Jones fight, and he doesn’t like to. He doesn’t have that dog in him and I think because of the way I’m carrying myself, people are realizing and Jon is realizing that I’m coming and there’s nothing he’s gonna do about that. It doesn’t matter what he says, it doesn’t matter how big he pumps his chest at the weigh-ins, it doesn’t matter. I’m coming across that cage.” 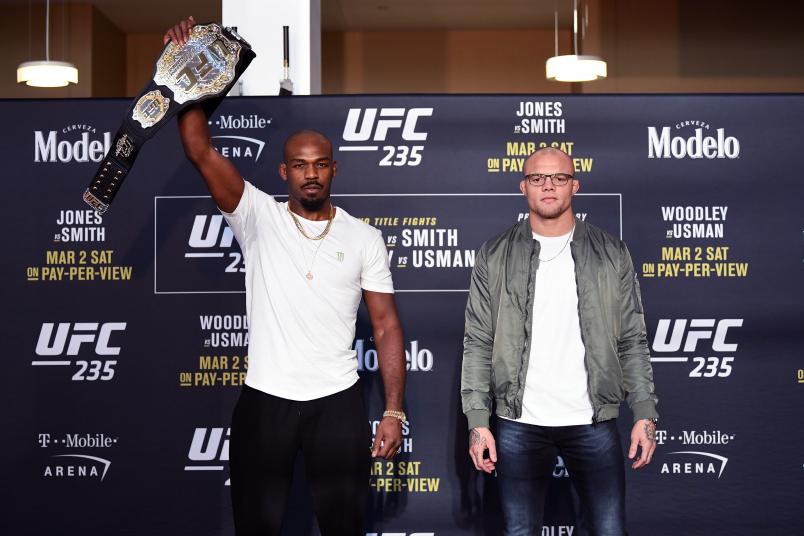 If we’re reading into word choice again, notice that Smith says that Jones is a great athlete, but not a great fighter. I wonder if this was a subliminal slip. It wasn’t. It was an intentional choice.

“It’s because I don’t think he is,” said Smith. “And I don’t mean that with any disrespect, trying to poke at him. The one time we’ve seen Jon in a real fight, he almost lost, and he had a bunch of excuses and didn’t man up and say ‘Listen, I got into a dogfight and I didn’t like it.’ There’s nothing wrong with saying that and there’s a lot of guys like that out there. But if we’re gonna go in there and we’re going to take this title, then Jon Jones has to fight.”

And if Anthony Smith does take that title after five fights in 13 months, he will have earned a nice vacation. So what does that look like?

“Man, I just want to go home and be there for a while,” he laughs. “That’s my motivation. Let’s go in there and get this title and go home and sit for a while. That’s what I really want to do.”