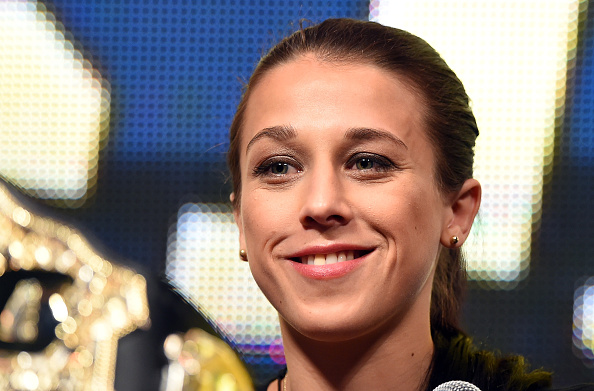 Joanna Jedrzejczyk had a pretty great year in 2015.

After closing out her freshman year in the Octagon with a split decision win over Claudia Gadelha, the Polish kickboxer used her sophomore campaign to become the queen of the strawweight division and one of the most beloved superstars on the UFC roster.

At UFC 185 in March, she told reporters that instead of learning how to properly pronounce her challenging last name, they could just call her “Joanna Champion.” That was before she walked into the cage and beat Carla Esparza to actually win the title. From there, the noted sneakerhead who was stoked about finally getting her hands on some limited edition Kendrick Lamar’s Saturday night at UFC 196, added impressive wins over Jessica Penne and Valerie Letourneau to her resume, establishing herself as a dominant force in the division.

“Let’s talk about the title fights,” Jedrzejczyk began, speaking with the media at the EA Sports Launch Party for UFC 2 last week in Las Vegas about her opponents from the previous year. “Carla was supposed to wrestle with me, she’s supposed to take me down so many times; she couldn’t.

“Jessica Penne was a smart-ass before the fight; I broke her nose, but she was lucky – she got a bonus when she shouldn’t and then she got extra money for the plastic (surgery), probably in the best hospital, so she was lucky too. Valerie was kind of confused when she couldn’t reach me with the high kick because I was slipping all the time.

“I feel sorry for all of them you know. What can I say about it?”

Jedrzejczyk said all this sporting a sly grin, happy to take little follow-up shots at the three fighters that shared the cage with her over the last 12 months and provide another example of why she has become both one of the most popular fighters in the sport and one of the top trash talkers in the game, even though she doesn’t exactly talk trash.

Where Conor McGregor takes direct aim at his opponents and potential challengers (or anyone, really) with his pre-fight gamesmanship, Jedrzejczyk takes a more coy approach, choosing instead to needle the opposition with playful comments and gestures, all delivered with a big smile and an underlying intent to provoke that almost always hits the mark.

This was never more evident than last Friday, when “Joanna Champion” walked on stage to a massive roar from the fans in attendance at the UFC’s “Unstoppable” press event prior to the UFC 196 weigh-ins.

The event served as an official announcement of the UFC’s fight schedule from April to June, inclusive, with Jedrzejczyk’s next title defense against No. 1 contender and fellow Ultimate Fighter season 23 coach Claudia Gadelha confirmed for July 8 in Las Vegas. Jedrzejczyk smiled and waved to the crowd, shook hands with UFC President Dana White and then appeared to whisper something to Gadelha, who was already seated across the aisle from her in the elevated second row on the stage.

Gadelha immediately looked annoyed and at one point, a member of the UFC security team emerged and stationed himself between the former and future combatants.

“It wasn’t hard; it was funny and I was enjoying every moment,” Jedrzejczyk said of spending six weeks in close quarters with Gadelha while filming the upcoming season of the long-running reality TV competition. “I think it was hard for her; she might go crazy a little bit because one day I was nice, the other day I wasn’t, so who knows.

“I think this fight started when they announced TUF and our fight on January 17 in Boston. I think I broke her already, but I cannot help (that). It’s me, ‘Joanna Champion.’”

And apparently the action got underway a little early too.

“We had some bad accident three days ago when we finished shooting TUF Season 23, but I’m not going to talk about it,” added the ever-coy champion.

While Jedrzejczyk didn’t want to talk about it, White shared some of the details with reporters later in the night on Friday, disclosing that the rival coaches got into a pair of scraps on the final day of filming.

“They hate each other and the staredown in the gym was crazy,” White offered at the UFC 2 Launch Party. “They started going at it and I pulled them apart. Then when the room started to clear out, (Joanna) hit her with a water bottle and it was game on.”

If it wasn’t obvious from Gadelha taking a swipe at Jedrzejczyk when the two squared off at the Unstoppable event, White confirmed these two women absolutely do not get along and the tensions ran high throughout filming and things are likely to get more heated in the four months leading up to their clash in July.
RELATED CONTENT: Fighter bio | Watch: Jedrzejczyk vs. Gadelha at Fight Night Phoenix | Joanna backstage after win over Claudia

Especially with the champion saying she doesn’t feel her Brazilian challenger actually deserves a shot at her belt, but she’ll give it to her anyway.

“It was (a close fight), but I think she doesn’t deserve to fight for a title,” Jedrzejczyk said of their first encounter and Gadelha’s case for a title shot. “I fought three times (since our first fight); she fought just one time after our fight, but okay – let’s not talk about that.

“She’s a challenger, she’s No. 1 in the strawweight rankings, so she kind of deserves it, so I’m happy that I’m going to face her. I’ve got so much respect for her – she’s a very good athlete, her jiu-jitsu is amazing – but I’m complete. I’m a champion.”

And she is eagerly looking forward to turning back her rival and continuing to entertain the masses in 2016, just as she did during her breakout campaign in the cage last year.

“I want to beat Claudia so badly. I want to give this fight for all of my fans and I’m going to enjoy this.”