Jussier Formiga: Living in the Present 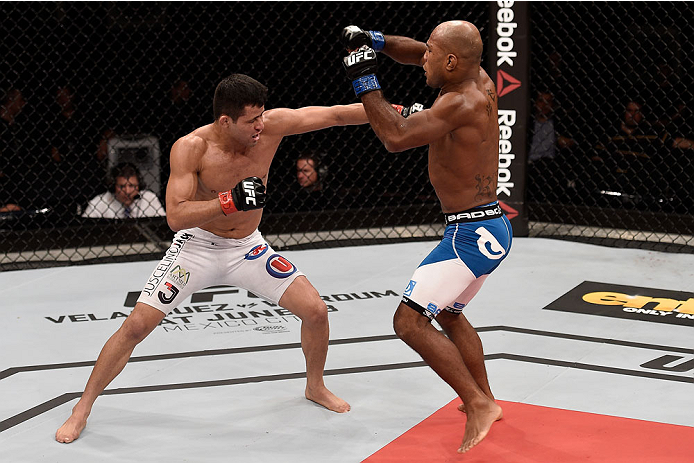 Before there was a 125-pound division in the UFC dominated by Demetrious Johnson, when you wanted to talk flyweights, the conversation usually started with Brazil’s Jussier Formiga.

A dominant fighter on the Brazilian circuit, Formiga took his show on the road to the only regional promotion truly featuring his division in the United States, Tachi Palace Fights, and continued to shine with wins over Danny Martinez and Mamoru Yamaguchi, with his only loss coming against Ian McCall.

Then it was back home for four more wins, and when the UFC did institute a flyweight division, it was no surprise that Formiga was one of the first wave of fighters brought in. But then he got stopped in his Octagon debut by John Dodson, and though he bounced back with a win over Chris Cariaso, a second TKO defeat, this one against Joseph Benavidez, left him at 1-2 in the UFC.

That could have been the signal for Formiga to be removed from the elite level and to fade away into the background. Instead, the Rio Grande do Norte native doubled down his efforts in the gym and, starting in 2014, began a three-fight winning streak that has seen him defeat Scott Jorgensen, Zach Makovsky and Wilson Reis.

“I think I changed my self-confidence as a fighter,” he said of his resurgence. “And the fact is, I felt better to handle the pressure of the UFC. I think all fighters like the pressure, but the difference is that some know how to handle it and some don’t.”

He’s right, and fighting on the sport’s biggest stage is a legitimate issue, especially when you’re expected to succeed from the moment you step into the Octagon. Some never learn to deal with that pressure. But the 30-year-old Formiga kicked everything into gear at precisely the right time, and as he prepares for Saturday’s meeting with unbeaten Henry Cejudo in Monterrey, Mexico, he’s the number three-ranked flyweight in the world, with this weekend’s bout seen by many as a possible title eliminator. It’s a topic Formiga is tight-lipped on.

“A lot of people say it is (a title eliminator), but I try not to think about it.”

What he will talk about (briefly) are his thoughts on the man at the top, the aforementioned Demetrious Johnson. The first and only UFC flyweight champion, “Mighty Mouse” has nearly cleared out the division, with the only two men above Formiga in the rankings (and the only two who have defeated the Brazilian in the UFC), Benavidez and Dodson, having lost to Johnson twice each. But Formiga, while respectful, doesn’t see the champ as invincible.

“Every fighter, even a champion, has his flaws and errors,” Formiga said. “No one is unbeatable. He is an excellent champion, but I prefer to not think about him now and instead concentrate on my actual opponent.”

That actual opponent, Cejudo, has been on the fast track to the top since moving to MMA in 2013. And after the 2008 United States Olympic gold medalist in freestyle wrestling scored three straight UFC victories over Dustin Kimura, Chris Cariaso and Chico Camus, a fourth win over Formiga could be his ticket to a Johnson fight. There’s a lot on the line for both men, and with such high stakes, is Formiga concerned about a decision going against him in a close fight in Mexico?

“I hope not, and I hope that the fight is over before the judges’ decision,” he said.

It’s the best strategy to have, and though he’s only finished one fight in the UFC thus far, the Brazilian Jiu-Jitsu black belt has submitted eight opponents in his career, and what bigger statement would there be for a title shot than finishing a fighter who has never lost? That’s the plan, and considering where he’s sitting now, it’s hard to believe he started out 1-2 in the UFC.

“This is not a problem anymore,” he said. “Now I found my way through the division and I want to get to the top.”

“In the future, this will be very important for us and the team,” Formiga said. “We already have two champions; if we have another one, it will be better.”