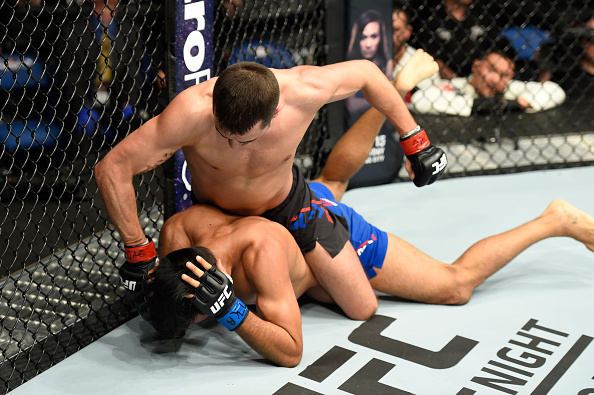 In his first bout since December 2015, Myles Jury snapped a two-fight losing streak in impressive style on Saturday night, stopping Mike De La Torre via strikes in the first round of their UFC 210 featherweight matchup at KeyBank Center in Buffalo.

Jury (16-2) got the fight to the mat in the opening minute, and he smoothly transitioned to take De La Torre’s back. After flattening his foe out, Jury began raining down blows, cutting him in the process. De La Torre (14-7, 1 NC) tried to defend, but after more unanswered shots, referee Dan Miragliotta stepped in and stopped the fight. The official time was 3:30 of round one.

The No. 11-ranked Usman dominated the opening round behind his grappling attack, with Strickland having no answers for his foe’s clinch and ground work. 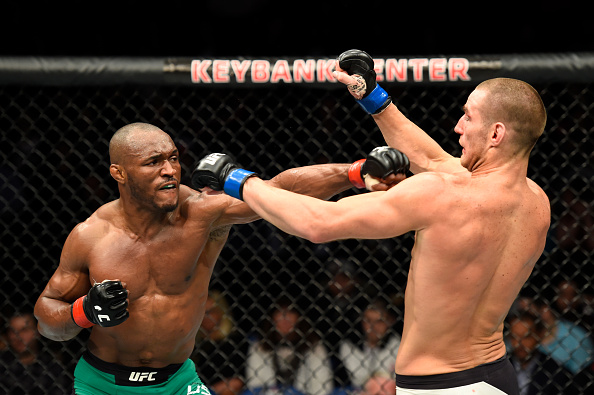 After taking care of business on the ground in the first, Usman showed off his striking in the second, drilling the Californian with several hard shots as Strickland focused on clearing the vision in his injured left eye. With 2:40 left, Usman hurt and dropped Strickland, and while “Tarzan” weathered the follow-up attack, it left him on the ground again, where Usman again made him miserable.

Usman kept the pressure on in the final round, with Strickland never coming close to getting back in the fight, and it allowed “The Nigerian Nightmare” to improve to 10-1 via scores of 30-27 and 30-26 twice.

Rosa attacked Burgos’ legs with kicks from the start, keeping the New Yorker from getting comfortable in the Octagon, and the Massachusetts native’s unorthodox striking style also paid dividends throughout the round.

In the second, Rosa looked to get the fight to the mat, and when that came up short, “Boston Strong” went back to his striking attack, and his busy work with his fists and feet continued to pay off.

Burgos finally struck in the third, with a flush left hook putting Rosa on the deck. Rosa gamely fired back, but his porous defense allowed Rosa more than a few opportunities to finish the fight, and he did just that, with referee Todd Anderson waving the bout off at 1:59 of the final round.

Patrick Cummins survived a rough first round against Jan Blachowicz to take the next two rounds and a majority decision win in a meeting of light heavyweight contenders.

Blachowicz (19-7) got on the board early with a left that dropped Cummins to the mat, but after taking some follow-up shots, Cummins was able to get back into things after the charging Poland native slipped to the mat. When the pace settled down and the two stood, Blachowicz continued to jar his bloodied opponent with hard punches to the head. With two minutes left, Cummins was staggered again, but he wouldn’t go away, and he scored a takedown moments later, allowing him to keep the fight in his wheelhouse long enough to clear his head.

Cummins (9-4) got the bout to the mat again in the second minute of round two, and after a submission attempt by Blachowicz, the former Penn State wrestler began firing off ground strikes. With under two minutes remaining, Blachowicz got to his feet and then scored his own takedown, but Cummins rose immediately and soon, the Warsaw product was visibly winded.

Unfortunately, Blachowicz still had five minutes to go, and Cummins was able to work his ground game effectively in that last round, wrapping up the win by scores of 29-28 twice and 28-28.