Junior Hernandez: That Kid Can Fight

"I just want to show the world who I am on the biggest stage you can be on." - Junior Hernandez 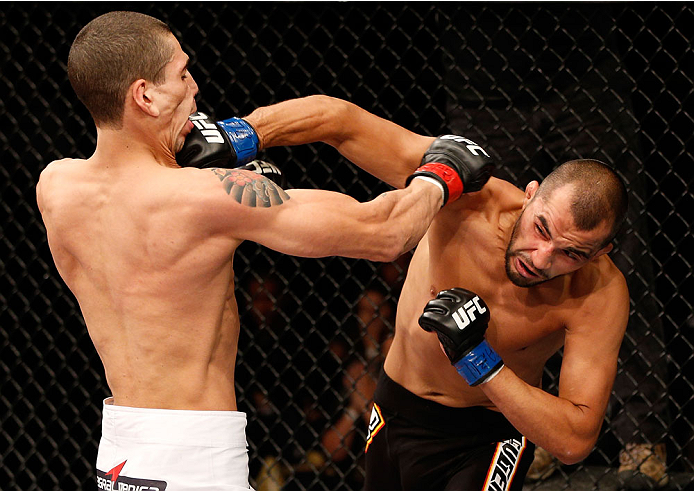 Junior Hernandez has heard all about moral victories and learning more from losses than wins. It just so happens that the Iowa bantamweight doesn’t particularly believe in such fighting adages, especially when it comes to his UFC debut against Lucas Martins in Brazil last September.

“It was my worst performance to date,” said Hernandez of the bout, which saw him get submitted at 1:10 of the first round, his first defeat since 2011. “Up until that point I hadn’t been finished in my losses, and I don’t make excuses for it. There were no Octagon jitters or nothing like that. He hit me with a shot I didn’t see and he capitalized on it. It really lit a fire underneath me to just come back and redeem myself, and win or lose, I just never want to go out like that and leave a bad taste in people’s mouths about me, because I’m a lot better than I showed that night.”

So no positives to take away?

“No positives,” he answers without hesitation, then ponders the question again. “I guess having that first international fight on my resume out of the way. But no, there were no positives. It’s hard to learn from a fight like that. It happened so fast, and it was really disappointing. It made me angry that people have that image of me. You’re only as good as your last fight, and that’s all people really remember. So that’s the picture people have in their head of me right now and that’s not what I want.”

If it sounds like Hernandez is being hard on himself, that would be accurate, as most devoted followers of mixed martial arts knew of the 14-5 veteran before he entered the Octagon, and when it comes down to it, the UFC wouldn’t have signed him if he couldn’t fight. So for Hernandez to believe that people are looking at him as if he doesn’t belong here based on one fight, those are the thoughts of a perfectionist. Now that’s not a bad way to think, but what the 27-year-old from Bettendorf does need to get rid of for his second Octagon bout against Hugo Viana this weekend in Chicago, are the feelings he had just as he began his walk from the locker room last September.

“Nobody knew who I was, other than my cornermen and the executives for Zuffa,” said Hernandez of that night in Belo Horizonte. “And honestly, walking out to the cage, I should have been excited and enjoying the moment, but I was in Florida training for the fight five weeks before, and then I had to go to Brazil, and walking out to the cage, I was thinking ‘only 15 more minutes and I get to start my trek home.’ And I should not have ever been focused on just coming back home. I should have focused on the fight and I was more excited almost to just get it over with and get back home.”

This time around, things have changed. Opting to train solely at home with the Miletich Fighting Systems team as opposed to splitting time between Iowa and south Florida, where he works with American Top Team, Hernandez is more at peace and definitely thinking more about fighting than about his flight home.

“This time I’m focused solely on the fight,” he said. “I know my family’s gonna be there, my fans are gonna be there, and I did not go to Florida for this fight. I stayed home just to be comfortable and have everything right in my head and not worry about being homesick or anything else. There are no distractions, just the fight, and I think this one’s gonna be a lot better for me as far walking to the cage and looking forward to the fight.”

And if he needed any more of a push during his daily training sessions, having former UFC champion Pat Miletich in the gym with him takes care of that.

“He’s been helping out a lot more lately since I’ve got a fight coming up, and the practices he runs are grueling and he expects no less than a hundred percent effort from everybody every day and in every minute of practice,” said Hernandez, who has been working with the renowned trainer since 2006. “And it’s just having those eyes on you. If he tells you you’re doing something wrong or if he expects you to do something a little bit better, you can’t disagree with the guy. He’s been there, done that, and having him around and just the values and the work ethic he instills in all of his fighters is what I think made them successful.”

The list of world-class fighters Miletich has worked with over the years reads like a Who’s Who of the sport, from Matt Hughes and Jens Pulver, to Robbie Lawler, Jeremy Horn, and Tim Sylvia, and on and on and on. And when you come from a gym that has produced so many champions and contenders, there is usually a bull’s eye on your back that was put there by every opponent that wants to make a name for themselves by beating an MFS fighter. Hernandez believes that any time you fight, regardless of gym affiliation, you’re a target, but he does agree that hailing from the storied Bettendorf gym does bring with it a certain responsibility.

“I think there’s more pressure on me to do right by that name,” he said. “If that’s what I’m representing, I have to uphold that to the highest standard. It’s more tacit. He (Miletich) doesn’t say you have to meet those criteria before you can fly my banner. But it’s just unspoken. You just want to do right by that name. You can’t mention the great gyms or the great fighters without having Miletich pop up in the conversation.”

And yes, Hernandez says, Wednesday sparring nights are still as hellish as ever.

“Pat calls that thinning the herd,” he laughs. “You really find out who wants to be there.”

Junior Hernandez wants to be there, and he wants to be in the UFC. So he plans on showing the world just how much this weekend.

“I want to show my true ability,” he said. “There’s a reason why the UFC picked me up and there’s a reason why I’ve had success in the past, and it’s due to my ability. That’s all I want to show – what I can do. It doesn’t matter if I have a good night in the gym, and the good performances and fights I’ve had before against good-named guys before don’t matter; what matters is the fight coming up. And I just want to show the world who I am on the biggest stage you can be on. I want people to leave with it in their head that ‘man, that kid can fight.’ That’s all I want people to say.”