Junior Dos Santos: The Wait is Over 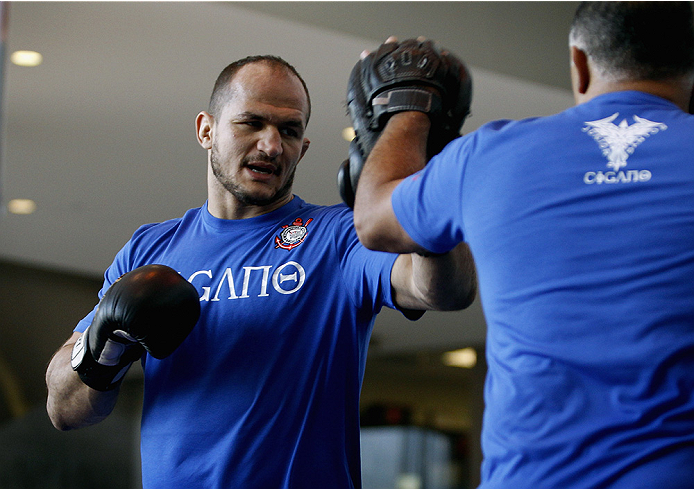 It may sound strange to those who don’t fight for a living, but when all the training is over and it’s time to strap on the gloves and compete against another well-trained athlete for 15 or 25 minutes, that’s the emotional payoff for a pro fighter.

No one would preach that mantra to the masses more than former UFC heavyweight champion Junior Dos Santos, especially these days, as he awaits his return to the Octagon to face Stipe Miocic in Saturday’s UFC Fight Night main event. For the popular Brazilian star, the last year has been nothing short of torture, as he went through an injury-induced layoff that kept him from rebounding from his October 2013 loss to Cain Velasquez. And it hurt.

“I miss everything about it,” he said. “I love fighting; it's what I was born to do. So this last year was very tough. Unfortunately, I didn't really get a break because I was training, then taking care of my injury, then training again. So it's been a tough 14 months. I'm ready to put it behind me and get back to winning. I miss my fans, I miss the Octagon, and I'm very happy to be back.”

Originally scheduled to face Miocic in Brazil in May, a hand injury forced him out of the bout and back to the sidelines. For some, that would be the catalyst for going off the rails. For the 30-year-old “Cigano,” it was the perfect time to reevaluate and add some new wrinkles to his game. Enter the Nova Uniao fight team led by Andre Pederneiras and home to several UFC standouts, including featherweight champ Jose Aldo and former bantamweight boss Renan Barao.

“There is something positive in everything,” he said of his time away from the sport. “I put a lot of time into strategy, and I was able to add some great people to my life. I joined forces with the Nova União team in Rio, and feel like I am evolving a lot as a fighter.”

Dos Santos already was – and is – an elite heavyweight, but the need to evolve and get even better has to do with the only two negative marks on his otherwise spotless UFC record – the two defeats to Velasquez in 2012 and 2013. JDS got on the board first against the Californian, knocking him out in 64 seconds in 2011 to win the heavyweight crown. But in the next two bouts, Velasquez dominated, winning the second meeting via decision and then taking the rubber match by stopping Dos Santos in the fifth round of a punishing battle. When it was over, the Brazilian admits to reevaluating everything, but for him, that’s the typical process post-fight.

“I am always reevaluating myself as a fighter, and I think maybe we learn more from losses than we do from wins,” he said. “I think Velasquez had an excellent strategy and performance that night, and definitely deserved the win.”

But does Velasquez have his number? Dos Santos doesn’t think so, and while the second and third fights between the two were one-sided, there was always that sense that one punch from JDS could have turned things around. So no, Cigano doesn’t believe Velasquez has his number, and yes, he thinks the two will meet again.

“I said it before our last fight and I'll say it again - I believe Cain and I will fight each other many times throughout our careers,” he said. “I believed all the way to the end of that fight that I could get the W. In the last round I had him in a guillotine that could have changed everything, but Cain reacted very well and was able to effectively defend against it. It could have just as easily gone the other way - that's the beauty of this sport.”

It is, and another beauty of the sport is that circumstances can change in an instant, or in the case of current interim champion Fabricio Werdum, several instants. Knocked out by Dos Santos in 2008 and subsequently cut from the UFC, Werdum worked his way back to the promotion, went on a tear, and with Velasquez out due to injury, he stepped up and took the interim title with a finish of Mark Hunt in November. If we’re playing matchmaker here, there is no more intriguing storyline at heavyweight than Werdum-Dos Santos II, should JDS beat Miocic on Saturday night. Of course Werdum has a date with Velasquez sometime next year, so if that happens, will Dos Santos be cheering for his countryman?

“I was very happy for Werdum, and happy to see a Brazilian holding that belt,” Dos Santos said, “but I don't really strategize that way - I don't choose my opponents.”

And there is a formidable one standing in front of him on Saturday in Ohio’s Miocic, who most recently blasted out Fabio Maldonado in 35 seconds in May to extend his winning streak to three.

“Stipe is coming off an excellent win streak,” Dos Santos said. “He's a world-class boxer with a strong wrestling background, so he is a dangerous guy anywhere. But I am ready, I am hungry, and I'm going to knock him out.”

Only Junior Dos Santos can talk about knocking someone out and it sounds like your buddy asking you if you want to hang out on Saturday. That’s part of his charm and it’s why all fight fans have missed this good guy who punches with bad intentions. And he’s just as happy to be back.

“I have amazing fans, and I want to honor their support this Saturday,” he said. “I want to give my fans a great show, a great fight, and a beautiful knockout. Dos Santos is back.”