"It’s going to be a good fight for the fans because he’s going to give
his best and push the fight like he always does, and well, I’m going to
go there to knock him out." - Junior Dos Santos 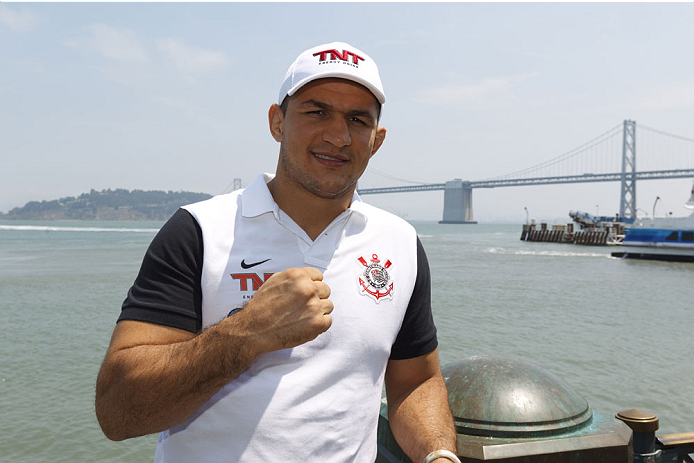 After getting rocked, dropped, and nearly stopped by Cain Velasquez in the first round of their UFC 155 rematch last December, you almost expected to see then-champion Junior Dos Santos rise from the deck and make a miraculous comeback, having survived the worst moments of his UFC career.

It didn’t happen though. Instead, round after round went to Velasquez, who punished the Brazilian until the final horn sounded, regaining his title with a shutout unanimous decision. Yet when it was over, the bruised and battered Dos Santos, his ever-present smile noticeably absent, was still able to stand tall and proud and vow to make his return. It almost reminded you of the scene from Raging Bull where Jake LaMotta was rescued by the referee in the 13th round of his 1951 bout against Sugar Ray Robinson, yet still was able to say “You never got me down Ray.”

In absence of victory, you look for the little things to hold on to, to give you confidence to fight and win again. For Dos Santos, who went through a pre-fight split with his wife and also claimed to be overtrained, being able to withstand 25 minutes of Velasquez’ fury was enough to grasp on to, enough to say ‘hey, I walked through the fire and kept going.’

Of course, if you want to refer to another boxing movie, Million Dollar Baby, there’s always Clint Eastwood’s line that “tough ain’t enough,” so we would have to see more from Dos Santos to be convinced that he would be ready for a third go with the man he beat for the title in 2011.

That “more” came in the form of his May bout with Mark Hunt. Now Velasquez hits hard, and Dos Santos proved that his beard was up to the task in the rematch, but Hunt can put you to sleep without even landing clean. But Dos Santos didn’t avoid confrontation, he didn’t look gun-shy in exchanges; in fact, he pursued them. And even with a lead on the scorecards after two rounds that would have allowed him to ride out the clock and still pick up the win, he went for the finish, and he got it – by spinning heel kick no less. It was the win that may not have convinced the already confident JDS that he was ready for his rubber match, but it most definitely convinced the rest of the world.

“Cigano” was back, and his goal was clear: to regain his belt.

On Saturday in Houston, Dos Santos gets his chance at redemption, and he can’t wait for the bell to ring.

“It’s an honor to be competing at such a high level with this guy,” said Dos Santos on a recent media teleconference. “Cain Velasquez right now is the champion, and I think he is the guy that I have to beat in this division. I respect that a lot and that’s why I’m training so hard. I’m spending a lot of time at the gym, and thinking about how I can beat this guy.”

Despite the fact that JDS holds a first round knockout win over Velasquez, a lot has gone on since 2011, and for both fighters, figuring out the other may not be as simple as it appears on paper.

“I think this third fight is going to be completely different from the other fights because now Cain Velasquez knows more about me, I know more about him and I think we are more prepared to fight each other,” said the 29-year-old.

But just because Velasquez knows that JDS will try to stand and keep his distance and Dos Santos knows that Velasquez will seek the takedown doesn’t mean that a) you can stop it or b) some new wrinkle may appear on fight night. Dos Santos knew Velasquez wanted to get the fight to the mat in the rematch, but what he didn’t expect was to get knocked down while the two traded punches standing.

“When you fight Cain Velasquez you have to know it’s almost sure that he’s going to try to take you down and you’re going to fight on the ground,” he said. “Of course I was worried about the takedowns but I took a lot of punches in the face too. And that was a good experience for me because that showed me a lot about him about his style; he’s aggressive, and he pushes the fight, so that was very important.”

What may have been more important was that Dos Santos took the best from Velasquez and Hunt and didn’t go away. It’s given the Brazilian the confidence that when the chips are down, he’ll still be standing. When you know that, it makes you plant your feet a little firmer and throw a little harder, knowing that what’s coming at you isn’t nearly as hard as what you’re throwing. It’s a puncher’s mentality, and Dos Santos is most certainly a puncher.

A knockout for Dos Santos would make him a champion again and also earn him bragging rights over Velasquez. But JDS isn’t a selfish man, so he’s more than willing to do it again. In fact, he expects that Saturday night won’t be the last time they meet with gloves on.