Junior Dos Santos: The Road Back

"Fans are going to see a lot of determination, precision, and they will
see my hand raised again. I will hold that belt again before the year is
over." - Junior dos Santos 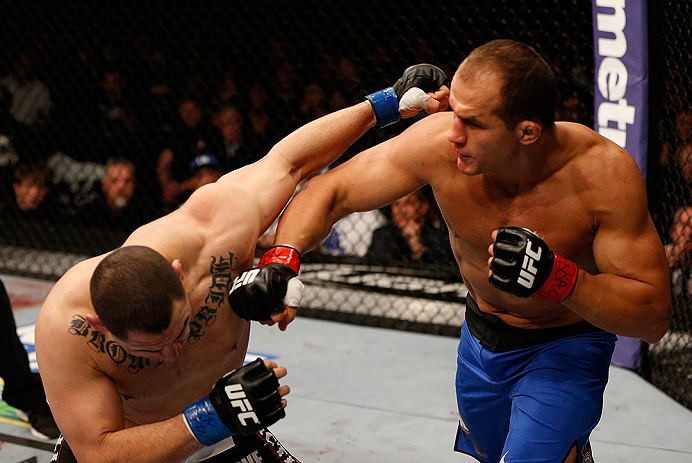 “Once a champion, always a champion” is a common saying used in combat sports. And while it sounds nice for fighters who have moved beyond the scope of title contention…they are words that mean nothing to Junior dos Santos.

The heavy-handed Brazilian slugger wore the UFC heavyweight championship proudly during his reign atop the division. But after losing the strap in a lopsided loss to the man who he claimed the belt from in Cain Velasquez at UFC 155, “Cigano” is on a mission to reclaim the belt he coveted. Only a select few have what it takes to become a UFC champion and the 29-year-old is determined to prove his time as the best heavyweight in the world was not simply a glimmer, but a position that can stand the test of time.

“It has already given me more motivation,” dos Santos said about the loss to Velasquez. “I really want my belt back, and I am doing everything I can to make that happen. Having the belt means everything to me. My life now is all about becoming champion again.”

The first step on his journey back to title contention will come this Saturday night when he squares off with former K-1 champion and fellow knockout artist Mark Hunt at UFC 160. The bout with the “Super Samoan” came to be after his original opponent, Alistair Overeem, pulled out of the fight with an injury. With the former Strikeforce heavyweight champion out of the picture, the stage was set for the unlikely contender in Hunt to get his day.

The situation was assisted by a lively Twitter campaign for the 38-year-old New Zealand native to get the fight. Scores of fans took to the social media outlet to petition UFC President Dana White to make the fight happen, and after a day of shaking up the Twitterverse, the showdown between two of the heavyweight division’s most prominent leather slingers became reality.

To up the ante, White also declared that dos Santos would earn a guaranteed title shot with a victory. Now, the former champion has a clear route back to the belt he’s eager to reclaim. The only thing standing between dos Santos and his goal is a brick-handed slugger who also has title aspirations.

“There is no pressure,” dos Santos replied when asked about the lingering title shot. “That’s exactly what I want. I want my title back.

“[Hunt] is a very dangerous guy and I need to give this fight all of my attention to make sure I win. I really appreciate that Mark Hunt accepted this fight because I wanted to stay on the card at UFC 160. I am eager to get back in the cage, to get back to fighting. I was not myself last fight. I want to be back in that Octagon and back to winning.”

The bout between dos Santos and Hunt will feature two of the premier knockout artists in the heavyweight division. “JDS” is widely regarded to have the best boxing skills in the sport and Hunt has proven credentials in the realm of kickboxing.

The stylistic matchup will be guaranteed fireworks when the cage door closes on Memorial Day weekend. There is nothing about Hunt the Brazilian is taking lightly. Where past opponents may have underestimated the 38-year-old in the past, that is not a mistake dos Santos is going to make. He’s prepared for everything the surging contender brings to the table.

“I think my style is a little more agile, fluid,” dos Santos added about the stylistic differences.  “I move around a lot, and wait for the right positioning before throwing my punches.”

In addition to being a number one contender bout for dos Santos, the fight also represents his chance to show what’s he’s learned from the last time he stepped into the Octagon at UFC 155. While losing his title has provided added motivational factors for him, it has also served an educational purpose as well.

He wants to show he’s a better fighter than the last time fans saw him inside the cage. And he’s more determined than ever to ensure the mistakes made in the past will not be repeated.

“I don’t know if I think it’s necessary, but I know that when it happens, you learn a lot,” dos Santos said about his first loss under the UFC banner. “You learn more from defeat than from victory. I know in my case, I’m coming back stronger and better than ever.

“Fans are going to see a lot of determination, precision, and they will see my hand raised again. I will hold that belt again before the year is over.”