"I go forward and I look for the knockout in every fight. Okay, it
doesn't mean I'll KO all the guys, like what happened in the Nelson
fight, but my objective is to drop all the guys in front of me." - Junior dos Santos 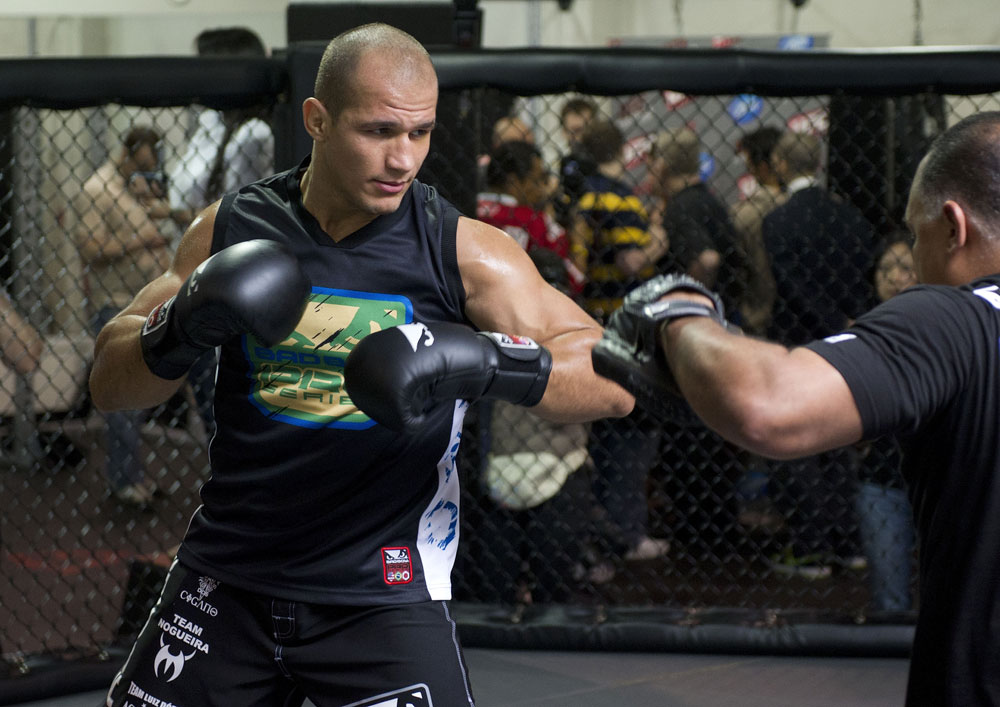 Some of the signals we make with our hands or arms speak for themselves without further verbal explanation. You know what a thumbs up or thumbs down means, and a hands up, closed fist normally signifies that you are ready to go in a toe-to-toe challenge. But other moves display much more than we can see or understand.

Heavyweight knockout artist Junior “Cigano” dos Santos, who takes on Shane Carwin in the main event of this weekend's UFC 131 event in Vancouver, has provided us with some interesting pre and post fight signals.

Observing dos Santos since his very first UFC fight against Fabricio Werdum at UFC 90 back in October of 2008, when his name is announced by Bruce Buffer, he walks to the middle of the Octagon, looks at his foe and then points to the ground. Coming from a guy like the heavy-handed dos Santos, this means "you're going down," as the KO machine has 'grounded' nine adversaries in 12 victories. But if you pay more attention to this heavyweight contender, you’ll see that after his victories he crosses him arms in front of his chest in a move which is a little more mysterious until the explains that it means that his mission is "completely completed."

"This comes from Bahia, from a boy named 'Buguinha'; he's a 15-year old who trains since he was younger with professor [Luiz] Dorea and fights in amateur boxing," said dos Santos. "He has very quick and lethal hands, and every time he won a fight, he crossed one arm in front of the chest saying, 'I cut him.' That means he spanked the guy and it became his trademark. I starting using it and nobody understood it, so crossing both arms mean you cut each piece of your opponent." (Laughs)

If you didn't see the move, don't worry, you may have picked the wrong fight, as dos Santos didn't always provide it for various reasons. If it was after the Werdum bout due to the happiness of his first victory inside the cage or after a punishing win over the legendary Mirko Cro Cop due to the anti-climatic ending, one fight in particular he couldn't do it after was his last one against Roy 'Big Country' Nelson.

For the first time ever dos Santos didn't win by finishing, as if the Nelson's belly was able to absorb all the knees and fists, while the TUF 10 winner's iron chin took the rest. But the win wasn't a step back for the Brazilian - who looked for the knockout from the first minute of the fight until the 15th.

"I'm very confident in my boxing. [UFC light heavyweight] Fabio Maldonado once told me, and it was nice to hear from a pro boxer, that if I keep an eye-to-eye focus with my foe, he can't touch me," he said. "And I believe it. I go forward and I look for the knockout in every fight. Okay, it doesn't mean I'll KO all the guys, like what happened in the Nelson fight, but my objective is to drop all the guys in front of me."

If dos Santos couldn't emulate Buguinha's signal of mission complete after UFC 117, the celebration for the victory – being presented with a title shot - was a certainty. It was a place he had searched for since his first fight in the UFC two years ago, and last August he knew that his next fight would have the desired UFC heavyweight belt on the line against champion Cain Velasquez.

However an injury which kept Velasquez sidelined from competition for around six months was announced last December, putting the Brazilian in waiting mode for some time. It was time to process things and keep his focus in the face of unexpected bad news, as he wasn't going to be fighting for the title anytime soon.

"I always kept the focus; it was what I learned to do," he said. "Dorea taught me that we need to be prepared for everything because we don't know what can happen. Of course I was disappointed; I qualified myself to be a challenger, I reached the place where all heavyweights want to be and I'll need to wait a bit more now. I'll do another kind of fight and the motivation is different, but it is still big because I haven't competed in the last 10 months. My training was good and now I'm close to my next bout, this time against Shane Carwin. And I think my motivation will be the key factor inside the Octagon."

And when a door is shut, another is opened - and while dos Santos didn't have a rumored opponent initially, a slot as a coach on TUF 13 arose, and the challenger would meet former champ Brock Lesnar as the opposing coach. This stellar opportunity would soothe him for not having an immediate title match, and it would also help boost dos Santos' image, giving fans a chance to know and learn more about him.

"It was an excellent situation, because [coaching] was a different type of challenge. Since I started fighting I have had things like that surprising me all the time in the fight world," dos Santos said. "This participation on TUF was fantastic; my English wasn't 100%, but the UFC trusted in my potential and I faced it, thanks God! Like all challenges, I don't regret them, I face them and I think I did well."

Yet there would be more changes, as Lesnar dealt with another bout with diverticulitis, rendering him unable to fight on June 11th. So now the native of Cacador will face former interim heavyweight champion Shane Carwin. But the change hasn’t rattled dos Santos.

"I don't see it like a big change because a fight is a fight and we need to be prepared for everything," he said. "The modification here is an adaptation to Carwin and his heavy hands, but I think it's only that. I'm prepared for him. People will see how good my camp was inside the Octagon by what I'll display."

The switch may have been lucky for some, bad luck for others. While Carwin was taking on first timer John-Olav Einemo on the main card of this same UFC 131 event, Lesnar and dos Santos would be main eventers. But the world kept turning, the ex-champ left the card due to illness and Carwin now 'only' has 'Cigano' between him and a title bout. Fate's conspiracy? Dos Santos doesn't believe so, saying everything happens for a reason.

"Carwin is an excellent athlete, he deserves respect and I respect him. I have luck in my career too. Since the very beginning I was among the tops. I think I'm a guy with huge luck and it all gives me good experience preparing myself for fighting great names," said 'Cigano,' or 'Gypsy' (In English) if you prefer. "So I'm gaining experience, my body is adapting itself for it, and I'm more intelligent in fighting and more comfortable stepping up into the Octagon every day. I think at the moment I get my title fight again, if God permits this year, I'll be very prepared. And one more time I will be working hard to give my best in order to bring the belt here to Brazil."

**Paula Sack contributed to this article