"If Plan A works, you’re not going to see my plan B. That doesn’t mean I
don’t have Plan B in my back pocket ready to go; it just means I haven’t
needed to use it." - Junior dos Santos

More on JDS:
"I Know He Will Be Knocked Out," Fox Sports
Is dos Santos Too Nice? Yahoo! Sports 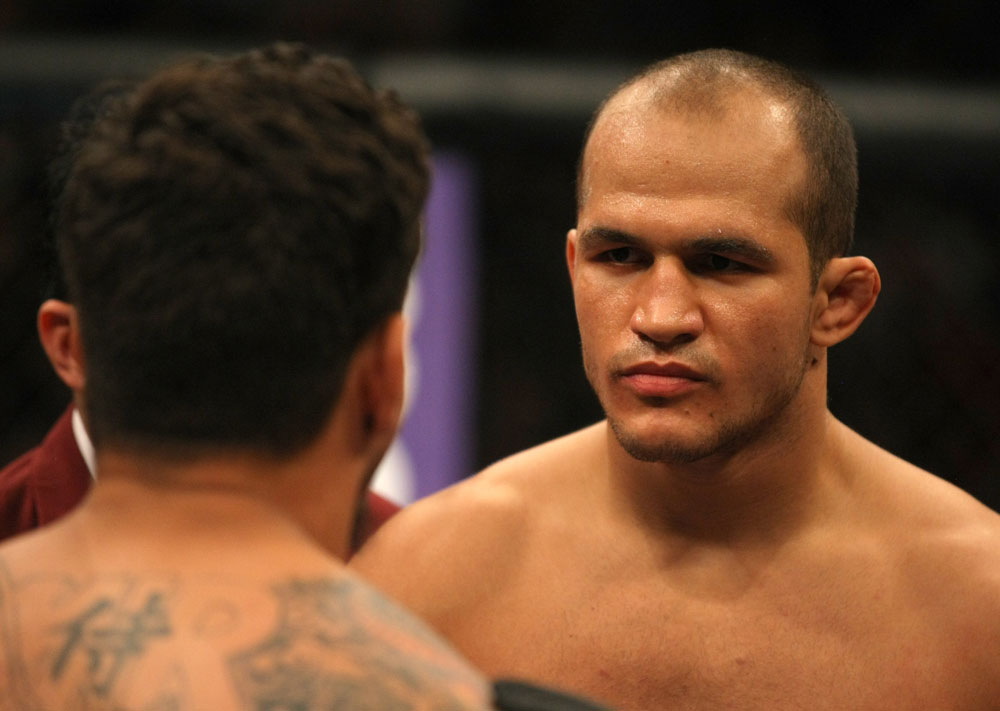 For all his dominant success, questions still swirl around UFC heavyweight champion Junior dos Santos on the eve of his rematch with Cain Velasquez.

Despite earning the title with a 64-second knockout victory over Velasquez last November on FOX, and battering former champion Frank Mir from pillar to post in his first title defense back in May, there are still those wondering whether UFC 155’s main event meeting between the two best heavyweights in the sport will play out in a similar fashion to their first encounter, or if a healthy Velasquez will be able to regain the title and halt dos Santos’ unbeaten run inside the Octagon?

It’s a curious position for the champion to be in heading into what will be the final UFC fight of 2012. “Cigano” has posted a perfect 9-0 record in the UFC, beginning with his spectacular upset win over Fabricio Werdum at UFC 90, and continuing through battles with the likes of Stefan Struve, Roy Nelson, and Shane Carwin before besting Velasquez and Mir in his two most recent outings. Seven of those victories have come by way of stoppage, with dos Santos proving time and again that he possesses a lethal combination of power and speed in his hands.

But as the weeks turned into days, and the days turned into hours leading up to tomorrow night’s main event, the discussion hasn’t centered on the dominance the champion has exhibited in the cage thus far, but rather whether he’ll be able to duplicate his initial performance against Velasquez, even though his last nine outings have provided no reason to question the champion’s capabilities inside the cage.

“I think it’s natural to be curious about how a fighter would do in a scenario where you haven’t seen them before,” admitted the champion in the days leading up to his rematch with Velasquez. “It’s natural to wonder how good a boxer a wrestling specialist is and vice versa. But it’s like I’ve said before – if Plan A works, you’re not going to see my plan B. That doesn’t mean I don’t have Plan B in my back pocket ready to go; it just means I haven’t needed to use it. The truth is, I really like to knock people out.”

Even though that’s exactly what dos Santos did to Velasquez last time they met, questions remain because the American Kickboxing Academy product was struggling with injuries heading into their prime time, network television title tilt last November. While Velasquez’ comments heading into the fight featured the usual rhetoric, his camp changed their tone after the bout, and have continued to discuss the injuries that limited him the first time around in the build-up to the rematch.

Though dos Santos could certainly take umbrage with the string of verbal asterisks the team at AKA has been looking to attach to Velasquez’ performance the first time around, the humble champion takes a more diplomatic approach instead.

“That doesn’t really frustrate me. I had some limitations of my own going into that fight, and there’s no way to know whether a result would have been different if he or I had been 100 percent.

“What I believe is what you saw in that fight – I executed my strategy well, and I won. I had warmed up in the locker room with that exact combination. I heard Coach Dorea calling for me to use it, I used it, and it worked.”

For some, success and familiarity breed complacency, while the trappings of fame bring an inflated sense of self, and the obligations of being champion can often interfere with everything that needs to be done to maintain that status. As the wins and public appearances pile up, training may remain the primary focus, but the intensity and frequency of those efforts can often decrease.

That is not the case with dos Santos.

Though he is appreciative of the attention and eager to capitalize on the new opportunities that have arisen in the year since he ascended to the top of the division, “Cigano” remains intensely focused on doing the things that helped him fulfill his dream of becoming UFC heavyweight champion in the first place.

“I hope this was the first of many years as the UFC heavyweight champion, because it brought me many good opportunities and moments,” admitted the affable 28-year-old Brazilian. “Life got a little busier for me, but I am loving every minute and I’m very appreciative of it all.

“I am very excited and honored to represent Nike,” dos Santos continued, discussing the sponsorship deal he inked with the massive sports apparel company earlier in the year. “The people there are fantastic. I got the chance to visit their Portland headquarters and everybody was very welcoming, and I hosted a great group from Nike down in Salvador, Brazil for some training. They were such a great group of people, so it’s exciting to be working with them and I look forward to long partnership with the company. I think it’s great to see MMA embraced by the world’s best sports brand, and I hope other major companies will follow their lead.

“(But) I don’t let anything interfere with my training; that always has to come in first place. There are a lot more visitors and observers at my training center, and more people stop me and want to talk to me on my way in or out. I am grateful to them for their support, so it’s an honor, not a burden, to have them there. As far as media and appearances, I take the same approach – I am thankful that people are interested in me because that means they support my career.  It’s my job to make sure I fit it all into my schedule and don’t let it interfere with training.

“Preparation is the key to my success, and I always work harder than I did the last time around. I would be a fool to underestimate Cain. There is no room for complacency in my camp.”

More than silencing the critics who still aren’t sold on his 64-second win from last November, a second victory over Velasquez on Saturday night would put dos Santos into the UFC record books.

While Anderson Silva and Georges St-Pierre have enjoyed lengthy reigns atop their respective divisions, stacking up title defenses with relative ease, no heavyweight has been able to successfully and consecutively defend the belt more than twice. Besting Velasquez would bring “Cigano” into a tie with Randy Couture, Tim Sylvia, Andrei Arlovski, and Brock Lesnar, and leave him one more win away from sole possession of the record.

Having already reached his goal of becoming champion, breaking records and building a legacy as the greatest heavyweight in UFC history are a part of what motivates him going forward, but there is also something far more basic driving dos Santos, and it’s part of why he showed no hesitation in accepting a second meeting with Velasquez.

“I think breaking records and leaving a legacy drives me a lot, but it’s also more simple than that. I am driven by the simple desire to always improve. I want to continue to develop and grow as a fighter. I want to walk out of each training session a little more skilled than I walked in. It’s just part of my nature – anything worth doing is worth doing well, and I always want to give my all in everything I do.

“I welcome fighting Cain again because Cain is the most talented fighter out of all my competition. To be the best, you have to fight the best, so I don’t ever want to take an easy fight. Fighting a guy like Cain requires me to train as hard as I can, and to give my all, and that’s what I want.”