Junior Dos Santos Eyes A Climb Back to The Title

Despite Setbacks, A Focused JDS Sees A Clear Path Back To Heavyweight Gold
By Gavin Porter, on Twitter: @PorterUFCnews • Aug. 14, 2020

After knocking Derrick Lewis out in March 2019, Junior Dos Santos thought he was on the track back to the heavyweight belt.

Then two TKO losses, the first coming at the hands of Francis Ngannou and the second to the surging Curtis Blaydes, put him in a difficult position. His first instinct was to book another fight as soon as possible, as he needed a way to get rid of the taste of defeat.

Order UFC 252 For Any Device Here

But the COVID-19 pandemic forced him and the world to sit back and see how the rest of 2020 was going to unfold. That time away from competition allowed Dos Santos to make major changes to his diet and give him time to refresh his mind. 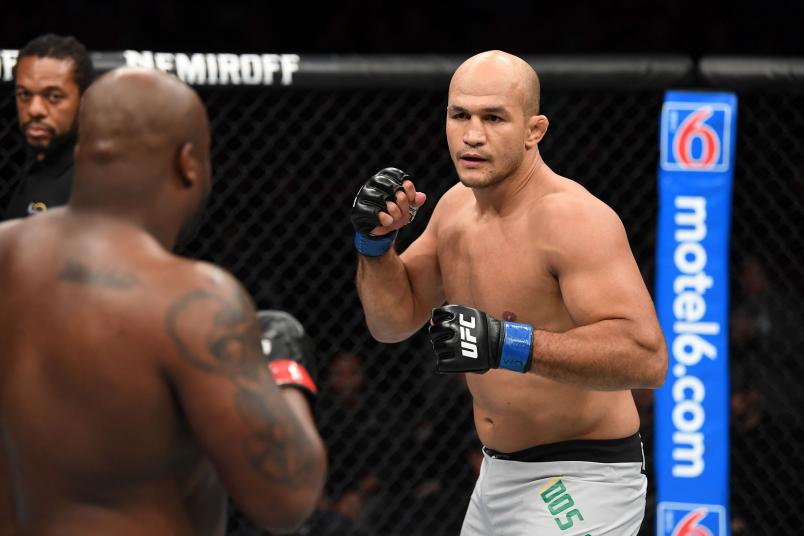 On Saturday, Dos Santos makes his return to the Octagon against Jairzinho Rozentruik. It is a huge fight for Dos Santos and for the landscape of the heavyweight division. With champion Stipe Miocic and Daniel Cormier in the UFC 252 main event, settling their trilogy on the same night, Dos Santos has his eyes on a return to title contention.

“I have everything that it takes to be the champion of this division, I just need to put a few things together better and I’m going to do this,” Dos Santos told UFC.com. “I want to be better than I ever was before because I love what I do. I’m living in an amazing moment. I’m a happy man and I’m a blessed man. I’m living in this moment and I feel like even at 36 years old I’m still growing. I’m not just learning from two negative results; I’m learning from a decade of fighting in the top 5 of the heavyweight division.”

Dos Santos isn’t exaggerating. He made his UFC debut at UFC 90 and knocked out Fabricio Werdum and has amassed a record of 21-7 in the cage. If you think of a big name in the UFC heavyweight division, Dos Santos has likely fought and defeated them.

That experience is something that has guided “Cigano” through the first back-to-back losses of his career. It also gives him confidence, knowing that he’s competed with the absolute best in the scariest division in the sport. His UFC 252 opponent on the other hand, who is 10-1, has very little UFC experience in comparison to the former champ.

But that doesn’t mean Dos Santos is overlooking “Bigi Boy” one bit.

Rozenstruik is a very tough guy. He has heavy hands and I’m expecting a very hungry Rozenstruik for this fight because he had a negative result in his last fight,” Dos Santos said of Rozenstruik, who is the only UFC fighter from the country of Suriname. “We both are hungry for a victory and it is going to be super fun for the fans to watch.”

It’s a high stakes matchup for both heavy hitters. The winner likely sets themselves up with a chance to get to the belt with one or two impressive performances. That opportunity is what Dos Santos has been clamoring for since the day he lost the belt to Cain Velasquez in 2013.

“I just hope that whoever wins between Stipe and Cormier comes back to fight again as soon as possible to make this division happen,” Dos Santos said. “We can’t stay waiting for them to feel good to fight. They have to be good champions and do their work. I think next in line is Ngannou and even though I don’t know what’s going to happen, I’m not in a rush. I’ll get back to the title.”