"I don't want a boring fight. Somebody will get knocked out." - Junior dos Santos 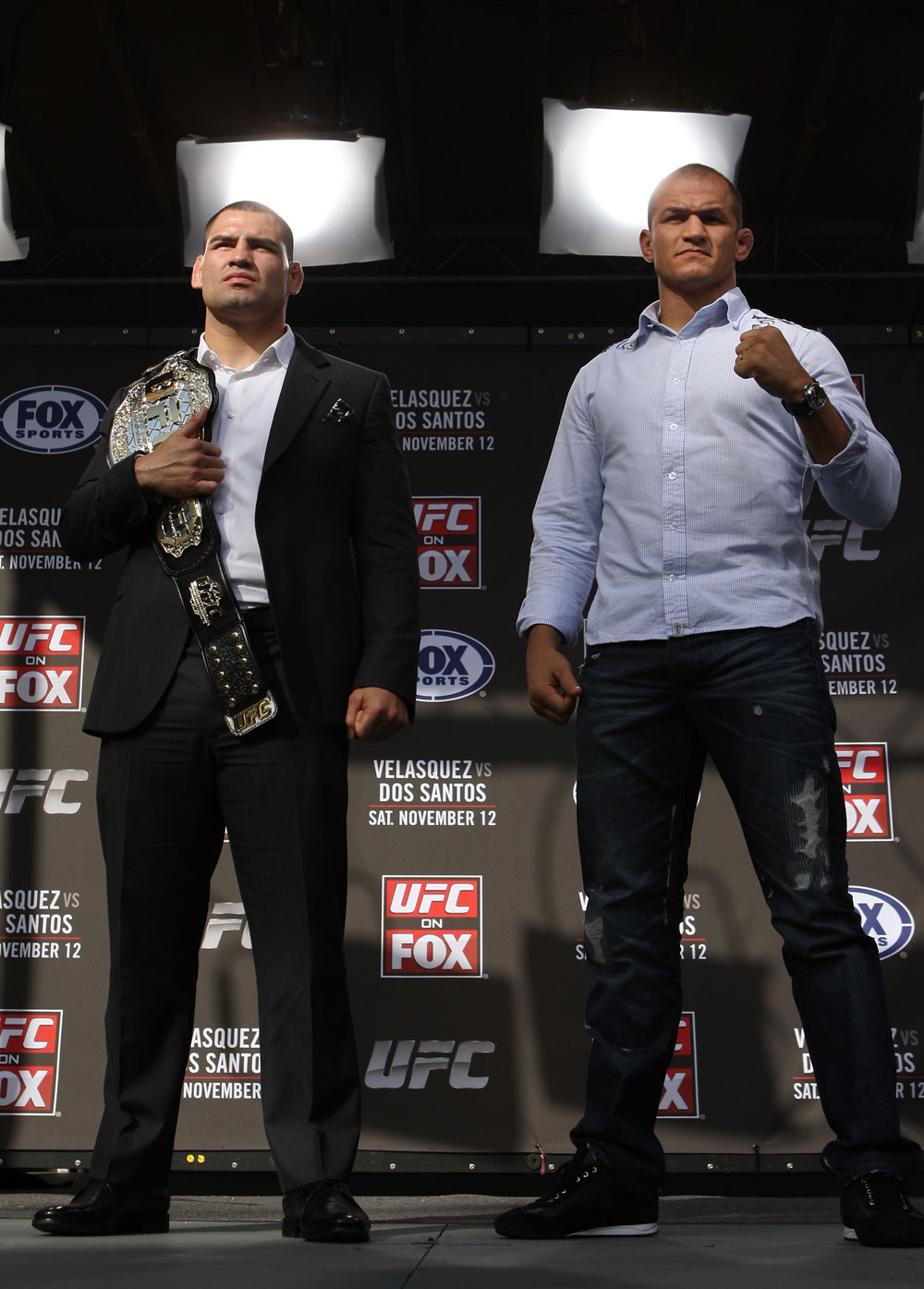 If you’re wondering why Junior dos Santos is representing the UFC (and the sport of mixed martial arts) along with Cain Velasquez on this Saturday’s premiere event on FOX, it goes way beyond left hooks and right crosses.

For me, the ‘a-ha’ moment came on a Sunday night in March of 2010, shortly after dos Santos scored his fifth consecutive UFC victory with a first round knockout of longtime contender Gabriel Gonzaga. We were in the van transporting fighters and staff back to the host hotel, and I called back home to check in on the family. Well, the first words out of my wife’s mouth were all about dos Santos and his KO win. I turned back to the Brazilian contender, who was in the early stages of picking up English to add to his native Portuguese, and told him that my wife was very impressed with his performance.

That now familiar dos Santos smile shot from ear to ear and he told me excitedly “Thank you, thank you, give her a hug for me.”

My wife was sold, and Junior dos Santos had a fan for life in New York with that comment. I have to assume that it’s been like that for anyone who has encountered “Cigano,” a fighter whose charisma will likely ensnare any new viewer who sees him on Saturday night in Anaheim, and in the time since the Gonzaga fight, his English has improved beyond leaps and bounds, making him even more accessible to fans and the media.

“I think the secret is to pay attention, and ask questions,” he said of his impressive grasp of the new language. “I pay attention to everything - TV shows, song lyrics - and when I hear somebody using a word or phrase that I don't know, I ask them what it means. I learn things pretty quickly, so that helps too for sure.”

Seeing him these days, it’s hard to fathom that it’s only been slightly over three years since he first exploded on the UFC scene with a first round knockout of countryman Fabricio Werdum in 2008. Back then, he was like many Brazilian fighters who came to the United States - they were great to watch in the Octagon, but there was a distance between them and the fans because of the language barrier. Dos Santos has done wonders in bridging that gap.

And while he still gets assistance from manager and translator Ana Claudia Guedes when needed, dos Santos’ ability to carry his end of the media load has helped make this fight the event it is. So while everyone loves a good old-fashioned grudge match, at this important juncture in the history of the sport, you couldn’t have two better representatives for MMA than dos Santos and Velasquez. Dos Santos humbly agrees.

“I think people have a lot of misconceptions about the sport,” he said. “And it doesn't help when fighters act like cavemen to each other. But sometimes people who scream the loudest get the most attention, and in effect the negative behavior is rewarded. It's tough to fault somebody for something that seems to work effectively in their favor. For me, personally, I prefer to do my talking inside the Octagon. I treat other athletes with respect, and I have no ill will or hard feelings towards anybody. I fight for the sport, and I talk where it matters - in the Octagon.”

That’s the main reason dos Santos is here, because while there are plenty of nice guys in this business, not all of them pack the punch and possess the talent that the number one contender from Salvador has. And in the process of going 7-0 in the Octagon with five finishes, he has achieved something unique in the ultra-competitive world of the UFC. He is an undisputed number one contender. There are no arguments that this guy or that guy should get the next shot at Velasquez’ belt. It’s dos Santos and no one else.

“The importance of the fight isn't lost on me,” he said. “I know what a huge event it is. But I go into every fight ready to give my best, ready to give my all. I take the importance of the event, I take what you call “pressure,” and I turn that into motivation. That's what it is for me - motivation to fight my best game, and to leave everything I have inside that Octagon.”

Dos Santos and Velasquez have both dismissed the idea of pressure so much over the past few weeks that you have to start believing them. And maybe it is true. Maybe after you’ve made that walk so many times it becomes just part of your routine. But make no mistake - this is no ordinary fight. In fact, given that dos Santos and Velasquez are elite and dynamic heavyweights who haven’t reached their 30th birthdays yet, it wouldn’t be out of the realm of possibility that Saturday’s bout could be the beginning of the UFC’s version of Ali-Frazier.

“Yes, I'm sure that regardless of the outcome of this fight, we will fight each other again,” said dos Santos. “I know that, but I don't spend time thinking about future fights; the only fight on my horizon is the one directly ahead of me.”

And in Velasquez, dos Santos will be facing someone unlike anyone he’s faced before.

“Cain Velasquez is a really complete fighter, and also a very nice guy,” he said. “He has always treated me well, and with a lot of respect. I think Cain's strengths are fairly clear to those who watch his fights: his cardio is his top strength, and his ground and pound is brutal. But I am prepared for both of those, and I feel really good. I'm more excited than I am concerned; it's an honor for me to fight somebody of his caliber, and I look forward to it.”

The simple breakdown to the fight is that standing it favors dos Santos and on the mat it favors Velasquez. But what may be the key factor is how Velasquez reacts in his first fight since surgery on his right rotator cuff and his title-winning bout against Brock Lesnar in October of last year. Dos Santos was in attendance for that fight, scouting his next foe.

“That fight put two top wrestlers against each other, and consisted of each trying to take the other down,” said the 27-year old. “There were some good strikes, especially that knee that Cain got in. But I think Brock may have spent too much energy trying to get Cain down; he may have worn himself out before he even took that knee to the head.”

What Velasquez certainly showed that night was the ability to deal with adversity, just like he did in his UFC 99 win over Cheick Kongo. And while neither has gone five rounds, Velasquez does have the experience of preparing for the championship distance in the lead up to the Lesnar bout. How did that process go for “Cigano?”

“I think my fights against Roy Nelson and Shane Carwin helped me with that, helped me to learn to pace myself to go several rounds,” said dos Santos. “I think at the Roy Nelson fight, for a little while I got frustrated because he wasn't going down. And I learned from that. I learned that I have to take my time, stick to my own fight strategy, and take good technical shots. So I'm definitely prepared, physically and mentally, for a five round fight. That said, I don't think this fight will go five rounds. And I don't want it to. Five rounds is boring in the heavyweight division - I don't want a boring fight. Somebody will get knocked out.”

That’s what fans want to hear from their heavyweights. What does Junior dos Santos want to hear on Saturday night? That answer is as big as the smile on his face.

“What I want to hear is ‘the NEW UFC heavyweight champion,’” he said. “That's what I want to hear. I sometimes imagine Bruce Buffer saying that, and it gives me motivation. Becoming the champion is a dream so big that I could never have imagined it.”