"Don't get me wrong, I do like to brawl, but I'm trying to develop as a fighter. My goal is to always be better in each fight than I was in my last." - Chan Sung Jung 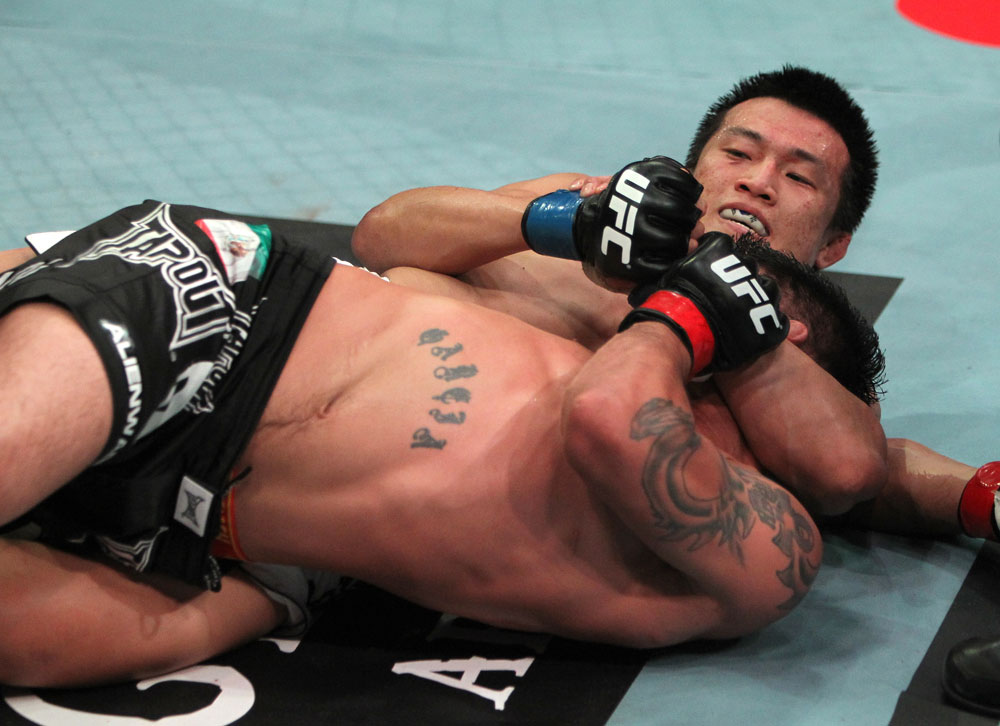 Just like “The Axe Murderer,” “The Assassin,” or “The Hitman,” if you’re nicknamed “The Korean Zombie,” you’re expected to fight a certain way. For Chan Sung Jung, his moniker almost required him to walk through hellacious amounts of punishment, shake it off, and then chop down his opponent.

Then came his rematch with Leonard Garcia in March.

Their first bout in April of 2010 was dubbed “Fight of the Decade” by Joe Rogan, and it lived up to “Zombie” standards in terms of Jung taking everything Garcia threw at him and then roaring back to deliver his own form of payback.  And though he lost a close decision in the WEC bout, Jung gained a legion of fans in his United States debut.

Nearly a year later, they met again, this time in the UFC’s Octagon, and the second time around, Jung evened the score, defeating Garcia in the second round. But it was how he did it – with a finesse move that had never finished a UFC fight before, “the Twister” popularized by Eddie Bravo. He was no longer just “The Korean Zombie.” Now Jung was something a lot more dangerous.

“It was nice to be able to show some of the aspects of my game,” said Jung through translator / manager Brian Rhee. “I think a lot of fans who aren't familiar with me don't think I have a ground game at all, that I'm just a brawler. Don't get me wrong, I do like to brawl, but I'm trying to develop as a fighter. My goal is to always be better in each fight than I was in my last. So, it was great to show the fans something that many of them haven't seen before.”

If you haven’t seen the Garcia fights, go back and watch them now, if only to realize the contrast in the way the Po-Hang, South Korea native fought each bout and how he evolved as a mixed martial artist in the space of a year. That should be every fighter’s goal, to keep improving and adding wrinkles to his game, but Jung also got a little wakeup call in between his two clashes with Garcia in the form of a second round knockout loss to George Roop in September of 2010. That defeat, Jung’s lone setback by knockout, made him aware that despite his nickname, he was not bulletproof.

“I still need to work on being more well rounded as a fighter,” said the 24-year old. “In this game, you always have to be working on getting better, or someone else is going to pass you by. I think I made progress after my fight with Roop. It was definitely the right decision to develop my style, but I don't know if I'll ever be completely satisfied.”

That’s a good thing, and while he continues to work with his Korean Top Team squad, he’s also open to work with other fighters, such as when number one lightweight contender Benson Henderson made a recent visit to their gym.

“Unfortunately, we didn't get to train together very long, but it was a great experience,” said Jung. “Ben's a great guy and he has all the makings of a champion. We met a while back and we had invited him to come train with us at Korean Top Team, so it was nice that he finally came. He said that he plans to come back later train with us for a little longer next time.”

The training sessions came at a perfect time, as Jung now prepares for his Saturday bout with Mark Hominick. The UFC 140 fight takes place in Hominick’s home province of Ontario, which is no problem for Jung.

“I think being the underdog makes it easier sometimes I don't feel as much pressure when everyone's rooting against me,” he said, but truth be told, few, if any, Asian fighters have made the positive impact in North America that Jung has, and he’s thankful for his new fanbase.

“I think it's my fighting style,” said Jung when asked about his appeal. “From my first fight in the WEC against Leonard Garcia, I showed people that when I fight, it's going to be a show and they're going to be entertained. I try to leave it all in the Octagon every time I go out there.”

The fight with Hominick is as close to a can’t miss as you’ll find in this sport. It could almost revisit Garcia-Jung I in terms of action, but “The Korean Zombie” knows that there will be no wild home run swings coming from a precision striker like Hominick.

“His striking is crisp and technical and he has very good takedown defense,” said Jung of his opponent. “He's a very good fighter.”

The Thamesford native is also a recent featherweight title contender looking to get back in the conversation for a shot at champion Jose Aldo, so if Jung can pull the upset, all of a sudden he’s the one moving up the ladder.

“I'm not looking past Hominick,” said Jung. “It would be a huge win and I think it would put me in the mix in the division. Hopefully a win over a great fighter like Mark would put me one step closer towards the championship. And making a statement in this fight would be a start. Being a big underdog in this fight, with everyone saying that Hominick's striking outclasses mine, I think that winning by knockout would put people at attention.”

It certainly would. But which Jung will show up on Saturday, the brawler or the technician? He’s not giving anything away, though he does admit that when the crowd starts roaring, all bets are off.

“Yeah, that temptation (to brawl) is always there,” said Jung. “I like brawling and I like putting on a show for the fans, but I just don't give into it. I just have to stay calm and stick to my game plan.”