"I’m flattered that people think I’m a pioneer, but I didn’t pioneer anything so much as I just didn’t quit." - Julie Kedzie 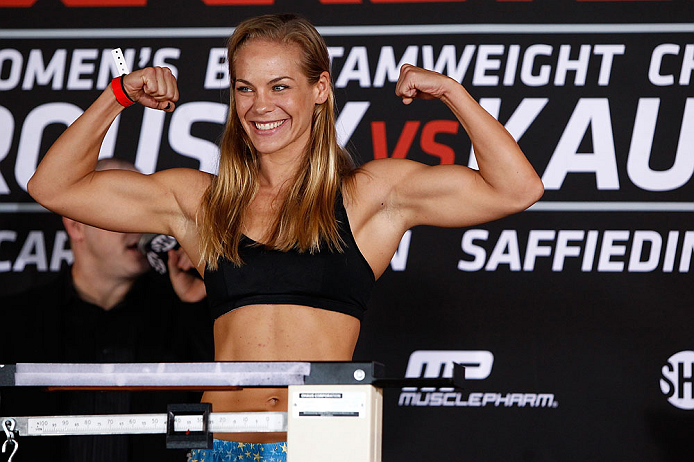 “The first thing I think of when someone says that is nope, that’s Debi Purcell, Tara LaRosa, and Marloes Coenen,” said Kedzie. “Those are the girls that I saw first and who made it possible for me to be there. I’m flattered that people think I’m a pioneer, but I didn’t pioneer anything so much as I just didn’t quit.”

Kedzie is being modest. She is a pioneer of the sport, having competed as a pro since 2004, before even the men’s side of MMA began to hit the mainstream. For the ladies, it was a lot steeper climb, but at the time, the Chicago native didn’t even care.

“I remember thinking that as small as everybody thought the women’s fight community was, I thought it was pretty large considering how weird it was,” she laughs. “When I first started, people didn’t understand it at all. I was watching my first UFC, I was 14 or 15, and I had a really kind instructor who was very protective and fatherly, and he didn’t want me to watch the UFC because he was afraid it would be too much and I wouldn’t be able to handle it.”

He didn’t know Julie Kedzie, a fierce competitor with a personality to match, aptly earning her the nickname “Fireball.” And as soon as she got a taste of the sport on the groundbreaking Hook N Shoot shows in Indiana, she didn’t just prove that she could handle the sport, but that she was in it for the long haul

“Being a part of it then, you were kind of in a special club,” she said. “I didn’t consider myself to be a professional athlete. I do now. But then, it was something I did because I loved to do it. I was excited to get paid two, three hundred dollars for a fight. I was like ‘wow, that’s awesome.’ In my career, I worked three jobs just to be able to take fights. Now, when I look back at all of it, I say, wow, can you imagine Michael Jordan – not that I’m comparing myself to Michael Jordan - working all those jobs so they could do pickup games for cash?”

No, but it was fighters like Kedzie that laid the groundwork for the Gina Caranos and Ronda Rouseys of the MMA world to make their names in the ensuing years. In fact, Kedzie’s 2007 bout with Carano helped put the sport on the map. But only now is the 32-year-old getting her chance to introduce herself to a wider audience as a UFC fighter, something she is still coming to grips with.

“I really hate the word ‘deserve’ and I don’t think anybody deserves anything; I think it’s something everybody earns,” she said. “And I think that over the course of my career I’ve worked so hard for this that I would have understood if they didn’t pick me up because my performances in Strikeforce were good but my results weren’t. But I knew I was gonna make it anyway. So if they hadn’t picked me up, I just would have figured, well, I’ll earn it in the next couple fights.”

In Strikeforce, Kedzie came up on the wrong side of bouts with Alexis Davis and Miesha Tate, but neither defeat issued a blow to her reputation or popularity among the hardcore fans. This Saturday against Germaine de Randamie though, she knows that it’s imperative that she get back in the win column. That doesn’t mean she’s trash talking her foe or making bold proclamations; quite the opposite.

“I know I’m scared of it,” she laughs when asked about the fight with the former kickboxing star. “I would watch her stuff on youtube and I was like ‘holy crap, this girl is good.’ And I think what she’s done in kickboxing should not be ignored. She’s definitely broken barriers the way Holly Holm has in boxing and Ronda has in judo. It may not be the same level of national recognition, but Germaine has done incredible things for females in combat sports and I think that more attention and recognition should be paid to that. She’s incredible. But the thing is, I think I’m pretty damn good too, and I’m willing to take this fight because I want the fights that scare the s**t out of me. Otherwise, it’s not gonna be worth it. And everybody scares me to a certain extent, but she really scares me and I want that. I want that fear and that thing to propel me forward because that’s how you know who you are as a person.”

Kedzie should already have the answer to that question, and it’s a positive one. But it’s not something that came without growing pains, growing pains that are long in the past.

“I saw an interview with (actor) Alan Cumming and he was talking about what he would say to young actors when they ask him for advice,” she said. “And he said the thing you have to tell young actors is that they have to have fun doing it. And you have to have fun going through hell in your training. It has to be a good time, it has to be something you enjoy, or it’s just gonna get old and just be about money, and your passion won’t be in it, and you’ll feel pressured to do things you don’t want to do, and for me, that’s the biggest lesson I’ve learned.”

Sounds like the type of stuff pioneers pass on to the next generation. But Julie Kedzie feels like she’s just getting started.

“Sometimes I was in the right place at the right time, and I’m not saying that to downplay my fighting because I think I’m a damn good fighter,” she said. “But I took the opportunities I took, I hustled my ass off, and I worked really, really hard to make a name for myself in this sport. It’s nice to be part of the foundation of this building. I love that, and there’s no way I’m stopping now.”