"It’s interesting because I either get a lot of love or a lot of hate, and either way I’m happy about it." - Julianna Pena 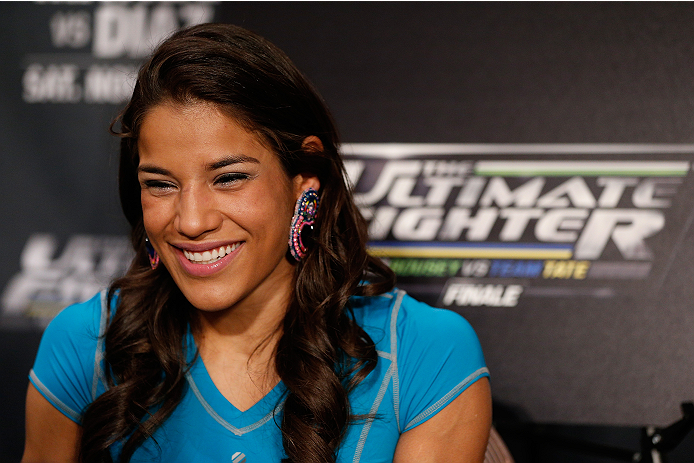 There’s always one. On each season of The Ultimate Fighter, there’s a cast member that either captures the imagination of the fans or makes their blood boil. There’s no middle ground when it comes to fighters such as Chris Leben, Junie Browning, or Julian Lane. But where season 18’s polarizing figure – bantamweight Julianna Pena – differs from the aforementioned trio is that on Saturday night, she won’t be fighting on the season finale undercard or sitting at home. Instead, she’ll be competing for the TUF 18 title against Jessica Rakoczy, and love her or hate her, you’re probably going to be watching.

“There’s not really too much of a happy medium there,” said Pena. “It’s interesting because I either get a lot of love or a lot of hate, and either way I’m happy about it. At least they’re talking about me. I feel like all the interesting episodes are usually when they’re focused on me and what I do instead of them and what they can do. So it’s funny. I see them focusing on me and me being that person that’s the hated one, and so I welcome that and I encourage it. As long as they’re talking, I’m happy.”

If the UFC is as real as it gets, then Pena is as blunt as they get. For those of us on the other side of the Octagon, that type of candor is gold. Inside, it can rub some the wrong way, and that was the case during Pena’s six weeks in the reality TV bubble. But regardless of any personality clashes and hurt feelings, she would do it all over again.

“You get a chance to be a part of history, a chance to train with the best in the world and live in a mansion and eat a bunch of free food, and at the end of the day you might get an opportunity to fight for a six figure contract and be crowned The Ultimate Fighter,” she said. “People don’t get those opportunities, and a lot of people would die to be in that sort of situation, so I would absolutely do it again, in a heartbeat.”

What Pena doesn’t point out is that before finding out that the show was accepting female competitors for the first time, she was at an early crossroads in a pro career that began in 2009. Starting out at 4-0, Pena dropped back-to-back fights to Sarah Moras and DeAnna Bennett, leaving her in fighting limbo. Strikeforce?? UFC? Nope. She needed another form of intervention.

“I needed The Ultimate Fighter to get in a hundred and ten percent,” she said. “The phone wasn’t ringing, and I was taking some bad matchups on short notice that I never should have took, and it wasn’t looking too good for me. So when I heard about the opportunity to be a part of the first female Ultimate Fighter, I jumped on it and said ‘this is the moment that I’ve been waiting for.’ And I believe that I was in the right place at the right time and that everything happened for a reason. I was exactly where I needed to be and more than grateful that Dana had changed his mind on that (bringing women into the UFC).”

After defeating Gina Mazany to earn a spot on the final cast, Pena was chosen first by longtime training partner Miesha Tate, and was presumably fed to the wolves when she was pitted against opposing coach Ronda Rousey’s top pick Shayna Baszler for her next fight. Eight minutes and eight seconds later, Pena was off to the semifinals after submitting Baszler.

“When I won my first fight to get in the house, I had a little bit of added confidence because I was coming off two losses, and I remembered what it was like to win and it felt great,” she said. “When I beat Baszler, that was the biggest upset, and it gave me confidence to say, I don’t care what your name is, I don’t care how many people you fought; I am a force to be reckoned with, and if you underestimate me or take me lightly, that would be a mistake on your part. Don’t ever count me out. And it helped me confidence wise because at first I was worrying about the fact that she’s this great fighter who’s fought all these women in the past and someone I’ve seen fight live before.”

Having made her statement, Pena could have slacked off in training or found herself unable to re-motivate herself for the semis, but considering that her semifinal foe was the one who gave her the first loss of his career, Moras, that was all the motivation she needed to get even via second round submission.

“With Moras, beating somebody that I lost to was another boost of confidence and on top of that, there was something that I had to get over,” she said. “I don’t like people coming into my camp and taking pictures of me or sitting there watching just to gawk. I’ll kick ‘em out, straight up. So one thing that I had to overcome was training with Sarah two times a day in the same gym and sleeping five feet away from her. When I beat her, it was another boost of confidence. I don’t need to be worrying about these things anymore, like who’s watching me train. At the end of the day, they’re gonna have to stop me, and I think that the show helped me a lot mentally with my confidence as a fighter.”

Yet as confident as she is, she’s not taking her favorite status this weekend for granted. Far from it.

“I don’t underestimate any opponent that I fight because I did that the first time I fought Moras and it didn’t turn out so hot for me,” said Pena. “Now moving forward, you learn from your past experiences, and I don’t think it’s okay for you to underestimate your opponent. The way that I keep my focus is knowing in my head and truly believing that she is a very dangerous opponent. I take her very seriously, she’s dangerous, and I’m scared.”

Hearing things like that make it no surprise that the ladies have been stealing the show since their arrival in the UFC in 2013. Pena has another theory.

“I think it’s a lot more personal for women,” she said. “We take things a little bit more personal and we’re like psycho women trying to protect our baby cub. We’re not going to let anybody get in the way of our dreams and what we have worked so hard for. I think the women display a lot of heart and they make for more interesting fights. Who doesn’t like to see a girl fight? People love it, and they should. We put on exciting fights and we put it all out on the line.”