Julianna Pena As Hungry As Ever

As She Eyes A World Title Shot, Bantamweight Reflects Being An MMA Pioneer For Latina Women
By Thomas Gerbasi, on Twitter: @TGerbasi • Oct. 13, 2021

As She Eyes A World Title Shot, Bantamweight Reflects Being An MMA Pioneer For Latina Women

Julianna Pena will never be accused of being shy. But when the topic of her pioneering efforts for Hispanic women in the UFC is brought up, she deflects that praise like a prime Anderson Silva made opponents miss.

“That is very flattering and nice, and it does make me realize that I probably hold a little bit more of the cards than I give myself credit for at times,” she said. “And if I can be leading the way, then that's great, and I look to other women, as well, in the sport that are also leading the way like Irene Aldana or Alexa Grasso. I think that they're great fighters and I love that they fight so well and they speak English and Spanish, they're both beautiful women, and they have that fighting spirit that I'm trying to capture in all of my fights.”

Look at the UFC roster when “The Venezuelan Vixen” joined it in late-2013. There were barely any women, let alone Hispanic women, but if you fast forward to today, there’s been an influx of Latinas making their mark in the big show, and leading the way is Pena, who already put her name in the history books as the first woman to win The Ultimate Fighter. That might have been enough for most, but Pena, has always had the charisma and the backstory to go along with her fighting ability, and that went a long way in opening doors for those who may not have the confidence to choose this path in life if not seeing her do it first.

She’s heard that from fans, aspiring fighters and her peers, and it means a lot to the 32-year-old, but all she ever wanted to do was be the best fighter she could be.

“I think just being a woman, in general, has been the biggest honor in my life because I can say that I'm doing this as a woman,” she said. “But, at the end of the day, it's just about honing my craft and being skillful at what I do and just being good at fighting. And you either can fight or you can't fight, and I just want to be good at fighting and be remembered for being an amazing fighter. So, I don't typically put myself into boxes of oh, I'm a woman, or oh, I'm a Hispanic woman.”

Yet Pena did know early on, growing up in Spokane, Washington, that she wasn’t like the other kids at school. 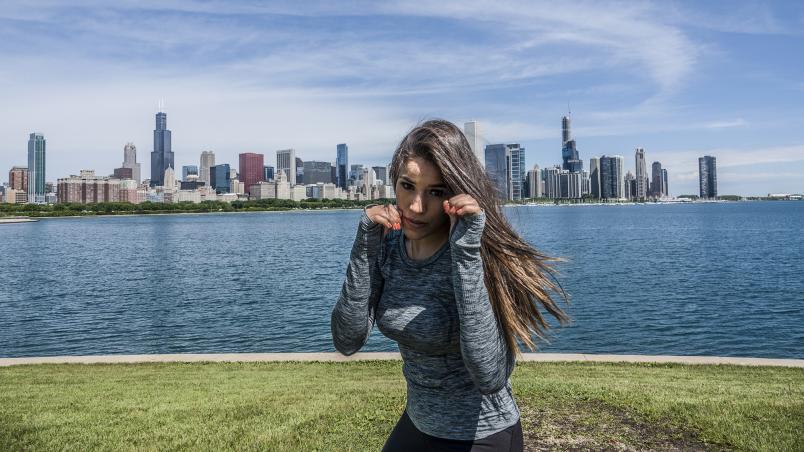 “I was the always the brown kid or the brown one,” she said. “I went to a school where the majority of the kids were white, so I've always grown up as being the minority. It wasn't until I moved to Chicago that I got to the area where I was like, 'My people, finally.' I felt a lot more comfortable and more of a sense of home when I moved to Chicago. But Washington State doesn't have a super dense population of Latinos, that's for sure.”

Not surprisingly, Pena, even back then, wasn’t too concerned with anyone’s opinion, especially if it was negative. She was going to do her own thing and not be held back in any way, shape or form.

“I knew that I was different,” she said. “I knew that being one of two or three kids in the school that had darker skin was always a thing that kind of set me apart from everybody else. But I never let it bother me. I think I embraced it more than my brothers and sisters, that's for sure.”

And though she was still one of the lone Hispanics in the gym once she began pursuing her career in MMA, she went about her business with no restraints and made it to the UFC. But these days in her adopted home city of Chicago, she truly feels at home. 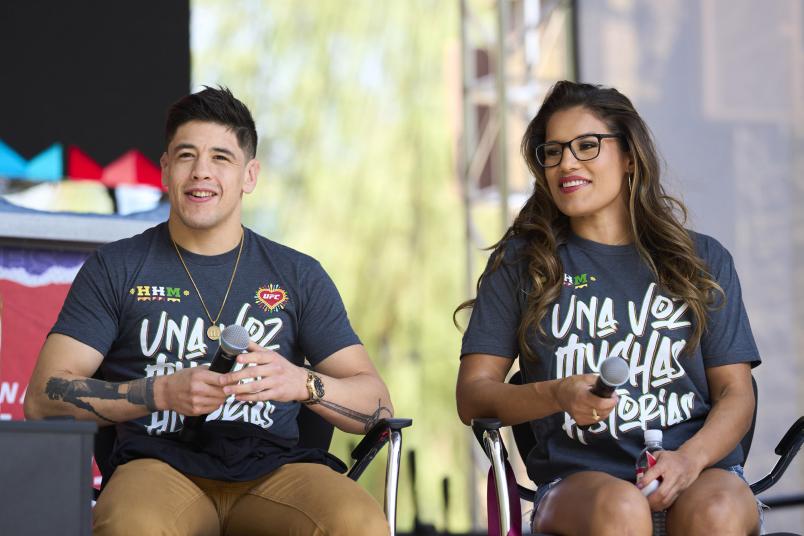 Brandon Moreno and Julianna Pena sit on stage during the Hispanic Heritage Month Athlete Panel at the UFC Fan Experience at The Park & Toshiba Plaza on September 24, 2021 in Las Vegas, Nevada. (Photo by Cooper Neill/Zuffa LLC)

“When I was in Spokane, I was still a minority training in the gym,” Pena said. “But when I moved to Chicago, all of the people in my gym are from Costa Rica, all parts of Mexico, and from Chile and Argentina, so I think in Chicago, I felt more of a sense of belonging. I could go to the gym and play Spanish music and no one's gonna give me s**t for it.”

Pena laughs, as comfortable in her skin as she’s ever been. And life is good for the bantamweight contender, the mom of a three-year-old daughter who is about to challenge Amanda Nunes for the 135-pound UFC title in December. But don’t equate being happy with being satisfied. Pena, fresh from a submission of Sara McMann, is as hungry as she’s even been, and this young lady of Venezuelan descent is eager to show off some Mexican style fighting spirit at UFC 269.

“People want to imitate that style of fighting because it's so fierce, it's so ferocious, it's so 'fight to the death with all your heart,'” she said. “I always try to show that in all of my fights - that no quit, no stop fighting mentality. And I believe it's in our blood.”

And should she leave her fight with Nunes with a world championship belt, it will be both a culmination of a journey and the start of a new one.

With a world watching.

“It (the title) is something that I've been seeing and manifesting and wanting and desiring for such a long time,” Pena said. “It's something that I've been striving for my entire career, and it makes me really emotional to talk about it. I don't know why. Maybe I care too much. Maybe it's something I should just drop and then see if it just comes to me on its own and be done with it and let's see what happens. But, at the end of the day, I'm not in this sport to be at the bottom. I want to be the champion; I am the champion in my head. I am this person that I dream about, I am this person that I say that I am. And I have been feeling like it's just a matter of time, just keep working. It means so much to me as a Latina woman, it means so much to me as a mother, as a sister, as a daughter - it's literally my whole world and I have sacrificed so much in my life for this moment. It's just a matter of time and I'm not gonna stop until I get there. And even when I get there, I'm gonna keep working just as hard to maintain, and that's my goal, that's my life work. I want to be remembered as that person who did not stop until they made their dreams reality.”