Julian Marquez Is Staying True To Himself

Since Making A Splash On Dana White's Contender Series, Julian Marquez Has Been Doing Things His Way.
By Thomas Gerbasi, on Twitter: @TGerbasi • Apr. 2, 2021

Given his charisma and penchant for producing drama inside the Octagon on fight night, Julian Marquez would appear to be a natural to compete on network television. But as his April 10 bout against Sam Alvey approaches, is ABC ready for Marquez?

“ABC has been waiting for Julian Marquez,” he said. “ABC is ready to rock with Julian Marquez. But this is the thing: is ABC ready to be able to blow me up like they're about to?”

It’s the answer you expect from “The Cuban Missile Crisis,” and one that may very well be true, because on this kind of platform, it’s the perfect vehicle for the middleweight prospect to take his notoriety to an entirely different level. Then again, he did that in his most recent bout in February, when a come from behind win over Maki Pitolo was followed by a social media exchange with pop star Miley Cyrus that may have received more attention than the fight.

So when Marquez’ teammate Zak Cummings withdrew from the Alvey fight, it was the 30-year-old stepping in. But it wasn’t because the fight was on ABC. 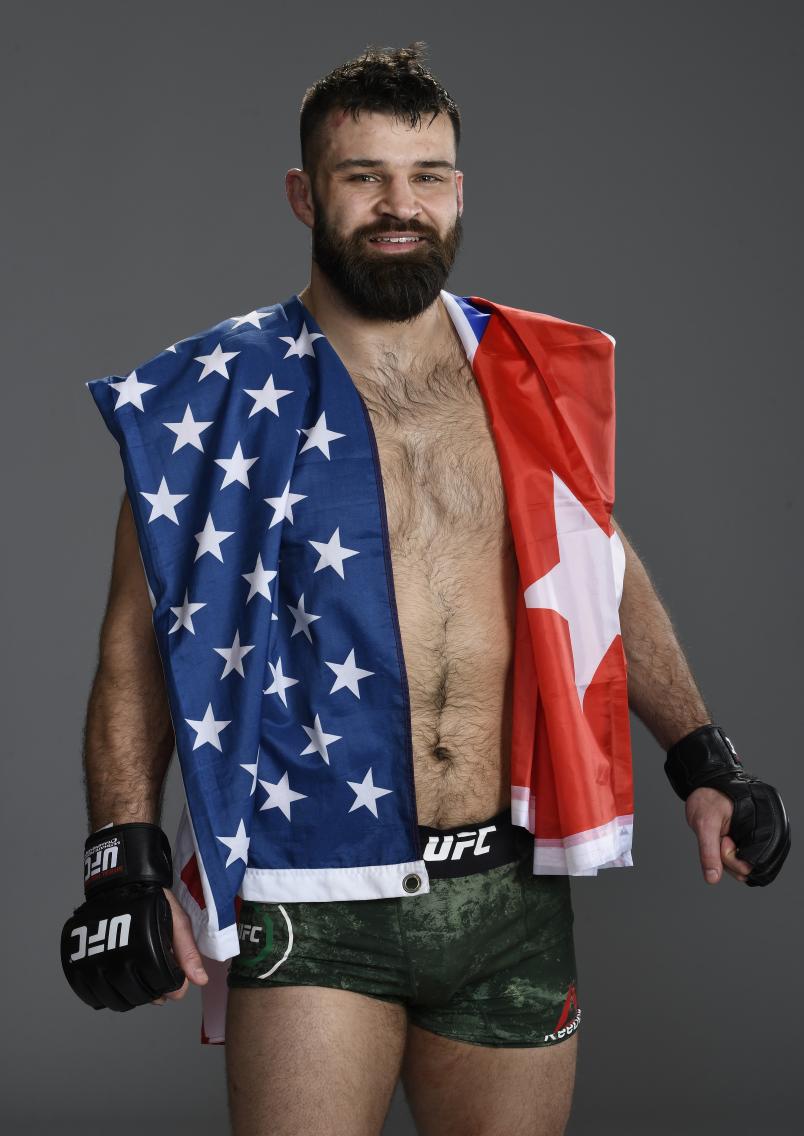 Julian Marquez poses for a portrait after his victory during the UFC 258 event at UFC APEX on February 13, 2021 in Las Vegas, Nevada. (Photo by Mike Roach/Zuffa LLC)

Ah, the 31 months away. That adds even more to the story, knowing that Marquez’ win over Pitolo came after nearly three years on the sidelines recovering from completely tearing his latissimus dorsi muscle in a 2018 bout against Alessio Di Chirico. Then there was the fight itself, where he was down 20-18 on all three scorecards heading into the final round. He needed a finish, coach James Krause knew it, and he let Marquez know it, too.

“For 31 months there was this animal that was inside of me that was dormant, and I didn't know how to bring it out,” said Marquez. “I didn't know where it was at and it's hard to find that. And I've been with James in some tough battles in the earlier part of my career, so James knew what to say and how to bring it out of me. And something clicked in that third round, and he brought it out. He said, 'Finish it, or it doesn't f**king count.' And that moment made me realize if I lose this fight, all the hardships, all the pain, all the hours of physical therapy, all of the highs and lows that I went through during the past 31 months, all the weight loss, everything will get lost and no one would care. And at that moment, he spoke to whatever animal instinct I have inside of me and brought it out. I realized at that moment I'm going for it all. It's either I'm getting knocked out or I'm knocking him out. And he's either got to keep the pace or he's gonna break, and he couldn't keep the pace, and I broke him.”

At 4:17 of the third round, Marquez won the fight, turning from slugger to grappling wizard to sink in the anaconda choke that ended matters in Las Vegas. It was no Hail Mary; it was almost like Marquez and Krause drew it up that way.

“If you look at the finish in my last fight, James started that move, teaching me that same exact sequence,” he said. “For literally four months I drilled that over and over again, and if you watch when I hit that, I trust the process and I got the job done with a sequence that looked smooth. I looked like a black belt hitting that move. Nobody saw it coming.”

Pitolo certainly didn’t, and that’s all that mattered. Marquez was back, he got the most important win of his career, and the internet loved it. It was almost enough to make him forget all the dark days it took to get there, but he never will.

“What happened in the last few years is never gonna leave me,” he said. “The thing is, I knew exactly what I was gonna do before I did everything, and I'm gonna continue to be the same person, I'm gonna continue doing the same things that I need to do to make me advance in this game. In all honesty, I am an elite fighter and I am an entertainer at the same time. I get paid for my looks, and I get paid for my voice and I get paid for my ability to fight, so that's what I'm going out for. Regardless of what happens on social media, that's completely fake. Whatever happens on Twitter and Instagram, that's not reality. The reality may look like I'm on a beach, hanging out next to these beautiful women, but in reality, that's just four minutes of my day because the rest of the day I'm running sprints and I'm hitting mitts and I'm working out. I've been in the grind, I've been in the darkness for a long time when no one else knew who I was and no one else paid attention to me. I was grinding and building myself physically and mentally and emotionally and preparing myself for these moments, and it's not stopping.”

I have to find out about this beach in Kansas City.

“There is not a beach in Kansas City,” he laughs. “But there is a lake with sand.”

It’s that sense of humor, the laid-back social media presence and, of course, his ability to deliver action-packed fights, that have brought him here. But even as he looks forward, he’s not forgetting that it was a return to KC that allowed him to make a comeback many didn’t believe was possible.

“During a camp I spend a lot of time with James,” he said of Krause, the UFC vet who is one of the rising stars in the sport when it comes to coaching. “I lived at James' house with him when I first came to Kansas City. I talk to him every day. He's becoming one of my close friends, and he's my coach. So when I'm in terrible positions in the gym in practice, I talk to him and he'll talk to me. I'll sit there and I look to him for advice to get out of certain situations, so when it comes down to it, it's the fact that I trust James with my life in there. I trust him with the knowledge in there. I trust what he has in his knowledge of MMA to be able to do what he tells me to do. If you believe in him and you believe in yourself, there's nothing stopping me. And that's one thing most people don't have.” 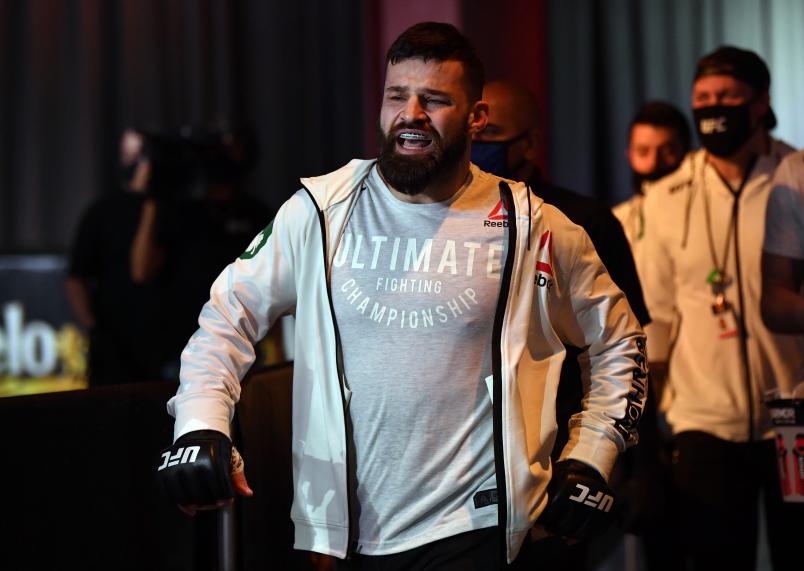 Julian Marquez prepares to fight Maki Pitolo in their middleweight fight during the UFC 258 event at UFC APEX on February 13, 2021 in Las Vegas, Nevada. (Photo by Jeff Bottari/Zuffa LLC)

Marquez has it, though, and he has an army of teammates at Glory MMA who have his back as well. That makes him a dangerous man on fight night, especially when you throw in a never say die attitude that keeps him in there until the final horn.

“That's just a back-up plan,” he said. “You always gotta have a Plan B. You can't have your Plan A be your Plan B, and knowing that just gives me the comfortability that if times get tough, I'm going out on my shield. Win, lose or draw, I'm coming for it all.”

On April 10, he’s coming for Sam Alvey. On ABC. But don’t think for a second that potential stardom is going to change him.