Throughout His Combat Sports Career, Julian Marquez Has Treated Fighting Like A Marriage — Filled With Unwavering Commitment, Enduring Of Hard Times and Relentless Perseverance
By Thomas Gerbasi, on Twitter @TGerbasi • Jun. 15, 2022

“You love your wife, right?”

The interview with Julian Marquez had taken an interesting turn. It’s important to note that the middleweight up and comer always delivers the goods in a chat, but this time he was raising the bar when I asked him why he still fights after his body has betrayed him numerous times and when he has other life options.

Marquez continues, building off a quote from author and motivational speaker Simon Sinek.

“Is there a certain day that you knew this is the moment you loved her? No, you can't answer that. You fell in love because you went to the refrigerator to get a drink and you came back and gave her one without asking. You woke up and made sure that you told her you loved her before she said it, or she came home and had a s**t day and you had a wonderful day and you listened to whatever she had to say and she was able to vent to you. It was just time and time and time that grew that bond over and over and that's what this sport has done to me.”

It has been a marriage for Marquez and combat sports for most of his 32 years on this planet. From wrestling to MMA and everything in between, there has been good, bad and ugly, but he’s remained faithful, continuing to show up every day, ready to work, ready to learn, and then…ready to fight. 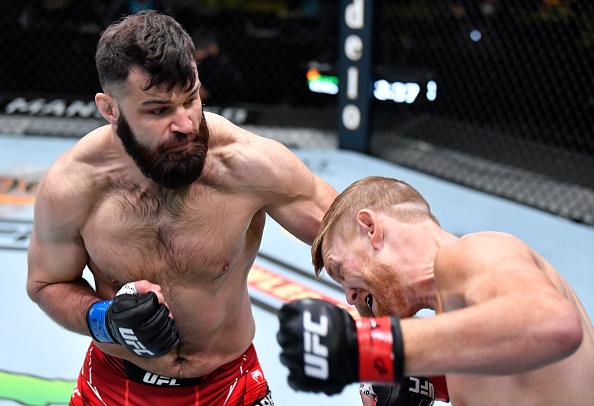 “The sport has given so much to me,” he explains. “When I needed to have confidence as a young man growing up, I would show up to the gym and slowly find my confidence. And as a young man just trying to look fit and look better, I would go to the gym and it branched me into general fitness and weightlifting, and I do that so that I could look way better and feel better about myself. And over time, these little things added up with this sport to the point where it became something that I enjoyed doing. And I don't want to give it up. I have so much passion for this sport for what it's given me.

It gave me a career, it gave me a life outside of the UFC. It gave me a closer bond to my family and some of the best friends I ever came across, and it gave me some of the greatest connections in the world. Over time, this sport has given me so much and brought me into connections with so many people that I don't think I would have had, had I not been a part of this sport. It is something that I love, and I show it every time I go out there. I have a very win by the sword, die by the sword style.”

On Saturday, the Kansas City native makes his first start of 2022 against Gregory Rodrigues. It’s an explosive matchup for a fighter used to explosive matchups, and after back-to-back bonus-winning finishes, more of the same is expected in Austin. That’s good for the wallet, but just getting back to the Octagon after being sidelined since April of last year is a positive. Then again, if Marquez isn’t the most positive fighter on the roster, he’s at least Top Five. 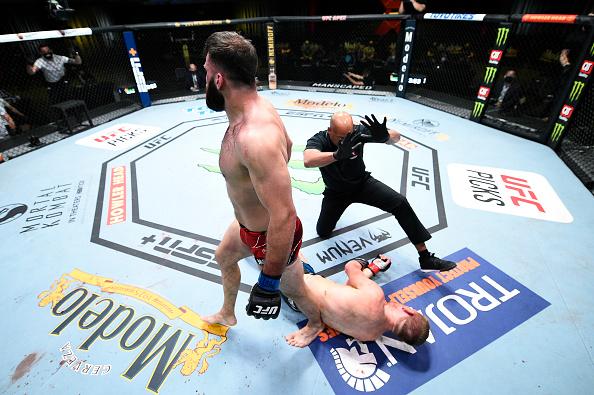 Julian Marquez reacts after his submission victory over Sam Alvey in a middleweight fight during the UFC Fight Night event at UFC APEX on April 10, 2021 in Las Vegas, Nevada. (Photo by Chris Unger/Zuffa LLC)

“I've been down this road thousands of times,” he said. “I have a great team, I'm in a great location, I'm finally where I need to be, and honestly, when I started looking at what I do for a living, this is part of it. This is part of the challenge. I could literally walk outside one day and I could get hit by a car and that can change everything. You have all these things - people are getting injured, people are having to pull out - and we're in a combative sport.

We're not like baseball, we're not like basketball, where we can play over a hundred games a year. Even then, those guys are getting injured and taken out for a long period of time. So you can't help that. You can only do your best to try to make sure you don't get injured. And even then, it's one day of the year that it happens. For me, it's twice this year. But it is what it is. There's nothing you can do about an injury. You just have to suck it up and go about your day.”

For reference, consider that Marquez hasn’t endured a couple jammed toenails or a knee scrape over the years. Starting as early as high school, Marquez has gone through injuries that would have made most call it a day.

“When I was 17 years old, I broke my elbow cap,” he said, and if you’re cringing while thinking of that, it gets worse. “In Greco wrestling, I landed very awkwardly and it just snapped my elbow cap. I had to get plates, and I realized the plates didn't work after five weeks, and I had to go back in and get a wire, and then I had to get it removed. I was out for nine months. I had that injury, and then in wrestling in 2010, I ended up sliding my kneecap underneath the muscle to where I had to go get surgery to let it free float again. It absolutely sucked, but I learned over time that it is what it is.”

In 2018, Marquez completely tore his latissimus dorsi muscle, costing him over 30 months of his career.

“It took my arm getting ripped off in 2018 for me to understand how injuries were,” he said. “These things I cannot control. I can't get mad at it because I signed up for the most intense and ruthless training I've ever had in my life with MMA, and you're bound to get injured when training.”

But don’t think that Marquez is showing up to the Glory MMA gym on a daily basis and hoping for the best. He has adjusted his training like so many of his peers to make sure he’s training smarter and not harder as he gets older.

“Now training has evolved and we're all learning as students of the game and our coaches as well are learning how to train to where we take the least amount of damage,” he said. “Glover Teixeira does not spar a hundred percent every single time he goes in there because if he did, he wouldn't do what he does at 42 years old.”

Does “The Cuban Missile Crisis” have another ten years in him to compete at this level? Time will tell. But I’m guessing that if you gave him that option, he would embrace it. Remember, it’s all about the love.