Julian Marquez recovered from a devastating injury and now just wants to entertain the world in the Octagon again
By Thomas Gerbasi, on Twitter: @TGerbasi • Apr. 4, 2020

After completely tearing his latissimus dorsi muscle in his July 2018 bout against Alessio Di Chirico, Julian Marquez said he was always confident that he would ultimately grace the UFC Octagon again.

His doctor wasn’t so optimistic, telling him point blank at an appointment in Chicago that his ninth pro fight may have been his last.

“The doctor looked at me and said, 'I don't know if you're gonna make it. You might have to find something else.' He said that. We did the x-rays, we did the MRI, we did everything. I'm still sleeping in a hotel in Chicago with my stepmom. She witnessed me cry, she saw me at the lowest point because he told me that I may never fight again.”

The next day, Marquez was sent back to his adopted home of Las Vegas with best wishes and an order to call the doctor in three months. Then “The Cuban Missile Crisis” went to work.

“For three months, I sat there and did everything I could with physical therapy,” he said. “I went through pain, I went through agony, I went through tears, I went through hell and back to make sure this arm would come back. And then one day, something snapped in it and dropped my shoulder to the point where it allowed it to release and lift up overhead with minimal amount of pain and then I realized right then and there, boom, whatever that was that was blocking me was gone. Since then we've been strengthening it up, getting it ready and we're ready to rock.” 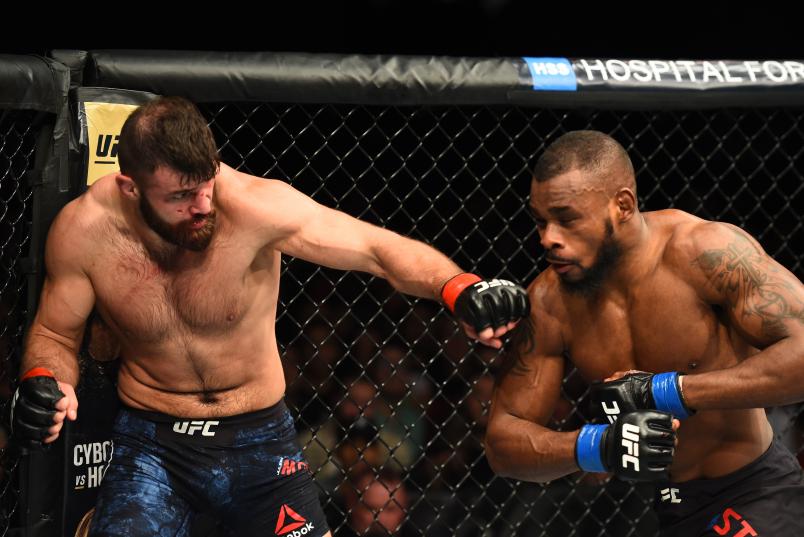 Marquez, 29, is serious. So serious that when he thought there might be an opportunity to fight last month on one of the cards ultimately postponed by the COVID-19 situation, he threw his name in the hat.

“This is how down I am,” he said. “I tried to get on the card in March right before the world went on lockdown. I said I'll take a fight at 205, heavyweight, whatever you need. I'm ready to get back in there, I'm ready to throw hands. I'm an entertainer. I'm here to entertain the world, I'm here to do this. I've been out for so long that I've been studying film, studying a bunch of different things that can change the game. And I've been waiting to be on the mic. You put me on the mic, I'll change it. I promise you that.”

If you can sense enthusiasm through a phone line, Marquez has got more than his fair share of it. Then again, he’s always been an engaging sort with a personality that had him on the fast track to big things in the middleweight division before his injury. But consider that on the card he got injured on, that night’s headliner, Israel Adesanya, went from prospect to contender to champion to star, all while fighting five times. None of this is lost on Marquez.

“Urijah Faber came out of retirement during my injury time,” he said. “Alessio Di Chirico has booked four fights since then. There's been almost two seasons of the Contender Series since I fought. The world keeps going and it doesn't harm me at all. I know that Israel Adesanya, it's his time right now. It's his time to shine, his time to blow it up and I'm so proud of him. I'm happy for what he is doing in our division. He's talking, he's showing people that skill and a voice can change a lot of things. And also being fun. He doesn't sit on the mic and just talk about the basics of MMA in an interview. He goes above and beyond. He makes it fun, makes it interesting, he draws people in and that is what entertainment is about.”

Suffice to say that Marquez didn’t lock himself up in his room, pull the shades and refuse to be associated with anything MMA related. In fact, he took the opposite route, throwing himself into the sport and its culture in any way possible.

“Look, this is who I am, this is where I want to be,” he said. “I didn't move from my lovely home in Kansas City where all my family is, the place that’s the mecca of my heart, I didn't leave that area to come out here just to be average. I came out here to do what I have to do. I want to be involved in it. I'm doing everything I can to make sure that when life is done fighting, I'll have something that consistently stays with fighting.”

Maybe it’s that enthusiasm, dedication and willingness to stay in the public eye while he’s been out that has kept his fan base growing. Simply put, they want to know when Marquez is coming back and has more to do with him than his six knockout wins, finish of Phil Hawes on the first season of the Contender Series and Fight of the Night victory over Darren Stewart in his UFC debut in 2017.

“I think my personality and who I am and what I'm doing to keep myself ahead of the curve is what's keeping me alive in the fans' eyes,” said Marquez, who is also respected and liked by his peers for his hospitality when they come to Vegas to use the UFC Performance Institute.

And though his comeback is on hold at the moment, that’s by no fault of his own, so as he stays active in whatever way he can in the current climate, Marquez’ fans can at least take solace in his answer to the question of his return.

“I got the green light and I'm waiting for a date.”